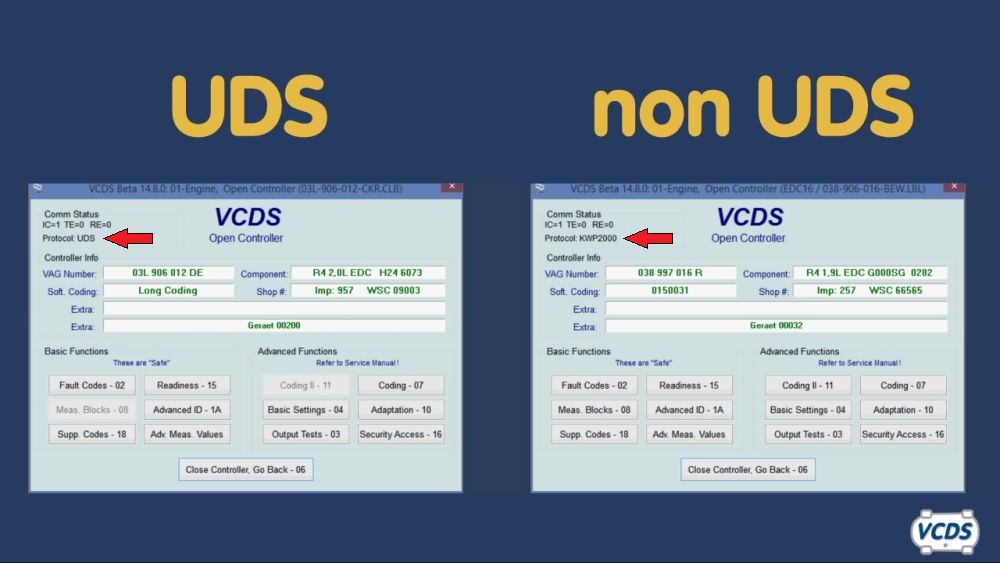 To keep things super simple for this post... there are two types of control modules in our vehicles, UDS and non-UDS (legacy). UDS type modules were introduced around 2009 with some instrument clusters. As time went on, other modules went to the UDS protocol. With the 2015 Golf, all modules in it are UDS type.

To identify if the module you are working with is UDS, on the Open Control screen, look at the Protocol which is in the upper left section. If the module is a UDS, then it will list UDS. If the module is a non-UDS (legacy) type module, then whatever protocol said module listed will be shown.

With UDS modules, to view data, perform Basic Settings or Adaptations, you have to pick from a list. Notice that even [Meas. Blocks - 08] is no longer an option for UDS modules. This isn't because we, Ross-Tech, though that would be fun, but rather, this is what the Germans have done.
Last edited: Oct 5, 2018
Dec 15, 2014 #2

Jef said:
UDS type modules were introduced around 2009 with some instrument clusters.
Click to expand...


Jef said:
With UDS modules, to view data, perform Basic Settings or Adaptations, you have to pick from a list. Notice that even [Meas. Blocks - 08] is no longer an option for UDS modules. This isn't because we, Ross-Tech, though that would be fun, but rather, this is what the Germans have done.
Click to expand...

And you should see all the nonsense we have to go through to provide lists to pick from!

I made this draft post a while back but never "published it". We can merge my stuff together with Jef's stuff to make a mad goulash with it:

This thread is intended to address frequent questions from customers about control modules that use the "new" UDS/ODX protocols. These first appeared circa 2008 in cars like the 8T/8K Audi A4/A5. Before UDS ("Unified Diagnostic Services"), Measuring Blocks used somewhat standardized numbers (like group 115 shows requested and actual boost pressure in many drive by wire gasoline engines) and fault codes had fairly consistent numbering. For example, in a 1993 Golf 2.0 ABA, if you got a fault 00532, VCDS would interpret that as "Supply Voltage B+: Signal too Low" or something like that. In a 2006 Audi A8L, the same fault would have the same meaning. The scan tool didn't need to know anything about the type of car in order to give you the fault code meaning.

That all changed once UDS came along. My understanding is that the big European automakers, along with their suppliers, decided to get together on some common diagnostic "language" that would reduce differences for example, in what Bosch would need to do for control modules going into Volkswagens compared to the same type of modules going into Mercedes. In theory this could have resulted in our software being really useful (beyond just Generic OBD-2) on other brands, right? Wrong! What the ISO 15765 (UDS) did instead was to put in an extra layer of translation that was needed to interpret fault codes, measuring data, etc. So now when you get a fault code there is no way to know what it means unless you have a special translation file UNIQUE TO THAT SPECIFIC TYPE OF CONTROLLER. This is a colossal PITA for scan tool manufacturers like us since we need to maintain special files for every type of control module.

Anyway, on to practical matters, this is what it looks like when you are communicating with a control module that uses UDS: Notice the top left corner shows "Protocol: UDS" and there are some functions that are simply not available like Measuring Blocks (since there are no longer any measuring block numbers). Instead you will need to use the Advanced Measuring Values function where you pick from a list of possible things to measure:

If the Advanced Measuring Values button is grayed out then that means there is no ROD file (the translation file needed for that specific type of control module). If that happens, the first thing to do is to ensure you are running the LATEST version of VCDS:

If a Beta is available then use that:

If the ROD file is still missing and you see some message like ' No ASAM data for: "EV_ECM14TFS01104E997016B" (VW37) ' and you have made sure you are running the latest version, then please send us an AutoScan.

Many of you are (or should be) familiar with the process used on older pre-UDS control modules when you found ones with no label files:

Sending us PLA and PLB files for those old style controllers is a great way to help us to incorporate documentation for the missing stuff in new versions of VCDS. Unfortunately, with UDS, no such files are possible since a ROD file is needed to even READ any of the data at all. That means as much as you'd like to help, the only thing you can send us is a regular AutoScan:

On a related note, UDS modules still have label files as well, for things like Coding and Security Access. If you come across a control module that uses UDS but has no Label File, then again no PLA or PLB would help us to create one. Just send us an AutoScan instead.
Apr 10, 2015 #4
M

Can i ask if UDS channels in Advanced measuring blocks are the same for all UDS vehicles?
E.g. will channel 002 always be Absolute Intake pressure (as reported in my vehicle)?

Also is there a list of UDS channels and their corresponding descriptions avail or is there a way to print these in VCDS.

Nope, the channel numbers vary wildly and there doesn't seem to even be as much consistency as there is with the older style, often inconsistent Measuring Blocks numbering. Really, the only way to know what is there, is to connect to the module and click on each channel to see what (if any) data is there. Frustrating, I know, when there are 700 or more channels to choose from.
Apr 12, 2015 #6
M

Andy said:
Nope, the channel numbers vary wildly and there doesn't seem to even be as much consistency as there is with the older style, often inconsistent Measuring Blocks numbering. Really, the only way to know what is there, is to connect to the module and click on each channel to see what (if any) data is there. Frustrating, I know, when there are 700 or more channels to choose from.
Click to expand...

As of 15.7, VCDS has a "UDS Aggressive Mode" checkbox in the AutoScan screen (it has been in the Fault Codes screen for a while). By default this is checked and VCDS will try to retrieve all fault codes, even ones that may not be shown by the factory scan tool, depending on which mode the factory technician is using. You can uncheck this box to more closely correlate your results with what would be seen by the factory scan tool in "Self Diagnostics" mode compared to their more aggressive checking in "Guided Fault Finding" mode.
Nov 22, 2015 #8
S

Is there a way to print out all the data channels available (Advanced meas. values) for a controller I am currently connected to, please?
That would be useful sometimes when in battle with huge amount of unknown data fields... Just to let me know what is\is not available to watch.
For this moment I do this "simply" by making printscreens of all tada channels. Sometimes 10 sheets of papers, omg

Starting with 18.1 there may be additional Extended UDS fault code information available in some UDS modules, but only when using a HEX-NET or HEX-V2 (our current interfaces). Here's an example (in bold):

Keep in mind that some Extended UDS fault info may be in German or in abbreviations, etc. If you are using one of our older interfaces you will see this text instead:

I like. Is this really dependent on the new hardware generation?

hadez16 said:
I like. Is this really dependent on the new hardware generation?

I think it's primarily a consideration of where we are focusing our efforts for new features.

I’m finding on my lads Audi A3 I’m getting loads of ( UDS ***** support by current gen interface ) I have a hex can lead , what do I need so I can see where these faults are ? , ie which module ? Is this possible now, and is it a hex-v2 I need. Will this read these codes, the car is a 2017 Audi A3 s-line, we had car stolen , but recovered and had some fire damage to under bonnet( failed destroy of evidence ) I’ve repaired all the wiring, but trying to find if modules are damaged , and worried ecu damaged from wires touching each other’s ,funny enough only 3 fuses had blown, but I have faults on all modules , but most come up with message UDS ***, sorry to baffle on , will another Ross-tech cable help me, or do I need to buy a different cable /software and move on, thanks guys, always loads of help ,
Jun 6, 2019 #13

To fully support UDS modules you'll need either a HEX-V2 or HEX-NET interface.

If you bought your HEX-CAN from the UK distributor you should be able to get an upgrade deal.

Might first be worth posting the Auto-Scan you get on your lads A3 so the experts on here can offer some helpful suggestions?
Friday at 9:48 AM #14
H

This thread is quite old; has any progress been made on this problem?
Friday at 9:57 AM #15

Huntsman said:
This thread is quite old; has any progress been made on this problem?
Click to expand...

Bruce said:
To what problem do you refer?
Click to expand...

The problem that VAG seems to have made Measuring Blocks - 08 need a work around in VCDS due to the introduction of UDS.
Friday at 12:07 PM #17

Measuring Blocks - 08 - is used for Non-UDS modules as explained in the first post of this thread.

Where is the problem?

UDS control modules may have thousands of measuring values. Non-UDS modules do not have near the number found in the UDS modules. The engineers at VAG wanted more values available. They had to create a new means to have the values reported.

Again I ask, where is the problem? We learn new ways and develop new methods to work with the new ways.

Care to tell us what your problem with UDS Advanced Measuring Values might be?
Friday at 1:53 PM #18

I find this rather amusing. Back ~20 years ago when diagnostic software was a relatively new thing, people used to working on brands other than VAG were not happy that VAG was using numbered groups of measuring values and adaptation channels rather than simply naming individual values and channels like most other manufacturers. But people eventually got used to that, and now, where UDS is universal and only gives them individually named values and channels, they're upset that the old scheme has been deprecated.

I'm not upset, sigh; Just confused when I see a video of how to use a tool and then I find it does not work that way.
You have explained that. I have said I sort of understand that.
In another video I have seen the guy says the naming may not match your idea of what you are looking for!

In the help docs, there is an example of how to create a list to interrogate the system and save the list. So I wondered if you or others had sample list. For the sake of an example, show all the values relevant to the charging system.
Friday at 7:23 PM #20

Huntsman said:
For the sake of an example, show all the values relevant to the charging system.
Click to expand...

Continued in your original thread.