...just like my DIY Mighty Dodge plug-in hybrid (which is getting tested right now to see if it will prevent a moderate snow from sticking to the roof/windows).....

Yup, volt has the app with remote start/onstar/etc.

I'd suggest get in the habit of 'pre-conditioning' in the morning before shower/breakfast etc, this will of course get cabin temp comfortable, but will also sort of 'break the seal' on the over night charge, causing the charging system to top off the charge (given sufficient time of course), which helps extend your usable drive range.

There is probably a time limit on the remote start, on the volt is like 15 minutes run time, and you can do it at most twice, then you have to start it normally.

I tried to capture the fake engine sounds from the exterior sound generator but it’s a bit tough to hear over the sound of ice (and salt :-( ) crystals crunching under the tires:


Also from the factory (I have made no VCDS tweaks at all yet) you can turn the ESP completely off just by holding down the ESP button (a brief press gets you ESP Sport). 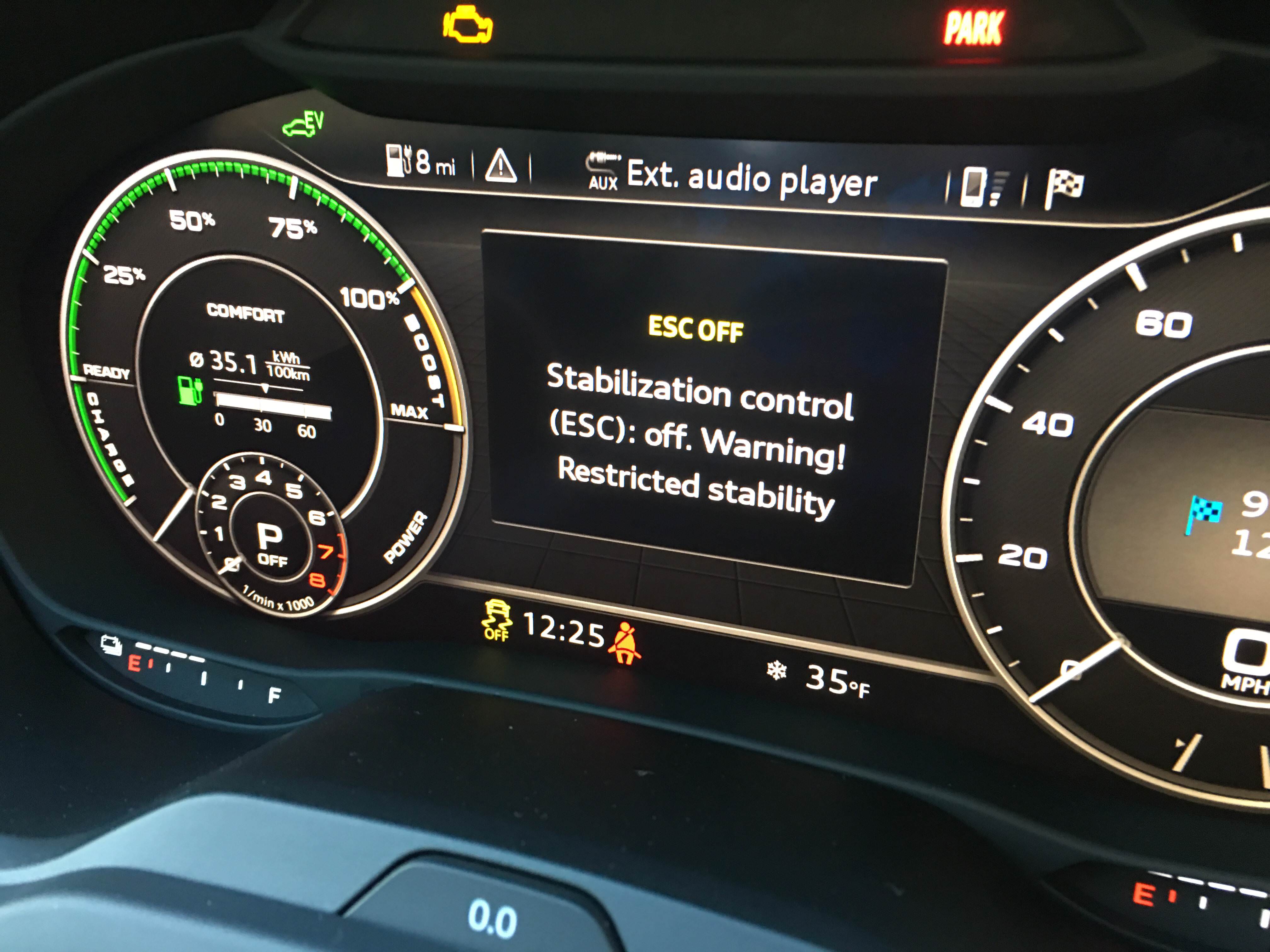 Andy said:
Also from the factory (I have made no VCDS tweaks at all yet) you can turn the ESP completely off just by holding down the ESP button (a brief press gets you ESP Sport).
Click to expand...

Can you set the engines sounds? to VR6?

NZDubNurd said:
Can you set the engines sounds? to VR6?

Although I think that the VR6 is VW's best sounding engine, Lamborghini is also under the VAG umbrella and would probably make better fake engine sounds.....
Dec 11, 2017 #147

The Mk4 R32 is the best sounding engine of all time, IMHO.

NZDubNurd said:
Can you set the engines sounds? to VR6?

if only we could change the sound file.

This morning before leaving for work, I pre-heated the interior using the HVAC while still plugged into the wall: 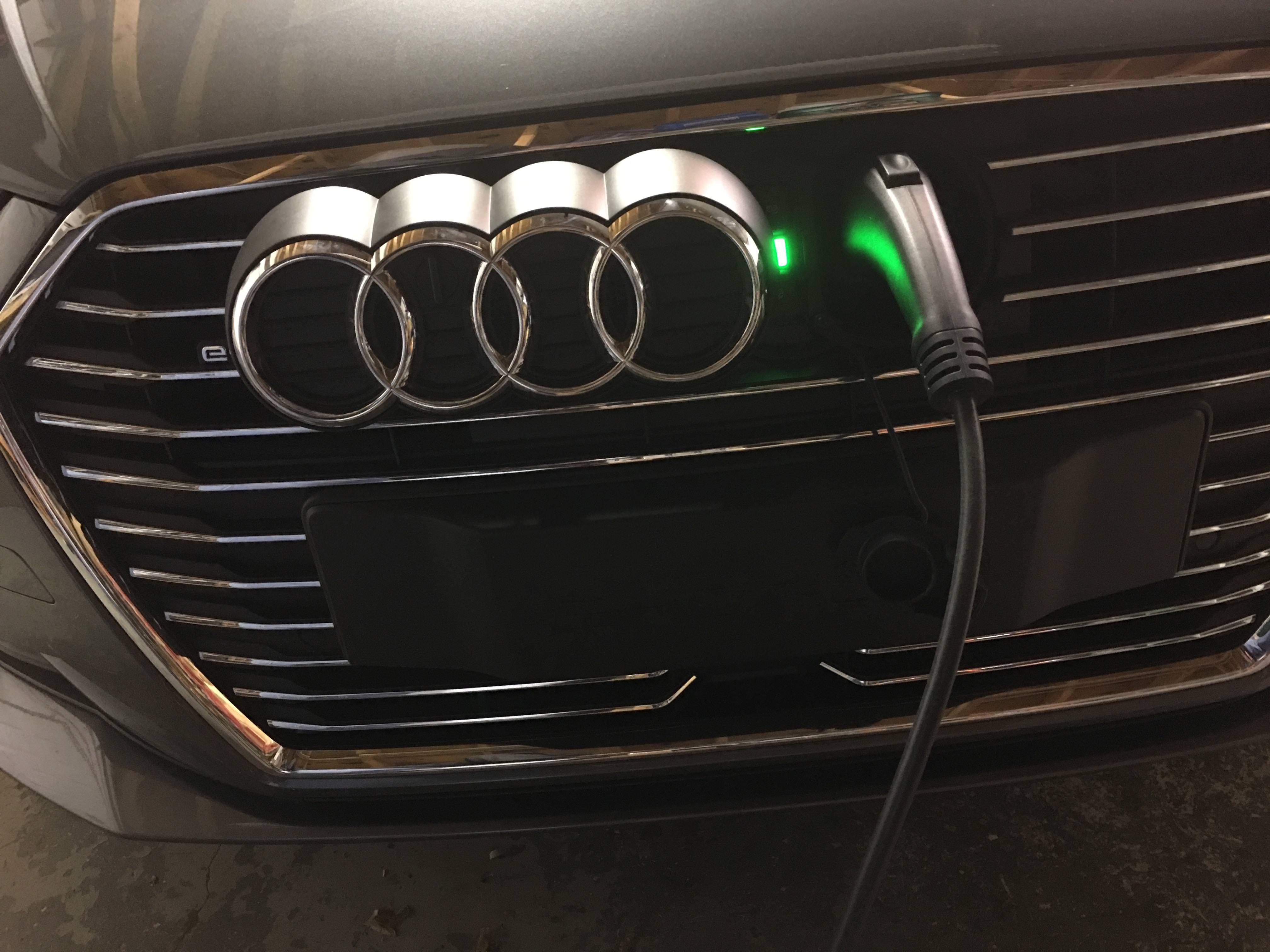 It looks like it's pretty binary so the app (or a timer) will turn HVAC onto whatever setting you last left it before you shut the car off, so I set it to high and full fan.

Starting from an indicated 24 miles, I made it the 5.1 miles to work including a kid stop with 17 miles indicated remaining: 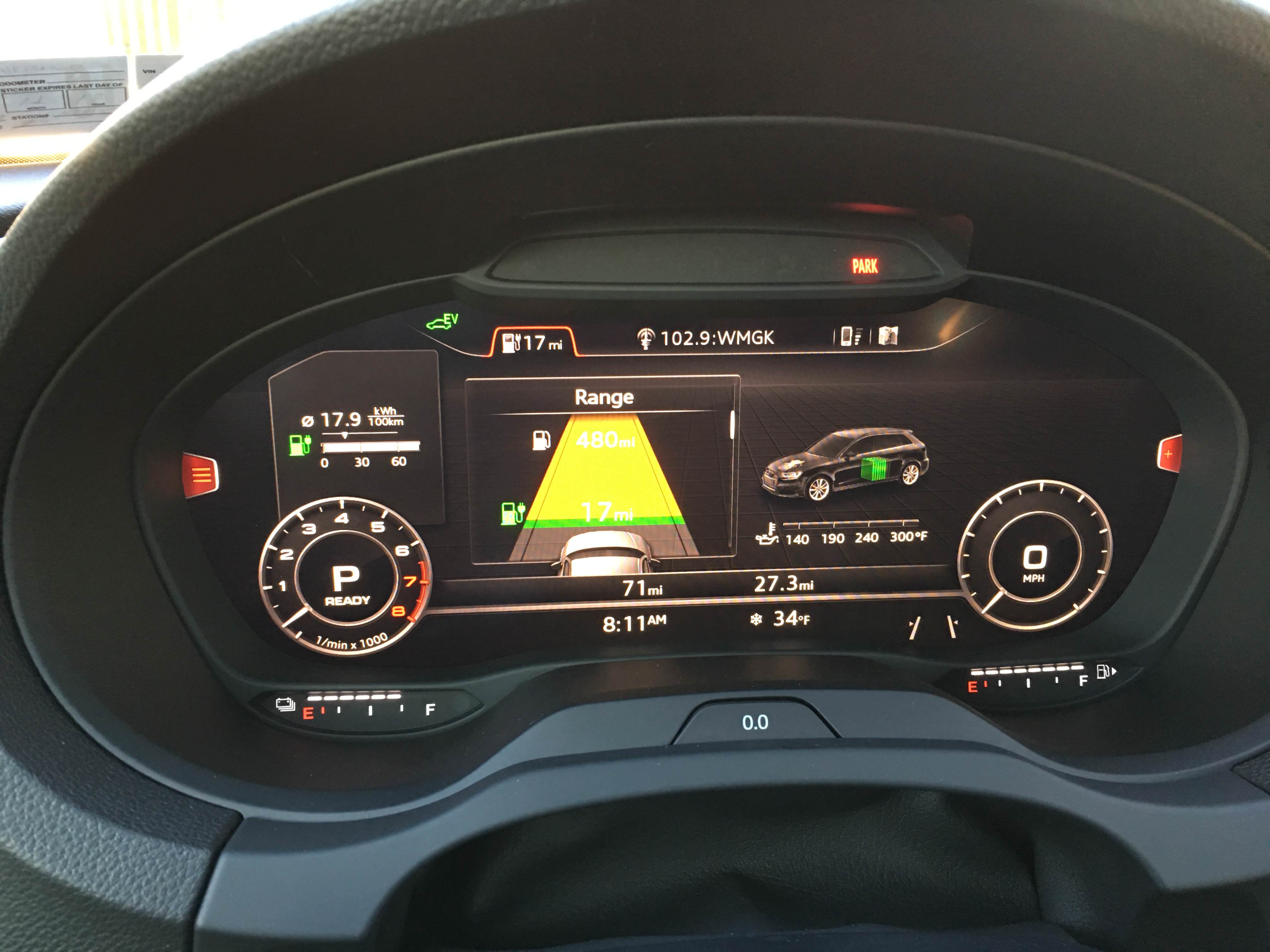 I tried to get away without using HVAC at all but the windows started to fog up a bit so I put the temperature to full cold, put it into ECON by push the A/C button, and ran the fan on low which cleared the windows nicely. I also gave myself the luxury of one click of heated seat, which resulted in apparently less than one mile of expected penalty: 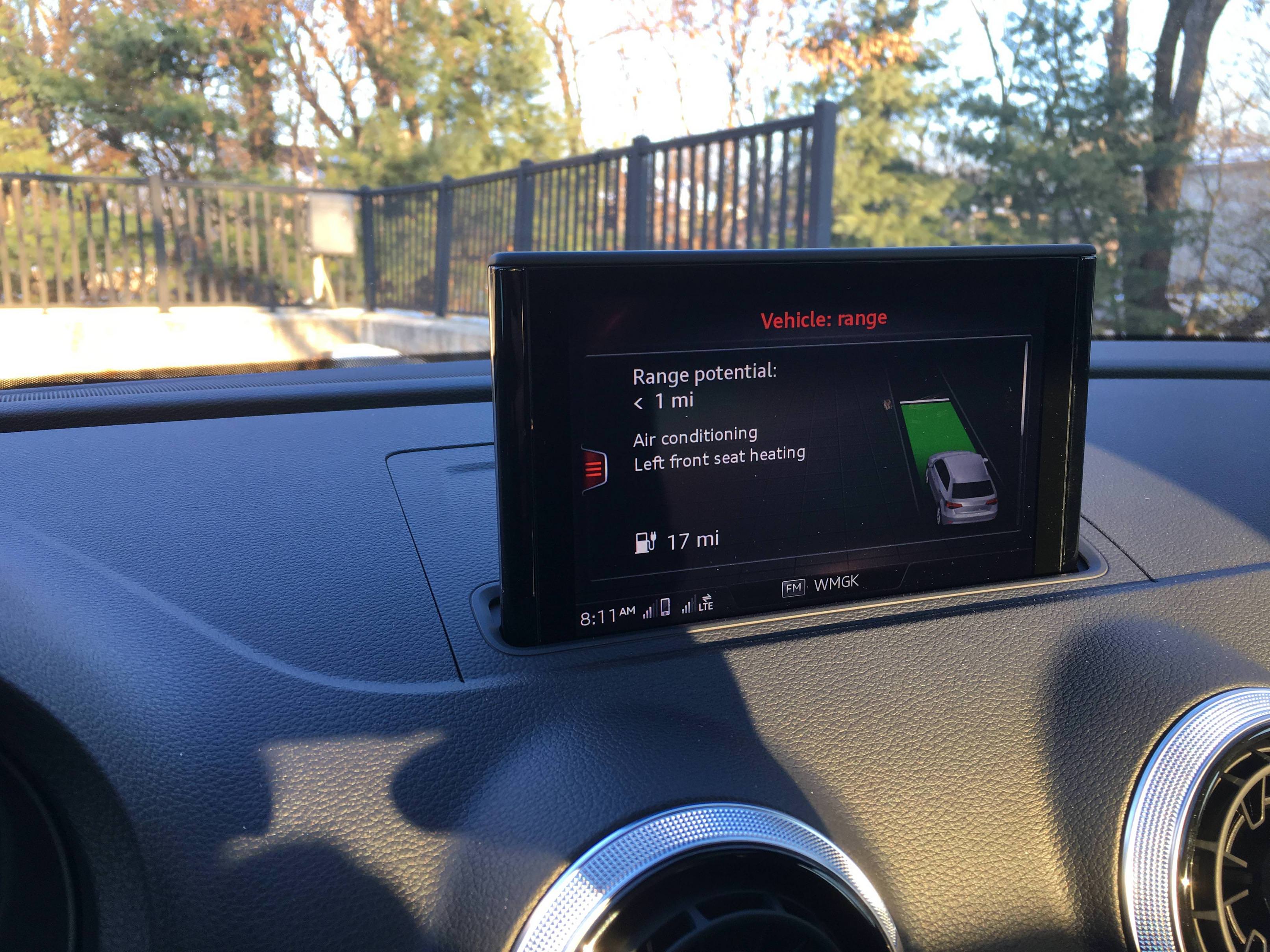 Andy said:
The Mk4 R32 is the best sounding engine of all time, IMHO.
Click to expand...

not sure why, but AC supposedly has a low range penalty, but heat is a major drag.

on my volt it's a double whammy, crappy electric heat and high drain. I guess 2nd gen volts suppost to have a better hvac.

if the AC is so much more efficient, I never understood why they are not using a reversible heat pump type hvac.
Dec 15, 2017 #152

I heard a funny rumor about why Elon Musk wants to launch his Tesla Roadster to Mars on the Falcon Heavy test flight. At the speeds necessary to fly to Mars, the Tesla Roadster would undeniably be the fastest automobile ever made.

One small step for EV's, one giant leap for range anxiety.....

A pretty neat GTE (same drivetrain as my e-tron) and e-Golf review here:

another entry to the PHEV line up

Good video above and its great to see the hybrid vs full electric compared on the road.

@ Andy, I had assumed your e-tron was quattro, but now I am wondering if it is FWD only since they are shared platform with gte?

Yup, the A3 e-tron is FWD only. It's really pretty much a GTI with some fat friends always riding along in it.

For anyone who wants to own Canada's answer to the Reliant Robin.....

Electrameccanica's Solo is a single-seat EV commuter car
Legally drive in HOV lanes all by your lonesome.

If you're looking for an electric vehicle but don't need the extra seats (or long delivery times) that a full-sized Tesla Model 3 demands, you could always take a shot with the Solo. This electric vehicle from Canadian startup ElectraMeccanica Vehicles Corp, boasts a 100 mile range and a $15,500 price tag.

The Solo is designed specifically for the urban commuting crowd. In addition to the 100-mile range, the Solo cna hit 85 MPH, making it legal to drive on highways. What's more, since its fully-electric, the car qualifies for HOV lane access in number of states.

The lithium ion battery pack requires a 6-hour charge on 110V to hit full capacity -- half that with 220V. It's modest interior offers basic amenities like a heated seat and radio, though it does boast a surprising amount of cargo space with a storage nook behind the driver and a carry-on luggage size compartment in the vehicle's front boot.

ElectraMeccanica is asking $15,500 for the Solo, though qualifying state tax credits can drop the MSRP by up to $5,000. Interested buyers can put down a refundable $250 deposit and the company expects to begin shipping Solos out to those reservations by the end of 2018.
Click to expand...

I did some logging on my commute in this morning and found that the transmission doesn't seem to let the electric motor go faster than about 4k rpm without the gas engine running: 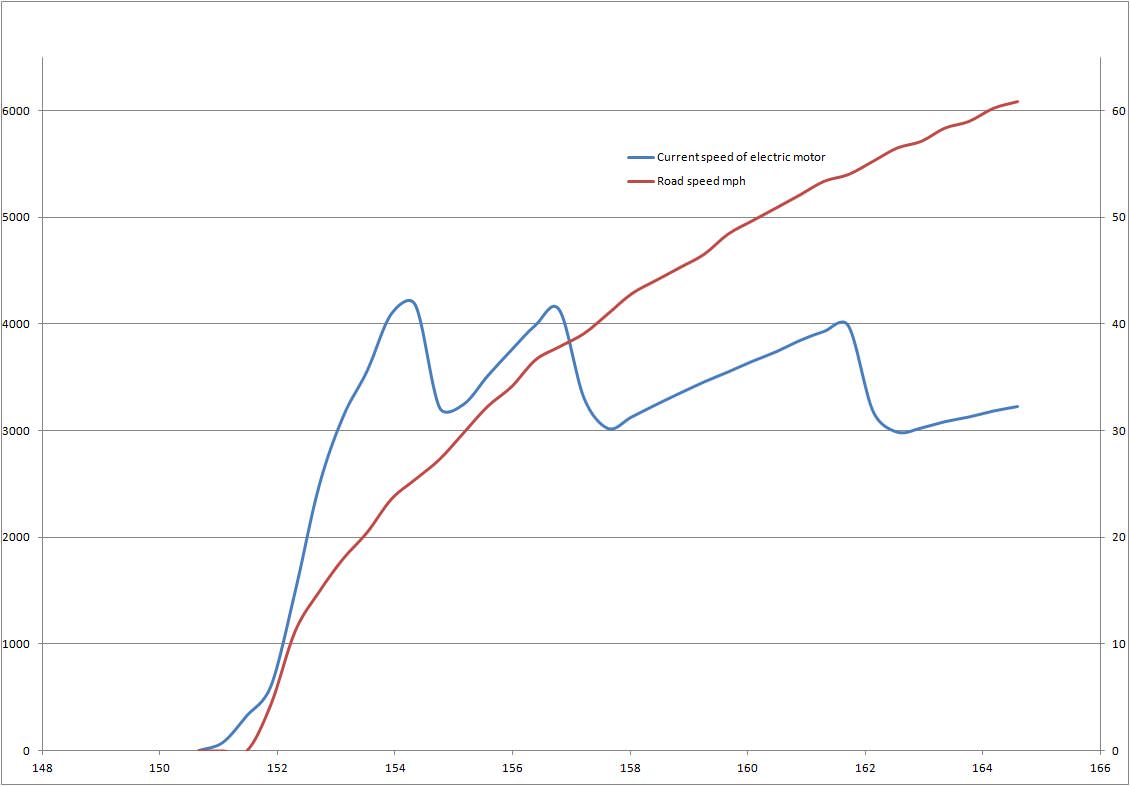 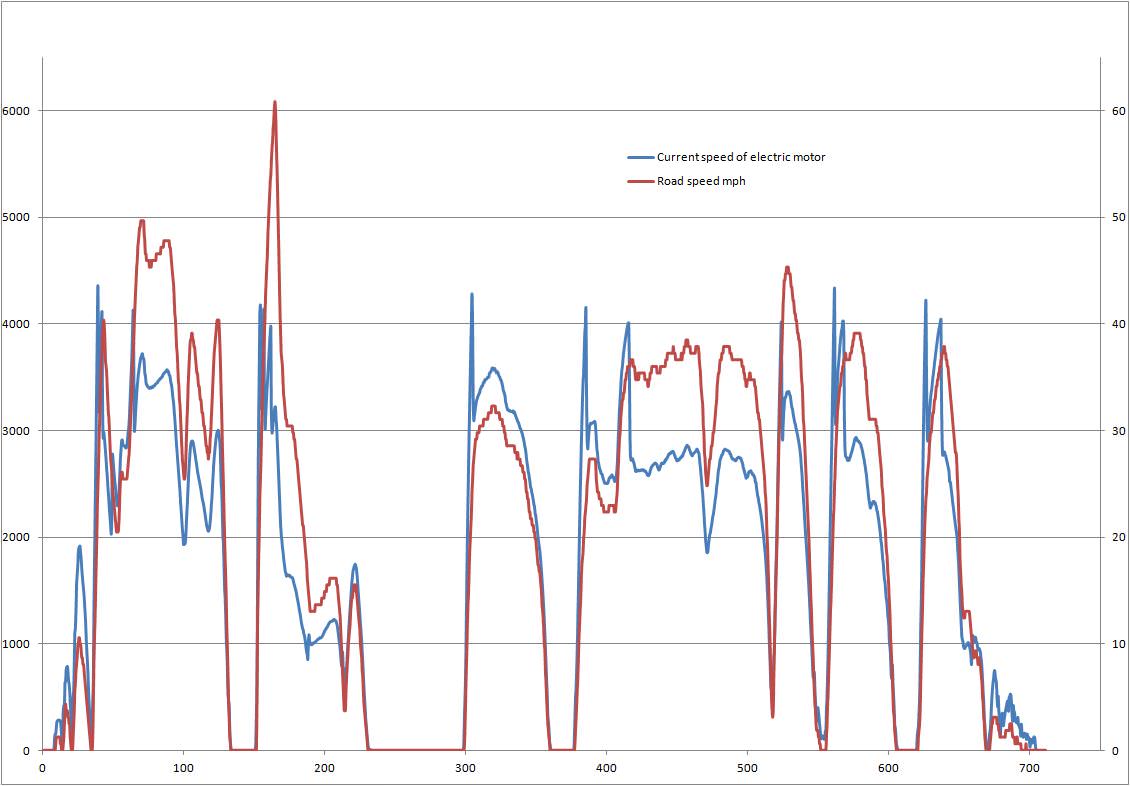 I drove with it in manual mode the whole way so it was upshifting on its own. Since the electric motor must turn when the engine is turning, it's clearly capable of 7k or so.
Jan 24, 2018 #159

Although not strictly an EV issue, it would seem that Tesla's "Auto-Pilot" is no better at detecting large, stationary objects (like a fire truck) than any "legacy" car company's ACC: