Updated to Release 21.9 and Having Trouble? Read This Thread

In the past, we have gotten some reports from customers of "stuff not working" after updating VCDS. The natural human inclination seems to be to blame the last thing that has changed but we have found explanations and resolutions for most of these cases. Therefore, here are some things to try if "it doesn't work".

1) Make sure you have downloaded Release 21.9 from our website and installed it onto your PC:

The updater in VCDS should accomplish the same thing but when in doubt, install a fresh copy.

2) Allow the installer to run through completely, agree to the terms, and unless you have some compelling reason to the contrary, allow it to install into its default location with the default installation options. At the end of the installer, it will prompt you to install USB drivers which you should let it do as well.

3) If your interface is plugged into a USB port, unplug it, leave it unplugged for 5 seconds then plug it back in. Depending on the version of Windows it may pop up with a USB Driver Installation Wizard or it may just automatically do its thing. If you encounter difficulties, try these instructions:
XP: http://www.ross-tech.com/vcds/usb/usb-config-xp.html
Vista/7: http://www.ross-tech.com/vag-com/usb/usb-config-vista.html

4) Start up VCDS (it may have already started at the end of the installation, which is fine). If VCDS won't start up at all after updating, make sure that Zone Alarm or your virus scanner are not blocking/quarantining the file. Make sure it says Release 21.9 at the top of the screen. If says an older version then something didn't go right. Check the shortcut on your desktop to make sure it's for Release 21.9. If needed, exit out of VCDS then repeat steps 1-3.

5) You should get a message saying something about "First Use, No Config File". You should acknowledge that message then go to Options and click Test. In order to fully test the interface, it needs to be connected to a car so that the interface has 12V of power. It doesn't matter if it's a VW/Audi, just something with an OBD-2 port with the key ON. If you test without a car it will be unable to check for a firmware update and will be unable to update.

6) If the Options>Test result shows everything OK but Firmware Update Required, click OK then Update. It should count up to 100%. When it's done click Close then Save.
7) At this point all of the buttons in VCDS should be available so you should try communicating with the car, for example by clicking on Select then 01-Engine then Fault Codes-02.

If you encounter difficulties, check FAQ 2.4 and 2.5

Specifically, check to make sure that Windows is not turning off the USB ports: go to Device Manager, Universal Serial Bus Controllers, USB Root Hub, Properties, Power Management, and uncheck "Allow Windows to turn off this device to save power". There are may be several entries with "Root Hub" so make sure to uncheck this on each of them like this: 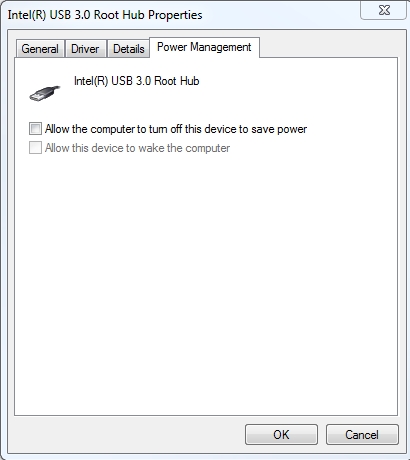 Make sure you have write permission where VCDS is installed (reinstall in the Documents folder if necessary), and remove any extension cable between the PC and the interface. Install and run the software while logged in as an Administrator if needed.

We have had some reports from users of VCDS running very slowly after some recent updates to Microsoft Security Essentials virus scanner. If verify that is the problem, you can add VCDS to the Exception list in Security Essentials. As of October, 2017 BitDefender may prevent VCDS.EXE from starting. Also in November, 2017 we received a report that an expired McAffee prevented the VCDS.EXE from running. Another customer reported Dell Mobile Connect Startup and Dell Mobile Connect Welcome and CCXProcess (which is part of the Adobe Acrobat Pro DC program) caused a problem where the VCDS Infterface Config could not display the interface information.

One customer reported success by completely removing VCDS then performing a registry scan and *.DLL cleanup followed by a reinstall. It shouldn't hurt to try this if you encounter difficulties.

One more thing: if you are using a Virtualized OS like Parallels, Virtual PC, remember those are NOT SUPPORTED as explained in FAQ 1.4

A customer emailed to report " the program now 'hangs' when trying to select a control module". After going back and forth a bit, he reinstalled 16.8 and says all is ok now. Just in case you have tried everything else, reinstalling shouldn't hurt. Also if you have another PC to use, try that, even if it's something only available on a temporary basis.

Edit: Another customer reported a problem using the Long Coding Helper and described this fix: "The application now works after setting the permissions to 'Share with - Everybody'. Windows 7 has a more elaborate permissions protocol than XP. I don't think I will ever understand it all. But since I am the only user setting permissions to 'Everybody' is not a big problem."
Last edited: Aug 17, 2017
Aug 18, 2016 #3

We have gotten reports from customers both in forum and email that Avast! virus scanner seems to not be playing nice with VCDS:

This page seems to show how to tell Avast to simmer down but I haven't tried it myself:

PetrolDave said:
I'm running Avast and not had any problems with 16.8.0 so it seems not everyone is having problems.
Click to expand...

As I've said in the other post "I have Avast Pro running all the time and it installs no problem I don't have to disable it."

Hi all! I now that this is not the right place to ask but i don't want to open a new thread for this kind of question. Is there a page where are described changes, improvements or bug correction for new application release (and why not for the previous releases)?
Jan 12, 2017 #9

MatrixG said:
Hi all! I now that this is not the right place to ask but i don't want to open a new thread for this kind of question. Is there a page where are described changes, improvements or bug correction for new application release (and why not for the previous releases)?
Click to expand...

Hasn't been updated with 17.1 info yet:
http://www.ross-tech.com/vcds/revisions.php

We received a report that some driver updating software (eg "driverscanner") can interfere with VCIConfig and prevent it from reading interface info to update a HEX-NET or a HEX-V2. Uninstalling fixes the problem. Apparently VCDS had no trouble.
May 29, 2018 #11
P

Hi I installed the new vcds version 18.2 on windows 10 pro, but it gives me problems of installing the micro-can, I understand that it does not install the driver.
It gives me error of usb interface not found.
I tried to install on another pc with windows xp and installed the driver correctly.
How can I solve the problem with the PC that has windows 10 pro?
Thanks for your help
May 29, 2018 #12

What happens if you run DPINST.EXE in your VCDS folder?

with the inserted cable it gives me error, without cable correctly install the drivers
May 29, 2018 #14
P

Plug in the cable. Find it in Device manager and post a screen-shot of its Properties sheet.

Double-click on 'Ross-Tech uCAN-h' and post what you see there.

Code 28 "The drivers for this device are not installed. (Code 28)"
Recommended Resolution

From Start, search for device manager and select Device Manager from the results.
Right-click the device in the list.
Select Uninstall from the menu that appears.
After the device is uninstalled, choose Action on the menu bar.
Select Scan for hardware changes to reinstall the driver.
Note You may be prompted to provide the path of the driver. If you are asked for the driver and you do not have it, you can try to download the latest driver from the hardware vendor’s website.

If that doesn't work, try some of this:
https://www.techcrises.com/how-to/fix-the-drivers-for-this-device-are-not-installed-code-28/

thanks but unfortunately I have not solved, the correct drivers where can I find them?
but DPInst.EXE should not install the drivers?
thank you
You must log in or register to reply here.
Share:
Share Link
Top