Hello,
I am working on a 2009 Jetta TDI. It originally came in with a 000135/P0087 Fuel pressure too low fault (among other faults). I surmised that the fuel metering valve (N290) was at fault and installed a new one. It is now setting a P0088 Fuel pressure too HIGH fault and intermittently gives an implausible fault though sadly I do not have any instances of this fault saved anywhere.

I believe that I must re-adapt the fuel pressure sensor so that it will accept the new fuel pressure values that result from the healthy N290 but I am having trouble going about this task.

Here is an auto scan:


Code:
Following the instructions in the Long adaptation balloon: 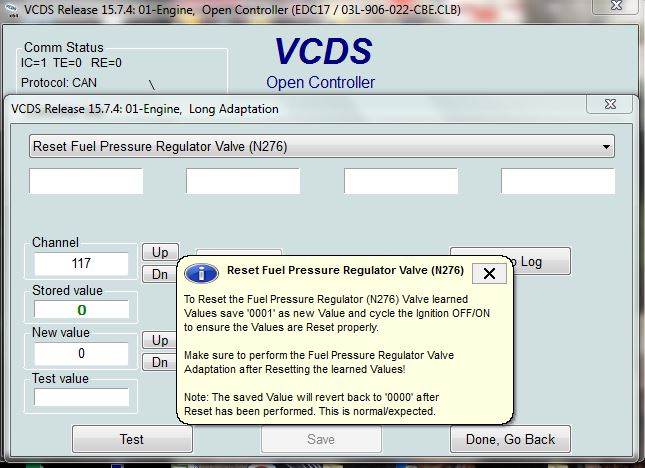 Nothing seems to happen when I enter the new test value, and the "save" button is grey: 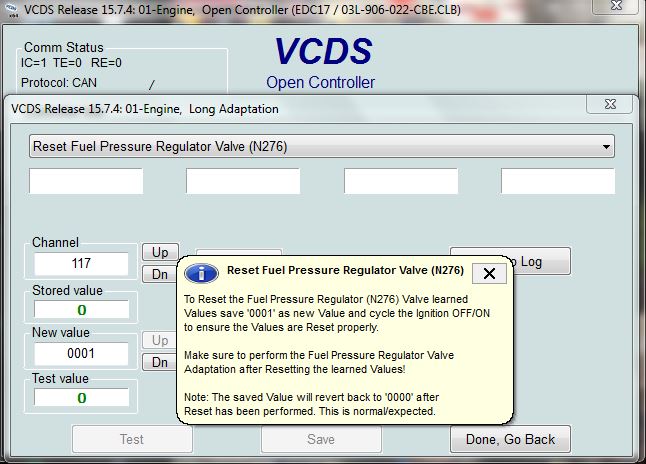 The pop up balloon instructions seem to me somewhat circular so I'd just like a little bit of clarification on the exact chronological steps required.
I have tried this using both sets of security access login numbers and I have tried to go into Group 117 in basic settings but I get an error message (again, neither set of security logins make any difference in this error message) 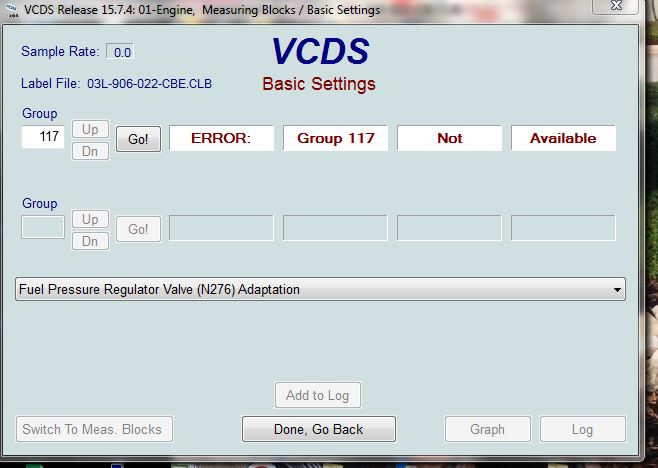 I'm probably going to put in a call to tech support but I thought I might go ahead and put this info up while they're at lunch so he/she can refer to it if necessary.

I did note this information in the wiki:

I have looked over the WD and it does not appear as though there are any common current carriers between any of the fuel system monitoring/control components the V157 which is clearly faulted out. So I ruled out the possiblilty that there is a wiring problem here on this end of things.
Last edited: Apr 22, 2016
Apr 22, 2016 #4

Hi Robbie, per our phone conversation I would try unplugging that IMRC to see if it runs any differently.

The RoW market V6 and larger engines support a reset after the latest dealer level flash updates are applied but a large majority of NAR engines do not support (or require) a diagnostic Adaptation reset. We are concerned about that used N290 though... I pinged Peter to make sure I wasn't having a brain fart and he confirmed those are only sold with the pump because they are calibrated to the pump.

Side note, this EDC is out of date at SWL 8681. Even though it isn't likely to resolve all of the issues SWL 9970 or newer should be flashed at some point.

Had a pleasant helpful call with Dana from Ross-tech but we were unable to reach any solid resolution. Evidently fuel pressure adaptation is not supported by this ECU or this particular software variety (she said a lot of stuff that shot right over my head).
In the end we went with a longshot super double secret "FMA" reset which involved entering 10008 into function 11 CodingII. This had the effect of shutting down and resetting some "fuel trim.." and other learned values in the ECU but it persistently faulted out P0088 fuel pressure to high while the second N290 was installed.
I went ahead put his original N290 back in and took it for a drive without incident.

The customer indicated that the instances of reduced power and flashing glow plug light were "very infrequent" I had to explain to him several times that the problem had nothing at all to do with the glow plugs even though he coincidentally had a faulted out plug/pressure sensor when he showed up this morning.

So it was fun but ultimately disappointing to not be able to offer a fix. I am still not sure why this problem (the low fuel pressure fault) is even happening. Like I said, underneath the N290 is nice and clean. 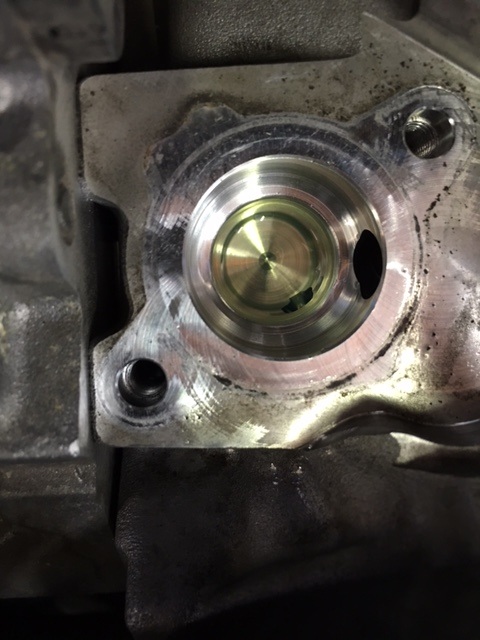 Here is some amazing information: I initially inspected the fuel filter (found no metal) and I asked him how long it had been in. He said it was brand new and in fact that the guy who installed it called him up while he was working on it to tell him that there was no filter installed previously. Customer told me he had put 100K miles on the car prior to this WITH NO FUEL FILTER INSTALLED. Amazing. I will not name the shop in San Antonio that last performed a fuel filter service on the car but I did see the service record which included a fuel filter change was perfomed 2 years ago.
Last edited: Apr 22, 2016
Apr 22, 2016 #6
R

Dana said:
Hi Robbie, per our phone conversation I would try unplugging that IMRC to see if it runs any differently.

The RoW market V6 and larger engines support a reset after the latest dealer level flash updates are applied but a large majority of NAR engines do not support (or require) a diagnostic Adaptation reset. We are concerned about that used N290 though... I pinged Peter to make sure I wasn't having a brain fart and he confirmed those are only sold with the pump because they are calibrated to the pump.

Side note, this EDC is out of date at SWL 8681. Even though it isn't likely to resolve all of the issues SWL 9970 or newer should be flashed at some point.

Thank Dana, I missed your reply before making my last post. Thank you for filling in the gaps there. I will advise the customer that he may want to pursue a dealer reflash. However I also advised him to await the potential buyback off and get out from underneath the car.
He pretty much jumped out of his skin when I told him how much it would cost to replace the torched DPF.

I am thankful that I have only seen this fault on this one car (once before a long time ago under the previous owner). As I said I had seen this car years ago with the same fault but the guy disappeared and this was long before there was an issue with the intake manifold.
Apr 27, 2016 #7
D

Could you elaborate on what the FMA reset does?

I have a car in the shop which may benefit from this reset.

All issues must be corrected before a full reset or adaptation can take place.
Recoding and full reboot are needed and not with the engine running.
Me and Eric did verify that sometimes this ecu will not allow an adaptation for specific tests such as this issue unless reflashed.
Apr 28, 2016 #9

Thanks for joining the forum. Per your email concerns:

Hi... Be sure to drive the vehicle after the FMA / Fuel Mean Value Adaptation is completed at least 50 to 60 miles, this is absolutely necessary to allow the ECM to learn the cleared adaptations.

Then recheck the fault codes and Readiness status.

~THAT IS EXCELLENT INFORMATION!~

Will pursue & report back.

After some hand wringing with the dealer (TSB 01-14-14 has expired), I was able to convince them to update the software version anyway.

Car is back in customer's possession. I'll report back as I have more information as to success of the software update.
You must log in or register to reply here.
Share:
Share Link
Top