DV52 said:
OK - more questions to the knowledgeable folk here to get the BCM on my test-bench to stop lying about the doors being locked (post #130 above);

First question (and it's a particularly fundamental question - the answer to which I hope does not impinge on any VCDS commercial secrets): Other than operating as the "Fat-controller", what other must-have data does the CAN Gateway provide for successful communications with the VCDS cable. More specifically, I'm trying to understand why when I plug-in the CAN high/low lines from the OBD port on my test-bench directly into the CAN pins on any other control module (with volts connected, of course) - I can't get my HEX-NET to talk. I'm thinking that perhaps the Hex19 module adds/subtracts data from the message header on the other modules - but I'm guessing.

Second Question: Assuming that direct CAN (wiring) connection is possible, what software switch settings should I use on VCDS to maximize the chance of success?

As usual, any response is welcomed - and thanks muchly in advance,

Some modules will communicate directly, without a gateway in between VCDS and the module, and others won't (or may be somewhat flaky). I do not think the Gateway adds or subtracts stuff from/to the message headers, but it can do stuff like bit-rate shifting (not all the modules and CAN buses in the car use the 500 kbps expected on the diagnostic CAN bus!) and buffering / message timing adjustments. The normal sequence VCDS uses is to ask the gateway to open a channel to a particular module. The Gateway then responds with something to the effect of, "OK, I'll do that for you, and you should use the following timing parameters". If that negotiation with the Gateway fails, VCDS will still try the module directly (necessary due to the very few models such as the B7 A4 that have some modules that only talk via CAN but have no proper gateway), however this approach may result in less than optimal timing being used, and may not work at all if the module is using a bit rate other than 500 kbps.

There's also an added consideration: Some modules won't power up (come out of sleep mode and accept a diagnostic session) without other modules being present and telling them, "hey, wake up and smell the coffee" first.

Great thread... I´m wondering (question for Jack and it also can be partly an answer for DV52) what about the terminating resistor(s) and the connection of them? Which resistors are the best and has the positioning of them in a circuit something to do/influence on topology of the units(which themselves had theirs own)? The break-out box(-es) has(-ve) also it´s own?
And about full BCM wake-up/coding change,etc. - when I see the faults in 17, isn´t the problem with coding change,etc. related with immo or CP? Or check the pinout again... (some other 31 or 30,...?)
May 29, 2019 #143

^^^ Fanda: many thanks for taking an interest in my problem and for making the time to put your thoughts in writing- very much appreciated!

As to your question about terminating resistors, great minds think alike (let's not contemplate the other side of this saying

). I asked this very same question way back on post #1 and based on the sage response of a very bright colleague, I proceeded without resistors with absolutely no adverse effects to date. I'm not sure if some (all?) modules on my test bench have internal impedance matching circuits on their CAN high/low pins - but I haven't observed any comms problems thus far from the absence of external resistors.

As to your other observation about IMMO/CP errors, yes these have been evident since day 1 - but again (for CP errors at least) the fact of their existence hasn't (and as I understand from Sebastian, doesn't) stop access to the modules that are captured within the CP "constellation"
Niether has (or, again from Sebastian's advice - does) CP errors stop my test bench from changing code-string values, or adaptation channel settings in the affected modules. 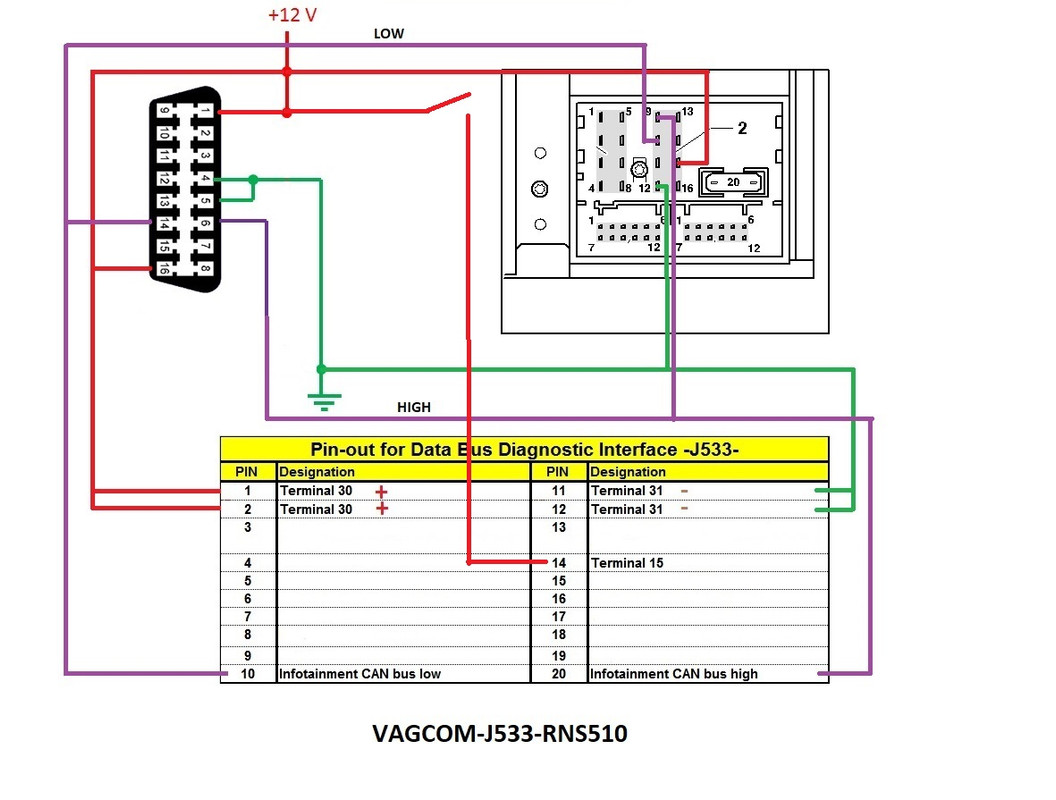 1975 Kombi said:
Is the above setup close?? I must be missing something
Click to expand...

Yes, you are. What's supposed to go to pins 6 and 14 on the diagnostic connector is the (dedicated) diagnostic CAN from the Gateway, not the Infotainment CAN itself.

Data should flow through the Gateway, not past it. 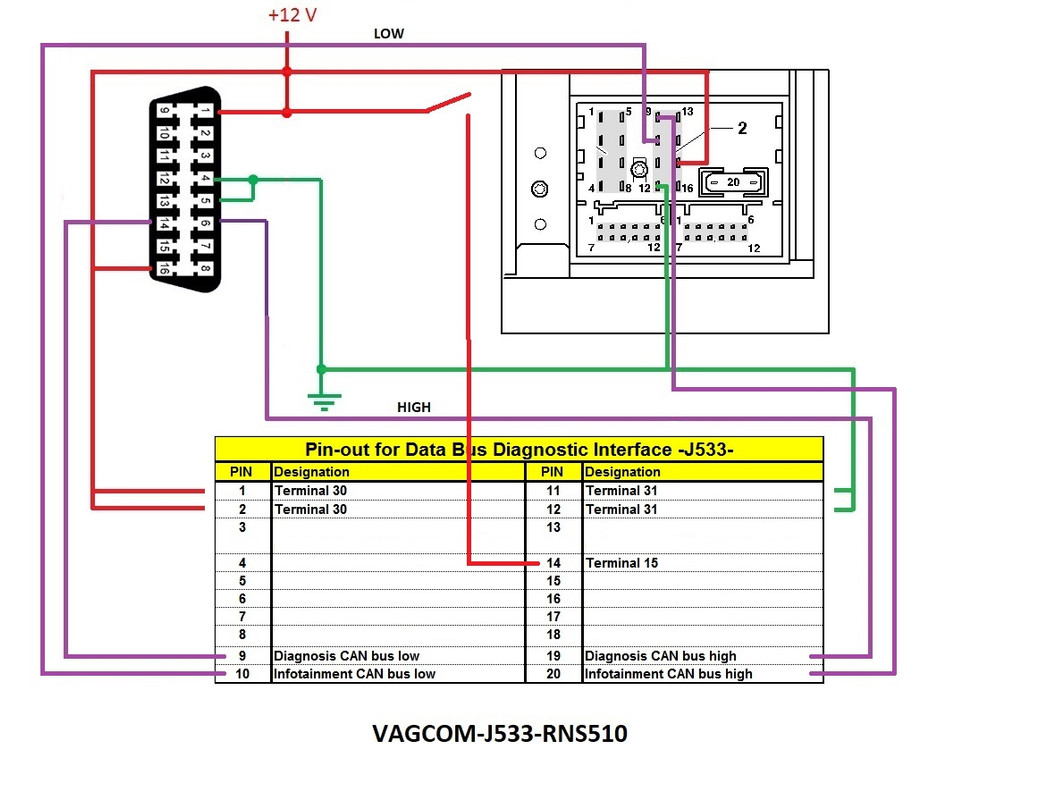 ^^ Brett: Your wiring diagram is progressing well (see my latest PM for further suggestions), but I thought that I would mention here publicly (because it might help others thinking about doing the same) that a vital part of my test bench was the wake-up signal that trigger module turn-on (from a software perspective, rather than the voltage turn-on signal that happens via the T15 point on your WD).

In the first incarnation of my test bench - I underestimated this aspect of the design. It's one of those logical things that all makes sense in hindsight, but it can be overlooked at the early stages of the build. Without intending any offense (and I apologize if you have already considered this of the design, but the wake-up facility ostensibly involves a simulation of the dynamic for the ignition key switch.

I'm not familiar with the RNS510, but I assume that stuff doesn't happen until the key is turned in the lock. Yes, some of the signal to wake-up the infotainment module may come from the resulting T15 voltage which happens at ignition switch-on/off, but if the later model Golf is any indication, there is also dialogue that happens over the CAN bus at ignition switch-on (in the case of the 1K chassis, I suspect it's the Comfort CAN bus).

On my Test Bench, the CAN dialogue to wake-up various modules necessitated installation of the steering wheel module @ address hex16 - because the ignition key barrel is directly connected to this module. I think from memory that RT folk found that they had to also simulate the ignition key on their test-bench - but I can't remember if they did this via the hex16 module.

Anyhow, might be worth looking at the WD to see if the same applies for the particular vehicle that has the RNS510

PS: the other thing that you might want to consider is the K line connection. From my scant understanding of the 1K chassis, I think that it uses this wire and it might not apply for just the 2 x modules that you are considering. But if you intend to increase the module count, it could be a confounded- perhaps
Jun 11, 2019 #148

1975 Kombi said:
Any better? lol I still must be missing something.
Click to expand...

1975 Kombi said:
Nope. It tries but does not connect to the gateway.
Click to expand...

Well, getting it to talk to the Gateway is step number 1. But I don't see anything obviously wrong with the wiring you now have between the diagnostic socket and the Gateway.

Is it safe to assume you have the switch for Terminal 15 closed?

Invested some 4-5hrs and made my own little testbench out of leftover factory wiring and connectors. Powered it by an old 500W ATX computer power supply. Its for setting up 3Q098065x Lane Assist cameras, MQB-style PDC modules and instrument clusters with the 32pin blue connector on the VW PQ platform. It has provisions to add stuff on Infotainment and Comfort CAN busses.

I wired it so when powered up, terminal 15 is always on. This shouldn't pose a problem with any said modules which take a direct terminal 15 input to work correctly? I only have a gateway at the moment to test with and it talked fine.
Last edited: Jun 15, 2019
Jun 15, 2019 #152

I wired it so when powered up, terminal 15 is always on. This shouldn't pose a problem with any said modules which take a direct terminal 15 input to work correctly? I only have a gateway at the moment to test with and it talked fine.
Click to expand...

Picture link doesn't work for me.

Most of our test-bench setups do not have a separately switchable Terminal 15 either; power them on, and both 30 and 15 are on. It usually only matters when modules do "house keeping" after terminal 15 turns off. For example, some older ECUs would only store changes to adaptation channels when that happened, and they obviously couldn't do that if Terminal 30 shut down at the same time.

Most of our test-bench setups do not have a separately switchable Terminal 15 either; power them on, and both 30 and 15 are on. It usually only matters when modules do "house keeping" after terminal 15 turns off. For example, some older ECUs would only store changes to adaptation channels when that happened, and they obviously couldn't do that if Terminal 30 shut down at the same time.

I corrected the link - (hopefully) it works now.

^^^ hmm......... picture is not available to me either - not sure if it's because stuff happens differently in the southern hemisphere (like water draining in a sink), but that's quite a long URL string in your post!!!

Google photos does not seem to be forum-friendly at all.


siLc said:
Most PQ modules have power/GND wire gauge specified as 0,5mm2 but some have larger 1,5 to 2,5mm2. An example is the Passat B6/B7/CC CCM module. With nothing attached, would this really need 2,5mm2 gauge wiring?
Click to expand...

I don't think so. The reason it has such large wiring in the car is that it powers lots of other stuff; lights and so on. If you just want to talk to it on the bench, you only need to power the module itself, not all the down-stream stuff that the module powers.

Most PQ modules have power/GND wire gauge specified as 0,5mm2 but some have larger 1,5 to 2,5mm2. An example is the Passat B6/B7/CC CCM module. With nothing attached, would this really need 2,5mm2 gauge wiring?
Click to expand...

Sebastian said:
2) CAN-High/Low for Powertrain, Infotainment, Comfort, Extended, Running Gear makes up for 10 pins - that leaves CAN-Diagnostics and CAN-Instruments which brings us up to 16 pins already.
Click to expand...

Please, explain what did I miss. Building similar box with DB25 right now.
You must log in or register to reply here.
Share:
Share Link
Top