Not all fuse failures are the same.

2011 Jetta, a lot of exterior lights not working, codes to match:


Code:
No wiring harness issues found. All fuses checked out good when back probed. But not all fuse failures are the same... the root cause was this: 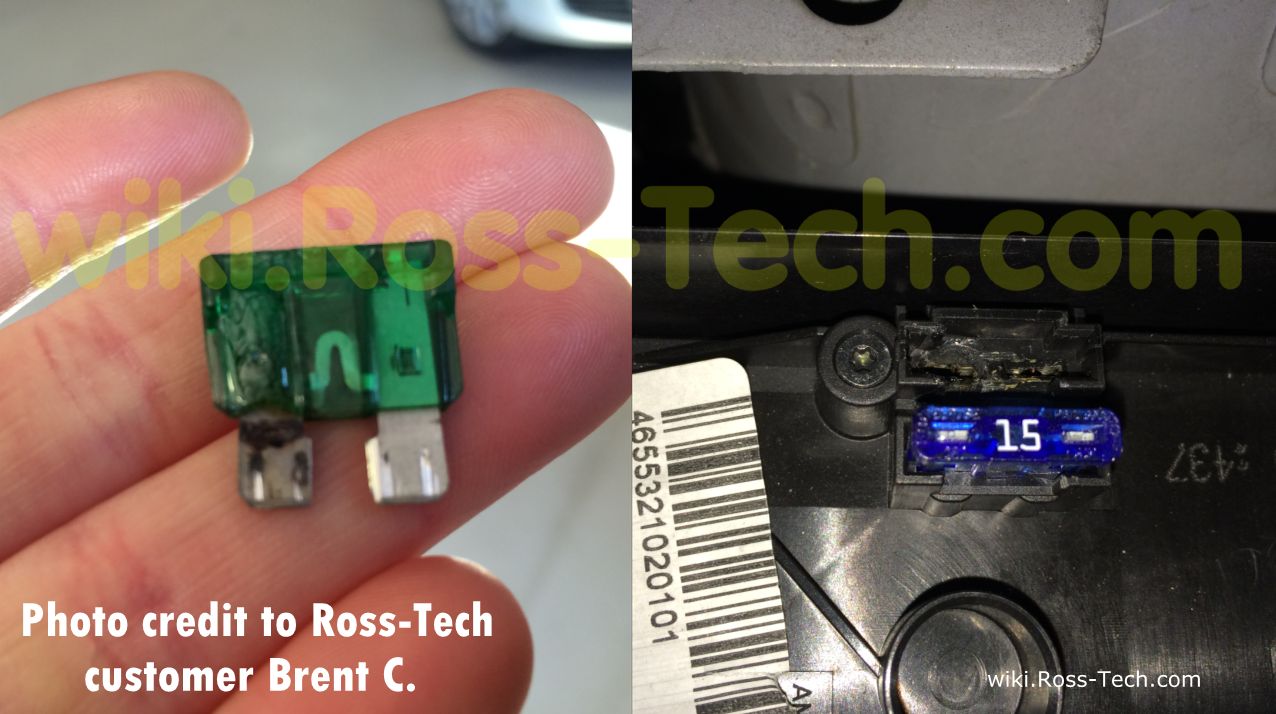 For testing purposes, another fuse was installed and with that, the exterior lights started to work again. Fuse box will be replaced.
Jan 29, 2016 #2

Jeff: Hi again - It's always easy (for me) to spot a circuit fault when someone has already identified the cause and I might be falling into this trap, but if you could indulge my hypothesis for the moment -please!

If I look at your picture ,the one on the LHS - I notice the heavy "colouring" on the left-side blade of the fuse (it's certainly doesn't look like the blade on the right-side of the fuse). Is this just a quirk of the picture, or does it suggest that the mating fuse socket on the fuse box was loose, thereby causing heat discolouration (even possible annealing?) on the blade?

This heating at the connection piont is caused by I^2*R losses - so the "I squared" part of the formula can be a major contributor to the amount of heat generated at the mating connection eventhough the "R" value may be small. Although in this case, the error message in the auto-scan report suggests that the fault had developed to such a degree that the "R" value at the connection point was large enough to cause an "open circuit"

So, the history of the fault probably would have been like this: initially, "R" value relatively low but nevertheless higher than what is deemed appropriate for a connection point, this combined with high Amps causing heat. Over time, the heat causing the mating surfaces to degrade - therefore making "R" value progressively increase with the age of the fault, eventually becoming so high as to result in an open circuit!

I can see the obvious deleterious state of the fuse holder in the RHS picture, but sometimes the level of heat degradation on the mating fuse socket (as shown in your right-side picture) isn't that obvious - particularly when the amp value of the fuse is small.

Hypothesis: If the fuse hasn't blown - a quick look at the fuse blades can sometimes diagnose these types of problems - I think

DV52 said:
Is this just a quirk of the picture, or does it suggest that the mating fuse socket on the fuse box was loose, thereby causing heat discolouration (even possible annealing?) on the blade?
Click to expand...

A poor mechanical connection is what I believe to be the root issue here. With that poor connection, as more and more amps are pulled through the circuit, the hotter it gets. After [weeks/months] of this, it gets to a point where the electrical path can no longer perform to factory design.


DV52 said:
the error message in the auto-scan report suggests that the fault had developed to such a degree that the "R" value at the connection point was large enough to cause an "open circuit"
Click to expand...

If contacts in the fuse box have been deform from the heat, then yes, that could happen. It could also be a massive voltage drop that was happening when under load. While we didn't test it, I would guess the wire that comes from that fuse to the J519 would show 12V with a DMM when under no load. But once there was a load on the circuit, the voltage dropped to the floor.
Mar 21, 2018 #4

Had this code on my 2003 Jetta Wagon.
1 Fault Found:
01276 - ABS Hydraulic Pump (V64)
012 - Electrical Fault in Circuit
Pulled ABS plug and checked voltages and one terminal at 12.7vdc and other 11.7vdc. Checked the fuses as per Jef the GURU and the one had 2 small (less than 1mm) carbon arc marks on it. Replaced the fuse and cleaned up the holder and problem fixed.
Auto-Scan, learn it, love it, live it... then check the fuses.