I'm trying to set the Readiness to ready without driving

After running Basic Settings "Automatic test sequence" [Go!] followed by holding the brake and gas pedals as prompted by the controller.
after several ECU resets and re running the test unsuccessful.


Eventually got an opportunity to take a short test drive seemed like the only way,
after test drive the Evap is Incomplete and that's another pain, need to initiate the evap test manually.

We have a scan from the OP but I can't post it here without his explicit permission. This thread explains the code tags Jack mentioned if Andy chooses to add it to this thread: How to post an Auto-Scan

Jack, we experienced something similar experimenting on Uwe's 2012 3.0L A6 (CGXB) with the engine controller basic setting selection "Automatic test sequence". Jef was the one testing but I believe all but 3 Readiness bits were passed when the engine controller claimed it Finished Successfully. So, I would need to try numerous drop-down menu Basic Setting operations in various orders live-time on one of those cars but .. it is entirely possible that the newest (UDS) engine controllers aren't truly capable of setting EOL readiness in a single Basic Setting Operation like the older CAN Protocol cars.

I suggested the OP try these at idle in reply via email this morning:

I have always found that visiting each test individually was the best way for EOLE or Force of Readiness tests.

Now this car being UDS, and Simos must be done from the drop down menus.

It would be interesting to see if running a test in a certain order creates a bug loop in the software.......seen that one before and with no DTC.

My first question would be........... is this car tuned, and is maybe readiness being blocked from a test mode due to FOD?

Not exactly the same animal, but I was able to *MOSTLY* set readiness in my 2015 GTI which uses UDS by getting it nice and warm, BS for "Automatic Test Sequence" and flooring the gas and brake. It varied engine speed on its own including a scary brief trip up to 4500 rpm and finally got everything passed except EVAP. Even after topping up the fuel tank (it was kinda low) and running the test again, EVAP never tested. Shrug. It was handy to pull up this Advanced Measuring Value to watch the steps count down from I think 18? to zero: "Test steps still to be performed"
Oct 19, 2015 #6

LDP tests are sometimes aborted after being warm depending on firmware.
Early cars even sited a specific IAT or you abort.......

I don't think the term "force" is a good one. To me, it seems more like a request, as in: 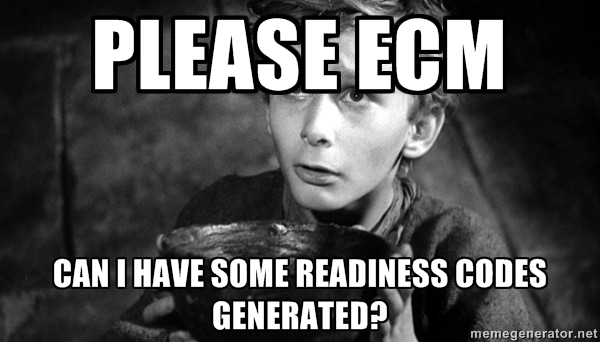 Agreed........ not such a good term, however, is the term used in the repair manual since 1995>
You must log in or register to reply here.
Share:
Share Link
Top