Sad day for me today ,my 2nd GSD died

Had two german sheperds brothers , which i've rescued from the street back in May 2013 , i think they were couple months old , cared for them , treat them good. One of them died last year and the second just died a few hours ago after a short few hours of labored breathing which started around 1400 , or at least that's when i observed it. He ate good last night, had plenty of water..he was barking like a nut and jumped around in the morning when i fed him..I didn't even have the chance to take him to a vet for a better check up ( had a local vet come by the house around 1930 when i really got worried about his labored breathing which i thought it was because of the weather ) and have a rapid check, dog had a bit of fever but not that bad , got a shot of vitamins and antibiotics ) and i was suppose to take him to the clinic early in the morning. Died in my arms 4 hours later...it really took the breath out of me , same the other one , died in my arms too . They were both friendly and playful...and they were part of the family for all those years . RIP my doggies , papa loved you much !

Sorin, sorry for your loss. Our pets are every bit a part of our family and our life as any other member. Keep the memories close. Your doggies are forever with you. Condolences.
Aug 12, 2022 #3

thanks guys...it's been tough to heal from the first one..now the second one..uffghh...i hope il'll get better cause i can t get it out of my head

, my baby girl was very attached to this one and she 's wondering where is her doggy and i keep looping some stupid shit like "it jumped the fence and maybe he'll come back later" , she thinks he got scared from the shots and he ran away......
Aug 12, 2022 #7
H

I lost my dog at the end of last year and still haven't got over it but I thought it was important to be honest with the grandchildren what happens, so that they could understand and accept it.
You have my sympathy
Regards HMC
Aug 12, 2022 #8
D

My sister lost her dog last year, she got another dog about three months later, she said it really helped with the grieving. My dog passed away in April, my wife and I are currently looking for a pup.
Aug 12, 2022 #9

I still have 3 dogs ( 2 stray dogs, no pedigree ) and a smaller Deutsche Kleispitze...Thing with these dogs is that the strays never got sick once since i "ve had them for the last 10 yrs but the 2 gsd were prone to all kinds of problems ( all adopted and rescued from street , less the Kleinspitze which i ve "rescued " from a family that lived in a small apartment and had no time and energy to keep up at the time with a energizer bunny 3 -4 months old Kleispitze.). Not to say that i didn t love them gsds intensely but i will not get any more dogs for now....the upkeep with gsds is intense and you have to be very careful with them ( vet , food , exercise ).
I will try to break the news for my girl one of these days , when the other died she was present and she kept crying for days. I think she redirected much love to the other one..and so it s difficult to tell her now that he died too. Perhaps in a few days...or maybe she ll be better with the notion that he ran away....The dog died almost at midnight while she was asleep and i buried it in my backyard first thing in the morn ' , so she didn t get to witness again a dying dog and a burial. It s still tough to lie to her about this problem and i feel like a jackass
Aug 12, 2022 #10

JMR said:
Thing with these dogs is that the strays never got sick once since i "ve had them for the last 10 yrs but the 2 gsd were prone to all kinds of problems
Click to expand...

I suppose you're aware that some of the purebred breeds have health problems due certain breeding practices, and I think there is something to be said for "hybrid vigor" that mixed-breed dogs have. And of course, the bigger the dog, the shorter their expected lifespan.


JMR said:
when the other died she was present and she kept crying for days.
Click to expand...

How old is she? If I were to speculate, the GSDs were very protective of her, in a way that the other dogs were not?

Yep , the gsds were very sensitive with their food and health. I also had a special problem with ticks , even though i spent considerable amounts of money each year to keep them protected they will still get bitten and couple times they got babesiosis ( thick disease ). I think that the treatment for this disease ( which is actually a poison injected into their blood ) damaged some of their internal organs and their life expectancy decreased ..first died at around 8 yrs and this 2nd one at around 9 yrs . They should ve last a bit longer from what the chart says ( 10-13 yrs ). But..they had good yrs , free in a big backyard , good food and plenty of love.
My baby girl was 4 yrs at the time and i just brought the dog from the clinic , got him out of the car , took him to his space , my daughter and boy were petting him and were happy to see him and then the dog just gasped a few times and fell dead. It was a really fast death and the event was horrible as i was right there with my wife , baby girl and baby boy. Uuughf...that was a bad day man.
Now she s 5...and i cant bring myself to tell her..no way..
Aug 13, 2022 #12

also, did you guys know that when a dog is about to die the other dogs around him will not bark him, try to attack him ? The 2 gsds and my 2 stray dogs didn't get along at all , so it was always a danger if all of them got loose in the back yard. They will try to kill each other and many times i could barely pry them from each other ( water , you throw water on them and they will let go of each other ).. So , as my 2nd dying gsd roamed the backyard aimless with me behind him for about 20 minutes before he died , he came within few feet of the strays, BUT they didn't bark him, they kinda just laid down on their bellies and kept still watching him with their muzzles on their front feet . Even though they were fierce haters against each other, after the gsd died, i let them come to him...they just muzzled it him few times , they sat on their behind for few minutes and then left with their tails between ther legs. I never thought that they will do that. When the first one died, his brother came and tried to push him with the nose and paw for like what it seemed forever , then it let out a sharp "cry" and sat next to me the whole time i dug a hole in my back yard. As i said, that was a really bad day .
Aug 13, 2022 #13

The biggest problem with the pets that we love is that their lives are too short. But their passing is something we have to learn to accept in exchange for the blessing of the time we get to spend with them.

Linda and I have had three dogs that have passed. I'm not ashamed to admit that I cried some each time.

These are the current two, Daisy and Hazel. 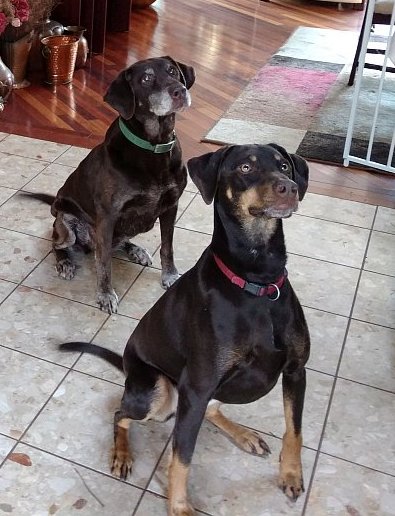 Daisy, the chocolate lab is now 14 years old, which is several years older than the age any of our previous dogs made it to. Not sure how much longer she has...

Four years ago, when Hazel was a pup:

Nice dogs. I hope they will live a long time and bring you much joy. They are house trained i see, my gsds got once inside the house and they nearly wrecked it...

. They were not trained as a gsd should , they knew few commands only nut they were happy anyway. I kept mine outside , only the little Kleinspitze gets to stay inside the house... Yes , there is crying , you can't help it. Mostly i felt really bad because i couldn't help them more... Sometimes they got me mad digging gigantic holes in the yard ..i've yelled , cussed at them... but mostly i've had a good time and we played with them. I will try to muster the courage to tell my girl about it...i hope she'll be alright, she'll probably cry and that just breaks my heart. I'll have a talk with my wife and see if she agrees to it.

Uwe said:
If I were to speculate, the GSDs were very protective of her, in a way that the other dogs were not?
Click to expand...

Yes, i would let both my kids around them and trust them just by feeling, however , it took me a long time to let my kids near the strays though they will right away drop to their bellies and just sit still an quiet and let themselves be petted by the kids . Is just that as soon as the kids turned their back they will spring in a frenzy around them...so that got as scared few times because we taught that they will bite or otherwise knock the kids to the ground playing. The gsds didn't have that " playful violent" reaction, they'd be just waiting to be petted...and then went about their day. My daughter and my mom have a special thing together , they go every morning after feeding time and give treats to each dog...My boy..eghgh....he's not that into it ..but then again he's only 3
Aug 14, 2022 #15

@JMR, this has been weighing heavy on me all day, losing my fur babies kills me every time but I keep going for the next one. You must explain to your daughter how life is (I have no children only cats so for me it is easy) we all live and die and no matter how you shield her, she will find this out… forewarned is forearmed. The best any of us can hope for is to outlive our parents which is natures best outcome, there was a scene in Lord of the Rings which floored me unexpectedly, along the lines of no parent should have to bury their child and not having children I was shocked how that one line hit me but with animals we cannot expect that.
Aug 15, 2022 #16

Done ! Went a bit better than expected, i suspect that she somehow knew...i think she over heard me and the vet talking whether the dog will live or die until next morning for a follow up. Thanks much for your emotional support !
Aug 28, 2022 #17
T

Sorry for your loss. They are family after all. Have always had German Shepards and not one has lived beyond 8 years.
Aug 28, 2022 #18

tonyb842 said:
Sorry for your loss. They are family after all. Have always had German Shepards and not one has lived beyond 8 years.
Click to expand...