JMR said:
I don t know..supposedly they had some international oversight..foreign observers. I don t think they kept a gun to everyone s head. And ..i think it a better for those people to be under a russian protection rather than being slaughtered for years by Ukrainean army..
Click to expand...

I wonder if when left an unchecked, the Russian army rolled into your country, would they not rape and murder Romanian women like they have the girls, daughters, girlfriends, wife's, mothers and grandmothers of people who are supposed to be family? Why do you think they would not rape and pillage their way through Romania onto the next country?
Oct 5, 2022 #762

Well , it s a different concept here. Their "special op " has taken place with a country they were in conflict for a time... Then Ukraine is neither Nato backed ( so they say ) neither part of EU . I don t think Russia will take a swipe at Romania ( no reason to , no conflicts , no bad blood ) . They won t make a move on any EU country. Is it possible they will try ? Everything is possible , anyone can attack anyone..but there must be a reason they say. And they had a good reason with Ukraine. I will not reiterate again the reasons . So...as far as rape and murder and pillage...UK itself has some stains on it s grandeur and fame. But that s neither here or there now...What i wanna highlight is that war is bad and where there is no law , bad shit happens ,people lose their humanity sometimes. The West is known for it too in diverse conflicts around the world since 200 yrs ago until today . War is good for the west ..war is very profitable. They sell arms to both sides , they get to pillage /blackmail/ suck everything out of any country involved in a conflict under the guise of reconstruction , support , etc etc .
You see..i don t think that the world as we know it will last another 50 years without a major conflict . We as people became such assholes , we think we are entitled to everything , we think we are gods , we think we can rule over another country , we think we are the supreme beings here . I think we are just little shits "living " for a while and then be gone like we never ever existed. So , given these reasons...i am happy that i am a Gen X er and to quote a saying " a generation so complex and scary they named it the X generation ". Everything after that it s just ..i don t know .. i dont think they will last too long once the X ers are gone.
Last edited: Oct 5, 2022
Oct 5, 2022 #763

On many subjects we agree but on this one I can’t get my mind around your stance, you go against the grain of every sane person I know so either we are all mad or you are…
Oct 5, 2022 #764

Arrgghh....that put a smile on my face

. You have that dark british humour

As long as men have a pair of Testosterone producing testicles dangling between their legs, there will always be wars. The world has I think known 1 day in the last few hundred years where there wasn't a war somewhere on the planet. Once you get rid of one murderous dictator a new one will spring up UNLESS you have a robust democratic system which prevents this, the UK is a fine example. The only problem is, yes our system stops dictators but it only allows weak useless knob heads to get into power. As soon as we get a strong one, his girlfriend comes along, puts his balls in a jar and only lets them out when she says so, mind you that lost him his job, for now... until he dumps her for the next floozy.
Oct 6, 2022 #766

Crasher said:
As long as men have a pair of Testosterone producing testicles dangling between their legs, there will always be wars. The world has I think known 1 day in the last few hundred years where there wasn't a war somewhere on the planet. Once you get rid of one murderous dictator a new one will spring up UNLESS you have a robust democratic system which prevents this, the UK is a fine example. The only problem is, yes our system stops dictators but it only allows weak useless knob heads to get into power. As soon as we get a strong one, his girlfriend comes along, puts his balls in a jar and only lets them out when she says so, mind you that lost him his job, for now... until he dumps her for the next floozy.
Click to expand...

you still didn t answer my question though

. I feel like i am listening to the White House's mouthpiece

, the lovely miss JeanPierre something or other. She can't hold a candle to Psaki though...she give nearly the best answers runaround ever . I used to really dislike B. Johnson, his disheveled look ( he looked like he was on crack or mushrooms all the time ) ,speech and attitude , but Truss is just a snake ..why are you people always choose the biggest liar always ?

JMR said:
I just want to know if we agree on the 50 years timeline though ?
Click to expand...

here s another nut thinking along ...about Russia and Ukraine...bet ya he's a mad person too but he does have some good points

As Nuclear War Looms: Does Russia Have a Right to its Own Monroe Doctrine?

It could be 50 years or 50 minutes, who knows if your murderous gangster war criminal friend Putin is in control, he needs a couple of 9mm hollow point rounds putting in his belly so he dies slowly in agony.
Oct 7, 2022 #769

Crasher said:
It could be 50 years or 50 minutes, who knows if your murderous gangster war criminal friend Putin is in control, he needs a couple of 9mm hollow point rounds putting in his belly so he dies slowly in agony.
Click to expand...

Well..he s not my friend per se ... come.on man..if you re gonna kill him aim for the head 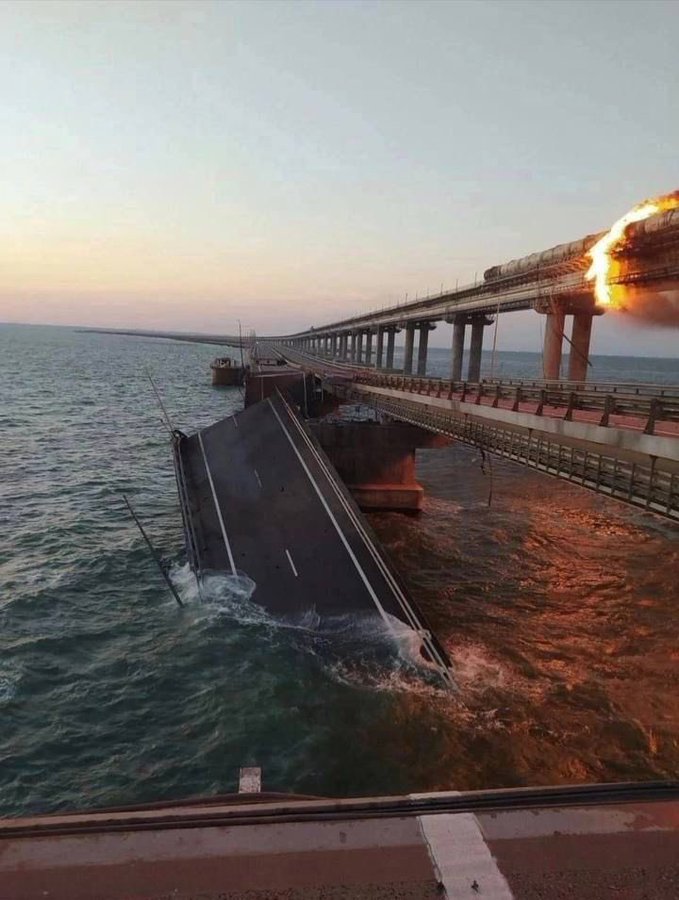 It's been reported on UK TV as "a train catching fire" which you can see burning on the upper level in that picture but ... that doesn't explain why the road deck on the lower level has fallen into the water while the upper deck is still intact?

I wonder how many Russian soldiers are now cutoff with no supply or escape route? If they tried it by boat it would be a blood bath. Personally I see having so much personal so perilously placed is negligent leadership
Oct 8, 2022 #773

PetrolDave said:
Me thinks the cause was NOT a train fire........
Click to expand...

Current reporting indicates it was a truck bomb that initiated it. 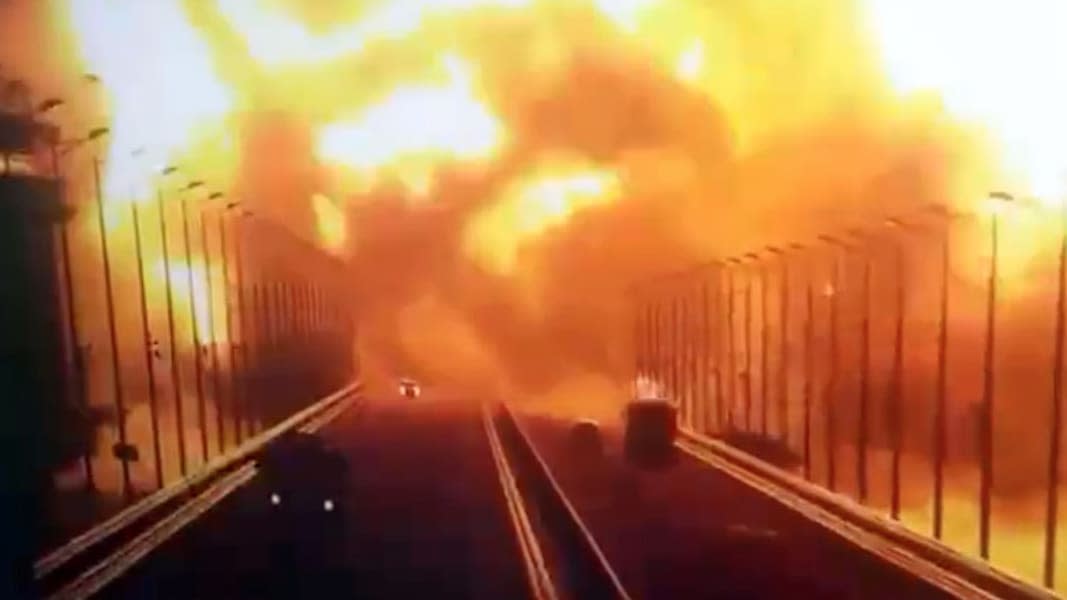 Anadolu AgencyA huge explosion has destroyed part of a key road and rail bridge linking Russia and the Crimean Peninsula, killing three people.Russia’s National Anti-Terrorism Committee said that a truck bomb on the bridge over the Kerch Strait, resulted in seven railway cars catching fire and a...

"the good news, we can fix the bridge... 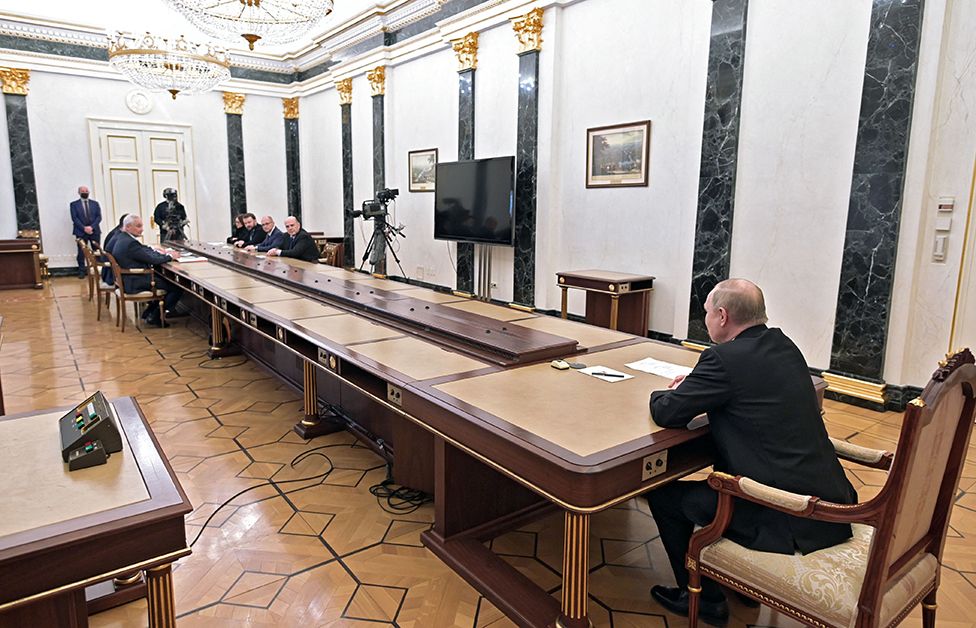 The bridge was an interesting and very psychological strike on Russia. It showed them nothing in occupied Ukraine was safe. Russia propaganda about it being a terrorist attack is total BS. They the Ukraine are the country being invaded and they are fighting back as they have every right to do, they have not even tried to attack Russia in response, as the US / NATO will not allow it for fear of "escalation". Just as the US did not fly over the river on the border of North Korea and China in pursuit of Chinese jets attacking them during the Korean war.

But Putin's next strike will possibly be a nuclear EMP bomb (a nuclear bomb that sends out a strong electro magnetic pulse but little physical blast to destroy electrical and telecommunications infrastructure). Conventional missile strikes against the electrical system appear to not be working for the Russians so this is the next step and one that Putin may think he can get away with unfortunately.

I d say let s stop for now with the nuclear weapons and emp s and sci fi movies. Russia is not Taliban man..they are still a country with laws and rules of engagement . It it still a highly functional govt and it seems to be pretty restrained in using weapons of mass destruction . They would wipe Ukraine clean in 24 hours or less if that was the desire. It is not. So let s stop the nuclear warmongering for now. I don t feel bad for Russia because the bridge was destroyed or the NordStream pipe was blown. That is action - reaction , whatever.. It is all in the favor of US as it seems , the EU parliament has no balls anymore and EU has become insignificant . Even in the EU parliament sessions reasons are given by different europarlaentaries for a wake up of Europe but it falls on deaf ears. Hence , we can safely assume that all politicians in decision power seats are either deaf or real idiots or they don t care about the few ones that maybe are in their right mind , they are just taking orders.. Ukraine didn t matter for shit to EU until US decided to make Ukraine an outpost of democracy. Germany , the locomotive of Europe is now in a sad economic distress...and for what ?? For what i ask ? For Ukrainean democracy ? You have gotta be shittin me !!! Now we re all in it ( shit ) with or whithout desire and if someone is blind to see it then i feel sorry for that person. The word of today is " global economic destabilization " so the persons interested can aquire more wealth , more power , more influence . Wpuld an admin take my text out of reply mode please ? I was on my phone and i pressed something by mistake maybe ...
Last edited by a moderator: Oct 11, 2022
You must log in or register to reply here.
Share:
Share Link
Top