Is there a readily available method to determine which LIN bus version a given alternator regulator uses, or needs to use?

The reason I ask- a Bosch alternator from my 2009 Audi A5 was rebuilt and afterwards it worked fine, but only for short while ( few minutes) whereupon charge voltage drops to nominal battery voltage despite battery clearly needing more charge. The alternator has been turned off so to speak.

Reading around I find that LIN bus type is important, and on the car itself I find that the replacement regulator is not the same brand let alone part number as the old one I luckily photographed before it was sent away for repair. Photos of the alternator cover part number and the regulator itself are below: I am due a new VAG supplied genuine regulator early next week, and will of course report back the results in due course, but I thought perhaps someone could save a little skin from my knuckles in the future with a method to discern which LIN bus version a particular car is using, and therefore minimise the need to get the old regulator off ( it is an absolute ****** to get off on this car ) if it is the correct one ( which appears to be possible to find from online datasheets in some cases at least, but of course not Bosch that I can find )

Here is a recent fault scan to give car details- ignore module 19 fault as this was caused by an incorrectly coded replacement battery which was since sorted. The fault which eventually came up and pointed to the incorrect regulator being used was also under module 19 but was related to 'intermittent communication' but the scan eludes me at this time. I will get hold of it from another computer and share.

And here is the remaining fault in module 19, which I hope will disappear with the correct regulator:

I'm having a hard time with the term "LIN Bus Version". LIN bus hardware is pretty well standardized. Of course the protocol/messages being exchanged might vary, but I doubt that an incompatibility here would produce a "No Signal/Communication - Intermittent" fault. Have you checked what's going on with that LIN bus using an oscilloscope?

Uwe said:
I'm having a hard time with the term "LIN Bus Version". LIN bus hardware is pretty well standardized. Of course the protocol/messages being exchanged might vary, but I doubt that an incompatibility here would produce a "No Signal/Communication - Intermittent" fault. Have you checked what's going on with that LIN bus using an oscilloscope?

Hi Uwe- yes I have to admit I am slightly clutching at straws with my hypothesis because, and answer to your question, I have not scoped the signal. I don't have a scope tool and to be honest, even if I did I do not know what I would expect to see. At present I can only replace the regulator and see what happens- if it does not improve the issue, I will of course revert to examine basic connectivity issues given there are no other coms errors.

To give some more background, the issue/fault came about in a strange sequence. The alternator can be seen to work for a while as I mentioned before, as judged looking at MBV 018, 019, 020 of CAN gateway 19. The voltage it is outputting ( around 14 or so volts ) then drops to battery voltage of just over 12V and the current flow value then turns negative to the tune of about -10 Amps. At this point when I went back into module 19 there was no error code so I thought ok, perhaps the ECU intentionally told the alternator to stop charging. But then, when I stopped the car, turn ignition off for 20 / 30 seconds, turned it back on but did not start the car, logged into module 19 I had the single remaining error code.

To be honest I got lost with the number of times I tried different combinations of on/off, run/not run.

I am quite pleased to have got the original faults down to just this one. Before I had the alternator rebuilt and replaced the original OEM battery the faults were:


Code:
I had the alternator rebuilt because there was no charging output as judged with a multimeter. With such high mileage I assumed brushes were worn out or a rectifier problem so simply removed it and said "rebuild please". It is of course possible I have had the alternator built for no useful purposes and there was another issue before all this, and that remains.... but I do not have all the same codes as before, but instead this new one. The only thing different now that before which would affect communication is the regulator.

This is why I am wondering if for example my car is using one LIN version and the recently purchased regulator used by the alternator repair company was effectively too new. I can determine from the replacement Mobiletron VRB4197 part datasheet that it appears to be LIN 1.3 but this does not help unless I know what the car is using, or at least that was my logic for asking the question.

I have found and read SSP_395 Audi A5 networking but it does not give LIN bus version details. The most useful thing it says on page 27 is below, which admittedly I have not checked in VCDS to see if I can get:


"Diagnostics
As the data bus diagnostic interface J533 is the master control unit for the alternator as a LIN bus user, the
address word "19" must be selected for alternator diagnostics using the VAS tester. The data blocks contain
information on the status of the alternator.

In the event of sporadic alternator faults, data is available in the following format in set 13 of the history data
on the data bus diagnostic interface J533:

M = continuously negative energy balances
This means: the battery becomes discharged, as more electrical current is consumed than is supplied by the alternator

Any thoughts/comments appreciated. By Tuesday I will have installed the new Audi supplied regulator so we will know if there is anything left to do, but it annoys me I cannot get to the bottom of this by means other than part replacement. On the plus side, at least I avoided a completely new alternator, so far £££££
Sunday at 5:17 AM #5
A

I should say I also took inspiration from this thread: https://forums.ross-tech.com/index.php?threads/13952/
Sunday at 6:51 AM #6

andythechief said:
The alternator can be seen to work for a while as I mentioned before, as judged looking at MBV 018, 019, 020 of CAN gateway 19. The voltage it is outputting ( around 14 or so volts ) then drops to battery voltage of just over 12V and the current flow value then turns negative to the tune of about -10 Amps.
Click to expand...

The alternator taking current OUT of the battery is never right, especially as much as 10 Amps.

Since you don't have a 'scope maybe it's worth doing a simple continuity check on the LIN connection between the alternator and J533?
Sunday at 7:02 AM #7

PetrolDave said:
The alternator taking current OUT of the battery is never right, especially as much as 10 Amps.
Click to expand...

That’s not current flow through the alternator, it’s net current at the battery negative terminal; where the BDM is. 10A is a pretty nominal current when ignition on or engine running and battery not charging. Hence the battery voltage dropping to normal cell values.
Sunday at 7:56 AM #8
A

PetrolDave said:
The alternator taking current OUT of the battery is never right, especially as much as 10 Amps.

Since you don't have a 'scope maybe it's worth doing a simple continuity check on the LIN connection between the alternator and J533?
Click to expand...

Sorry I wasn’t specific- as mentioned by another above I was quoting the negative current value quoted by MBV 018. I didn’t know but I’m glad this at least is typical value.

yes I will revert to testing wires but the circuit diagram of the LIN network may take some unpicking as it seems there are various branches and links to other slave devices.

I’m pinning my non-evidence based hope on the new regulator at the moment.
Sunday at 3:26 PM #9

Files is placed in C:\Ross-Tech\VCDS\Logs
Open the 3 text files and copy and paste it here
Monday at 2:33 AM #10

Cheap and incorrect Voltage Regulators almost never work correcty on these cars.
Main issues are incorrect charging and/or fault code indicating no communication to alternator although charging is OK.
Monday at 7:51 AM #11
A

Thanks. I’ll collect the diagnostic info mentioned as soon as wiring is reconnected.

Partlink24 part number on an after market supplier WAI Global website shows a protocol, ID number and COM speed. I assume if any of these are wrong there will be communication problems.

The part number was useful thanks. A Bosch unit is very cheap- £25 from AUTODOC so I’m surprised an even cheaper one was used. Let’s see what Audi supply.

Files is placed in C:\Ross-Tech\VCDS\Logs
Open the 3 text files and copy and paste it here
Click to expand...

The car is now fixed- the new Audi supplied regulator did the trick so I can only assume it was a communication issue of some description which was causing the error. Of course a long term test will be the final judge.

For completeness should someone else get the same/similar issues, here are the contents of two text files created by following the above instructions. I'm not able to annote or highlight what this all means, perhaps you can comment @NEtech ? The third file output was a CSV spreadsheet file so not pasted here.


As always- VCDS never fails to add value. Many, many thanks one and all.

Here is History data for Alternator: 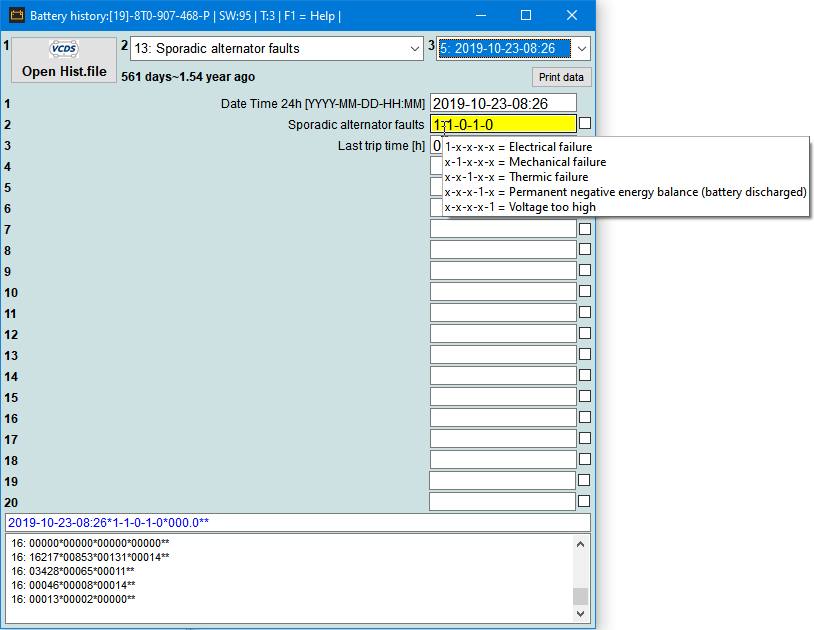