It pains me to announce that one of our most prolific and valued members has passed away today.

@Jack@European_Parts has succumbed to complications of COVID on this 11th day of April, 2021.

I have known Jack since before Ross-Tech existed. He was always character. Some people did not care for his methods, which largely involved trying to teach people to fish rather than handing out fish, but the reality is, he was always trying to help everyone in his own unique way.

Jack will be missed here.

Mike Dotson
25th Dec 2019 @Google
★★★★★
After being misdiagnosed by both an independent repair shop and an Audi dealer, i came across Jack in the Ross-tech forums. Jack without any prompting called me when u only expected a generic email. Over the course of a month jack reached out to check on the status of my repair. He walked me through wiring diagrams and have suggestions for what to check next. I am happy to report my car is running again without the need of a new ECU, just a new signal wire. Thank you Jack!


Automotion Reno
30th Jan 2019 @Google
★★★★★
If you need real credible help with Audi & Vw electronics look no further, Jack possesses an exhaustive (and I mean exhaustive !) understanding of these things to the point where dealerships and even the manufacturer refers problem cars to him. I could not more highly recommend someone in terms of knowledgeability & competence, but also I am personally so grateful to him for going way above & beyond to help us on several occasions recently. I consider this man is an ally & an asset to professionals in our line of work !

R.I.P. Jack. You made an impact on the world that will outlive you and you certainly were never afraid to speak your mind. Coronavirus was the ultimate F.O.D.

When helping customers, I tell them about the forum and "warn" them about Jack. Many people got a laugh from the warning and looked forward to see how much of a character Jack could be. He was great help many folks here... and the source of 2 phone calls demanding he be fired.

We may have only met once, and while your methods may have been difficult for some people, I always knew that you would stick to your guns and principals. You were a good person who said what he felt needed to be said. You helped others even at times when it wound up being to your detriment.

I never had the pleasure of meeting him in person, but of course I spoke with him many many many times on this forum, and years before that on the Whoretex (I feel I should keep a few Jack-isms going

), and a couple times on the phone.

Back before I stopped worrying and learned to love my CEL, he helped me make progress on troubleshooting my Phaeton W12. I had reached a point where I was ready to park it in a bad part of town and set it on fire, and he talked me down. He said something to me, over the phone, that resonated with me and I remember to this day: "You can figure it out. It's just a machine."

I don't know why that broke me out of my loop, but it did. It worked on the part of my brain that had decided I was defeated, that it was an intractable frustrating unsolvable mystery of the universe, and moved it back into the domain of things that could be analyzed, tested, potentially solved. I don't know how to explain it better than that. I have worked on other problems years later, things entirely unrelated to automobile engines at all, and sometimes heard that voice again: "You can figure it out. It's just a machine."

From what little I knew of him, again not having met him in person, I don't think Jack had customers in the traditional sense of the word. I think Jack decided whether he wanted to count you as a friend, and if so, he was a great friend who would offer solid advice, and also sometimes he would exchange fiat currency for goods and services in a ratio he deemed fair at the moment. If you were not Jack's friend, he would not be doing business with you, and that was the end of it.

It's the eternal bane of Internet forums that tone of voice, that intent, that emotion sometimes does not translate well to the written word. That was often the case with Jack, who had his own unique style of writing. I don't know how there could be such a difference between Jack the online persona, who wrote automotive advice in the style of Time Cube guy, and Jack the warm and personable fountain of knowledge I spoke to on the phone, but there was.

I'm sad that not everyone managed to read between the lines enough to learn from him, but glad that so very many did. I'm glad that Jack was a friend to me, and that I had the opportunity to learn from him. I'm truly, deeply saddened to hear of his passing.
Apr 11, 2021 #10

I'm surprised beyond belief and i'm deeply saddened by the news - wow!!

like many here, I only knew Jack through his writings - but it was clear that he was a very special person with an individual personal style and an even more unique way of thinking; quite wonderful and endearing attributes in a world that is sadly full of followers and homogeneity!!

My sympathy to all of Jack's friends (and family- not sure?) for what I have no doubt is the devastating loss of such a central figure in your lives.

My thoughts and sympathy are with Jack's family and friends at this sad time.

There are many good memories of Jack's contributions to this forum and to the VAG community in general and he will be sorely missed. He espoused the mantra of 'teach someone to fish and they will never go hungry' in his own inimitable style.

What terribly sad news. When the forum first started and I came across Jack I realised straight away that he was something special. His sometimes unintelligible way of leading people to a solution for their problems always made me laugh. His generosity in time and in his business was beyond the call of duty! I just know if we had been in the same locality we would have been great friends.
My condolences go out to his family and friends.
RIP Jack
HMC
Apr 12, 2021 #13

R.I.P. Jack. You are missing... Condolences to his friends and family.

We all lost a friend yesterday. Jack's passion was doing things right, teaching others to do things right. Whenever his hackles were raised, at the root was this sense of "right". Jack lived and breathed autos and all things mechanical. He had other passions especially his lovely wife Lori, but in the main when one talked with Jack, the conversation was going to be about autos. He possessed an unending knowledge that many have already spoken about.

Setting those words aside and despite Jack calling himself derogatory names, in all of my meetings with him, I found him to be a gentlemen and a kind soul.

May he rest in Peace and may this community surround Lori in this great time of her loss. She needs all the love and support we can offer.

Prayers for strength and peace in this time of grief Lori. We feel some of your pain for our friend will be truly and deeply missed.
Apr 12, 2021 #17

If I had a vote, that very sentence would be the epitaph on his tombstone.

Unlike most people here, I live close enough to Jack where I can pick up his home wifi. His shop is a mile from my house. He was my best friend for 25+ years, and I celebrated many holidays at his house over the years. He even saved the day at my wedding, taking my car over to his shop to knock a stuck rim off the hub and put the fourth race wheel on while I was getting suited up for the ceremony.

Part of my wedding agreement with my wife was an understanding that my Thursday evenings were Steak Night with Jack. It started out as a steak BBQ at the shop every Thursday evening for friends in the 1990's, and evolved into Thursday night outings to various area steak restaurants for dinner with friends. Sadly, my attendance has been limited since my long hospital stay a few years back, and I was completely absent for the last year because my medical situation makes me a high risk for complications from COVID.

Anyway, my wife was over at the house with Lori and his family as part of the vigil, and as dog-sitter while she was at the hospitals. Please keep Lori in your thoughts. Please also do not let your guard down, because whatever this strain of COVID is that's going around is playing for keeps.....

Jack at the Middletown Outback Steakhouse one Thursday night, showing off his special-order fried broccoli in blooming onion batter: 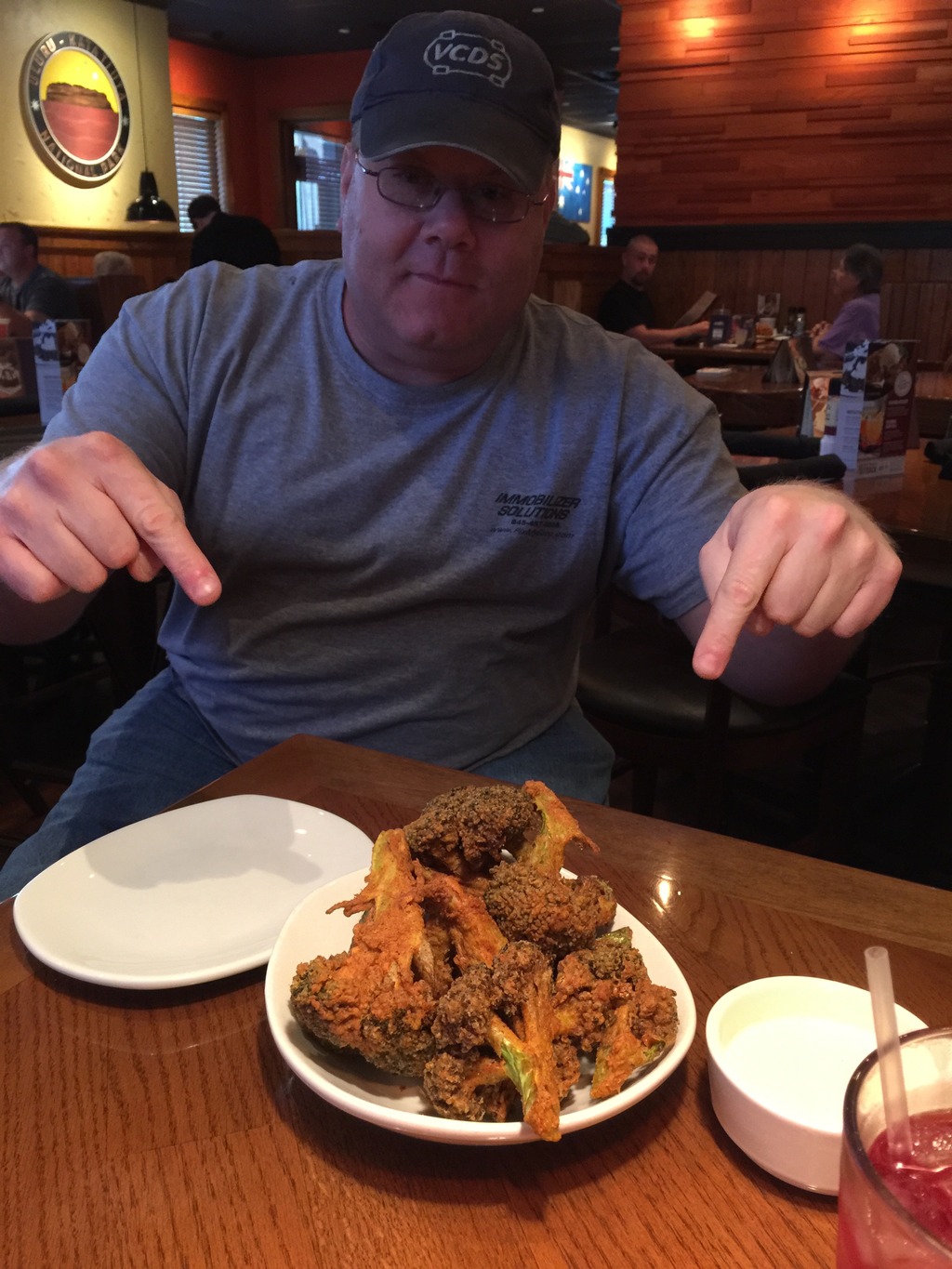 A message that makes me very sad.
My condolences to his friends and family.
You must log in or register to reply here.
Share:
Share Link
Top