So I'm fitting parts where they don't belong. Again.
In this case it's a Polo 6R which comes with a Bosch ESP8.2i from factory.
Being fitted is a TRW MK60EC1 from the PQ35 platform.

The link is that the MK60CE1 was definitely fitted to PQ25, for example, the Beetle 5C and the Jetta had this ABS computer.
So gateway should be fine and G85 should be fine. 7E0 + 6R0 G85 are a match.

The ECU and immobiliser data are from a Golf MK6, so the Polo ABS nopes out because it cannot understand the MK6 1K VIN.

So I fitted a MK60EC1 ABS unit provisionally, meaning I only connected +30, +15, GND and canbus.
Is this enough to throw codings at it? Or will it refuse any coding unless the wheel speed sensors are connected?

Any other suggestions will be appreciated
And if it requires to connect the wheel speed sensors, let me know

this is just a speculation but i dont think so...
whenever i have tried to code mk60ec1 and even when i knew original code i had to do at least g85 in order for code to be remembered, as for abs sensors i dont know
i can post some guesses if you need them...
Mar 18, 2021 #5

Yes please have a go at some codings

iichel said:
So two questions:
- Can a MK60EC1 be coded 'on the bench' with i.e. wheel speed sensors disconnected?
- Anyone would like to have a guess at a possible ABS coding for this setup?
Click to expand...

For the MK100 from T6 i can say, i was able to do coding on Bench in your setup.
But when i tried Basic-Settings it refused.
Later i found out that "brake" pressed Signal needs to be "not pressed" for Basic Settings and with nothing connected it is pressed.
Mar 18, 2021 #7
M

I was successful with

Next step is basic settings, of course it was on the bench-ish so I could not show the car I was driving.

Is there any way to code out the power steering? It's complaining that it cannot communicate to the power steering module, which makes sense-ish since the car has a different rack fitted than the Golf Mk6 does.
Mar 21, 2021 #9

So some progress, fitted the entire set to my other Polo with an electromechanical steering rack rather than a electrohydraulic rack. So I managed to produce my longest VCDS autoscan (over 1200 lines) so far:

So the list of unhappy modules, I've greened the grouped the modules by unhappiness


Code:
So we have some happy modules next to some non-ABS related unhappiness:

So it appears that some errors are simply unhappy because they simply don't have a speed signal:

Then we have some modules that are simply unhappy since the ABS is unhappy, either directly or indirectly:

Which just leaves these modules as a set of unhappy modules:

So... perhaps this will end with a non-functioning high beam assist because I'm not sure this error will go away. But otherwise I'm feeling confident this might actually be doable

New test with a Beetle 5C cluster + Beetle ECU + BS MK60EC1 ABS controller
The good news is... it works and I managed to code the ABS controller.
The bad new is... it will require some work

I'm sharing with you a little victory. And a very big relief.

HAVE A LOOK HERE 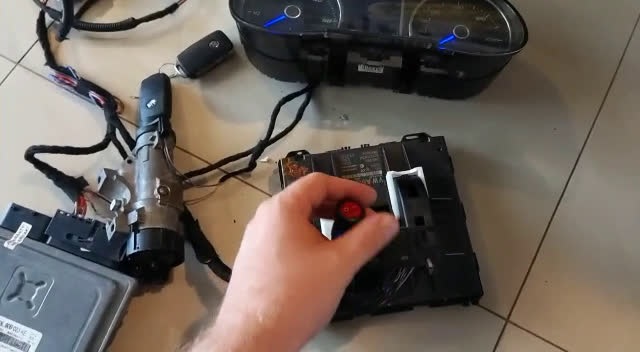 What his means is very significant. You see, this is a cluster with immo data from my 1.2 TDI.
With the ECU for a 1.6 TDI. And it's happy. It's very happy. Key is found and immobiliser is MATCHED.

So I want to tell you the significance of this. Having a matched immo for ECU/cluster helps a lot in starting your car.
And it has been a struggle to find the right solution.
You see, I'm putting a 1.6 TDI engine in a car that was born with a 1.2 TDI engine. Why? Because I can. Should I? No.
But why would you do such a thing? Because that's what I like to do.

Swapping an engine is easy. On my Karmann Ghia, it takes an hour to put in a new engine. And that includes taking out the old one.
And then it goes. Like nothing happened.

The Polo 6R 1.2 TDI PR-7L6 has a different construction.
In this case, the ignition lock goes to the ECU via a small wire. The ECU then operates two starter relays, that send power to the starter motor.
So you cannot start until the clutch is depressed. AND you can do a little click of the starter position with the key, and the engine takes care of it all.
Now the kessy also utilizes this construction. You press the start button, ELV (steering column lock) tells the ECU to start, ECU closes the two relays and off we go, starter motor goes round.

Well, I had a solution. I got myself a matching set of a KC ECU (beetle 5C) --> PR-7L6 + PR-G0C! With a cluster, ELV, 2 keys and kessy module.
Wait, didn't I just say G0C was manual? Yes... I can flash it with KE firmware. I have that. No issue. But such a FW doesn't exist for the 6R0 ECU (different hardware). Bummer.
So I could bolt the ELV to my car, transfer the immo data to my cluster and be a happy man. I have the man for this job, mr Slavik himself.
You see, mr. Slavik is a hero, he helped me to figure out a lot of things and he is paid not in euro's but in crates of beer. This is a fact.
I visited him a few times and even though my ideas are crazy, he never said no.. This is the kind of people I need.

So I connected all the parts to my polo.
Fuck, my dash is a fucking christmas tree.
The ABS was very unhappy. My Bosch ESP9.0i of course doesn't understand what is happening. It is expecting a Polo 6R, Fabia 5J, Ibizia 6J or an Audi A1 8X pre-facelift.
And it is seeing a 2013 VW Beetle 5C (WVWZZZ16ZDM800039 is not a Polo VIN, definitely not my VIN).
So, out we go with the ABS coding. It's all zeros. And I could not come up with a new ABS coding, something I'm usually very good at.
So I was having a bad day.

And I went, fuck it, I'm having a Beetle ABS. So I bought a Beetle ABS unit, 1K0907379BS, from my favourite shop happyparts.
And I put it on the bench, connected cluster and ECU and I did find a code for it. I like coding ABS units. I never owned a car with a Mk60EC1 but I do know how to code it.

So that was the plan. My Polo was becoming a Beetle. All I had to do was...
- Put in the ECU
- Flash the ECU from KC to KE firmware for the DSG gearbox
- Swap ELV
- Transfer the immo data to my Amarok cluster
- Swap or code kessy unit
- Learn the keys
- Swap the ABS unit (so different plug, wheel sensors). I have it all here, by the way.
- Learn the ABS (I already verified that it will work with all my other systems like power steering, steering angle sender, etc).

Hey, small effort, right? I already put in the engine and gearbox, this is no hassle. I'm kessiichel, I can fix this... Just some wires and some coding. No big deal.

Then Mr Slavik (I already noted that he is paid in beer, right?) told me about a program to re-calculate the immo data of an ECU.
Until now I've always been told that this is not possible for Siemens PCR2.1. Only for Bosch EDC, where you can edit immo or make it immo-off.
PCR2.1 is more difficult and until now, everyone told me it's not possible. Or to fuck off.

So, now, let's see what we have:
- My Amarok cluster with Polo FW (already had that)
- Kessy ELV matched to Amarok cluster
- My own keys
- My own BCM
- My own kessy module
- My own ESP9.0i
- My own 1.6 TDI ECU with my own VIN. And GRA_High enabled in ECU flash.

I'm even as brave as I can say... this new ECU... is more or less plug and play :twisted:
(I probably still need to adjust the injectors and some basic settings)

Why did you not went for a 2.0 TDI engine, higher power output and you could get easy over 200 hp

Did I already tell you I finished the project? The 1.6 TDI engine and DSG gearbox have been retrofitted to my 1.2 TDI car
So now my car doesn't have a single of its factory control modules anymore.

iichel said:
Did I already tell you I finished the project?
[...]
So now my car doesn't have a single of its factory control modules anymore.
Click to expand...

And it has fewer fault codes than some brand new cars we see scans of!

admittedly, i did cheat a little bit by clearing some errors before i made the scan. the engine keeps going into overboost mode, i need to find a way to adapt the turbocharger.
Aug 21, 2021 #18

iichel said:
i need to find a way to adapt the turbocharger.
Click to expand...

I guess you have already tried this Basic Setting?
IDE00897 -- Adaptation of the turbocharger

Yes, I have indeed tried it. It shows some funny behaviour. It increases engine revs from 850 to about 1300 rpm, and it displays 'not running'.
And it just keeps there until you stop it.
No message to depress brake pedal, release brake pedal, depress accelerator pedal, running etc. In the meanwhile I can simply play with the accelerator.
Sep 2, 2021 #20
L

Did you ever solve this problem i have the same with 1.6 tdi checked everything and still showing p2563 but only while idle and not while driving
You must log in or register to reply here.
Share:
Share Link
Top