Hi all, first post! Glad to finally have VCDS!

I've been wrestling with this one for a couple days now, and after registering for VIS, I've got a bit of a breakthrough, but still not quite enough to go on.

Gear lever position is listed as "ERROR" in MVB's, but the binary codes are coming through, but they seem to be missing the 4th (or 1st, depending on how you look at it) bit.

The car drives (in limp mode unless I clear codes, but it comes back after a shutdown), but PRNDS always indicates "D", except for Reverse, which appears to come up correctly.

F125 has been replaced with a BRAND NEW switch, but still:

According to VIS4VAG, I should be seeing:

There is some fraying on 2 of the wires on the connector to F125, but there appears to still be continuity. Resistance may be higher though, causing a bit to not be read.

My question for the forums: is there a pinout of that connector that shows which bit is controlled by which pair of wires? I'd like to tap into the wires and fake that bit out for the computer to test it before I go hard and spend lord knows how much on a new pigtail (looks like $90+ at various online sources...and I'm not even sure if it's the correct part).

EDIT: I should mention, unsurprisingly, when I reset the codes while it's in D or N, indicators between D and N work correctly, because those binary codes are correct with a 0 in the 4th (1st) bit. This lasts until the selector is put into an implausible condition (anything but D or N)
Dec 3, 2020 #2

anyway here is some wiring:

iichel said:
Could you add some autoscan to see the exact part number?
Click to expand...

Code:
And the engine:


Code:
Is there any way to glean, from that wiring diagram, what pins DO what? IE. Which wires would I have to jump to fake a "1" in that first/fourth bit? Obviously I could check continuity between the TCM and switch plugs, but the TCM isn't exactly easily accessible, being under the wiper cowl.
Dec 3, 2020 #5

Fair enough! I don't see how pin 2 gets to ground, unless the reference to 42 ultimately ends in a ground, but those 5 connections to the TCM are what matters here.

One problem: My wiring colours don't match the listed colours in the diagram above. Grounds are in the right spot, positive appears to be in the right spot (although a few have battery voltage when I check with the connector disconnected and the car running anyway), but my bl/ge (blue and yellow, I speak german, and have a VW colour reference) is at pin 5 according to the back of the connector, as opposed to pin 8.
Dec 3, 2020 #7
D

I've worked out how to get each bit in the 4 bit sequence to move, well, except for the one bit giving me trouble. From right to left, control is by grounding: pin 5, pin 9, pin 7....and I don't know what for the last one. I'll note that neither pins 8 or 1 have 12v, like pins 5, 9, and 7 do, so presumably one is for a different switch (reverse, perhaps).

Looking at wire diameters (not a super reliable metric, but that's what I'm going on) and some moderate logic to having all 4 bits on one side of the connector, I THINK it's pin 1 that should have 12v, but doesn't.
Dec 3, 2020 #8

I think I found your exact car in my Elsa, it's a 9B3 code with a BEV engine, correct?

Does this match your colouring?

Looks like pin 8 goes to another unit (whatever B565/connection 32 is), and I deduced pin 1 correctly.

Pin 8 is the reverse light signal

J217 is located in the plenum chamber 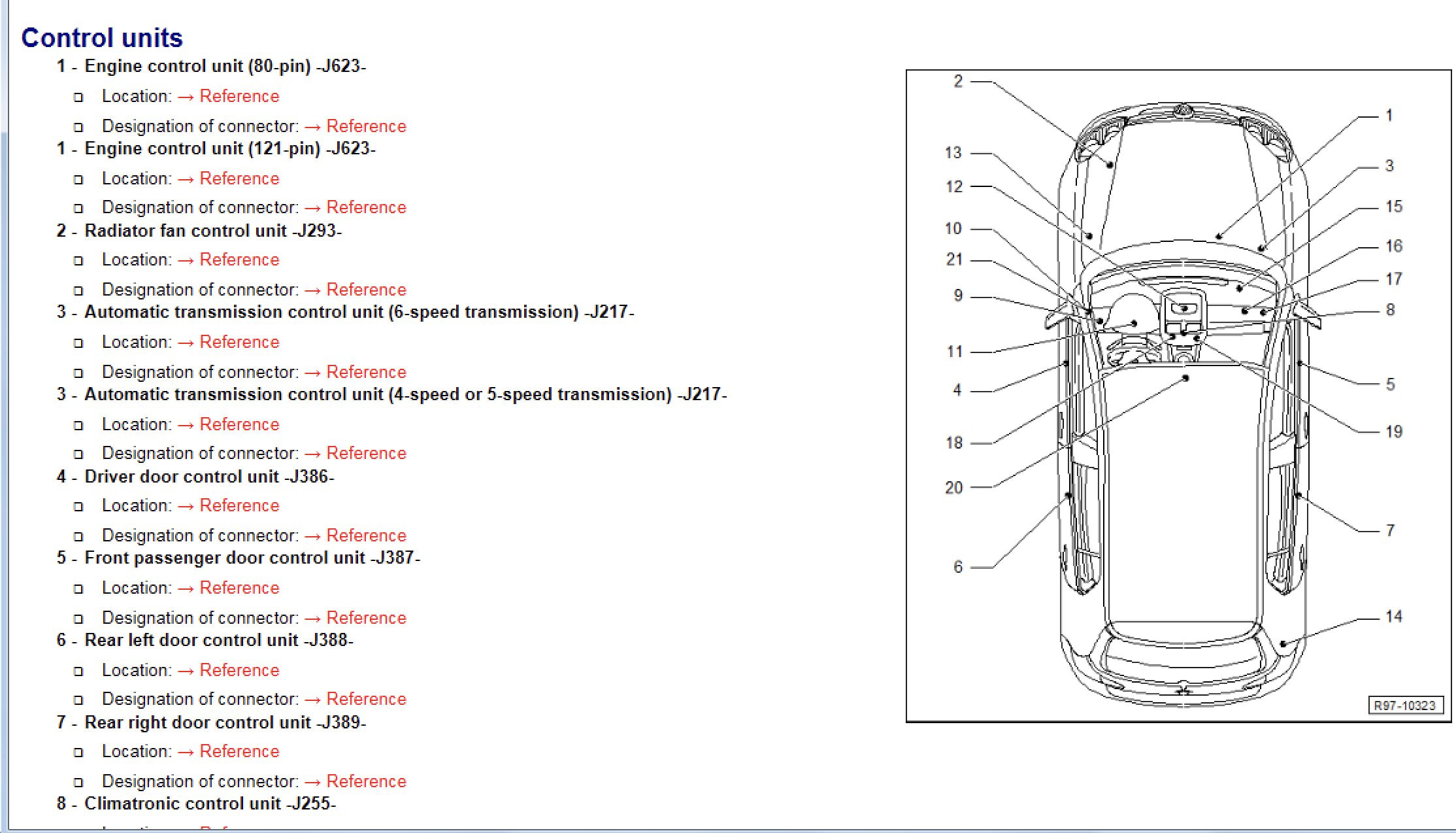 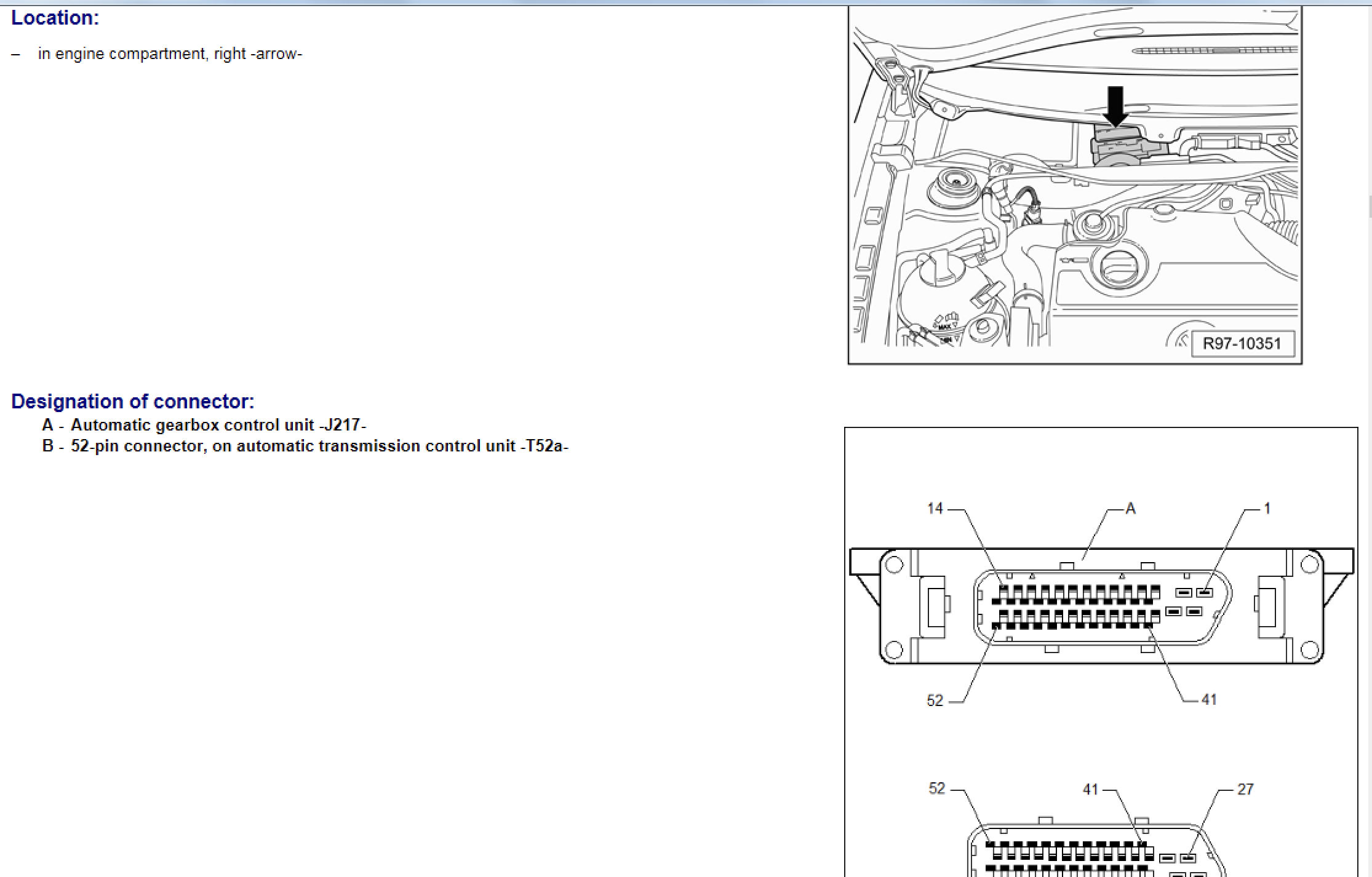 Alrighty! I fixed it, solder and heat shrink and boom. Problem is, now I've got a couple more codes!

I'm assuming I bumped something, or something pulls its signal from the remainder of the circuit I skipped (though I connected all 3 ends in my splices, for that case specifically).

Ack....not getting any voltage on pin 10 anymore, even tried disconnecting my fix, still no voltage.

That one doesn't cause the PRNDS to light up as long as the jumper for pin 1 is in place, but the tiptronic implausible signal does. Did I muck something up on the TCM connector maybe?
Dec 3, 2020 #13
D

The wiring diagrams come from elsawin. You can also have a look at VW Erwin and download (print to PDF) all information for your car.

So please tell us what the problem was. What wire needed repairing and more interesting, why?
Dec 3, 2020 #15

Just make sure to use the NAR market website:

Wire that needed repair was pin 1 (white/black) on the range sensor, which goes to pin 47 on the TCM. I just pulled back the tape on the main harness at the TCM, snipped the wire, and solder spliced a wire in to jump it. The wire is probably damaged somewhere in the wiring harness, and I don't have the time/space/desire to pull all the parts necessary to get at the whole harness. I just ran the wire through a grommet that already existed in the firewall and zip tied it out of the way as it made its way to the intake and down to F125.

I will say, without VCDS, this would have been downright impossible, and I'd bet a shop would have cost 3+ hours of diagnostic time, and wouldn't have done my ghetto fix -- they'd have replaced the harness where it was necessary, and it would have run easily into the thousands. This bad boy has paid for itself lol
Dec 4, 2020 #17

Your help is much appreciated! For interest, here's a pic of the "fix". Just the white wire hanging out doing it's thing

The red bullet connectors are from where I snipped the wire to test if the fix caused the other codes, then just reconnected with simple crimp bullets. I figure worst case it corrodes there and I know exactly what to do to fix it, and best case it just lives like that forever.

Excellent. If/when the vehicle needs a battery (hopefully not in the dead of winter this year) you can pull the tray and run a more permanent overlay under the airbox, through that tunnel into the cowl on the driver's side and across the cowl zip tied to existing ECM/TCM harnesses. In the meanwhile, I agree. Good enough for a December fix in my book.
Dec 4, 2020 #20
D

Dana said:
Excellent. If/when the vehicle needs a battery (hopefully not in the dead of winter this year) you can pull the tray and run a more permanent overlay under the airbox, through that tunnel into the cowl on the driver's side and across the cowl zip tied to existing ECM/TCM harnesses. In the meanwhile, I agree. Good enough for a December fix in my book.
Click to expand...

AH! That's a fantastic idea, I hadn't even thought about that, it will in fact need a new battery soon-ish. Definitely hope it makes it to the spring -- I'll have to put a tender on the battery, we don't commute anymore, given the pandemic. Gotta do the timing belt next year anyway, so I'll be all up in there. Let's just hope the wipers come off easier this time. Took a good few hours soaking in PB blaster before they'd come off.
You must log in or register to reply here.
Share:
Link
Top