I wanted to check here before tinkering around my Crafter (Chassis Type: SY-VN54 (3Q0)
Most tutorials seem to use the Stop Start Voltage limit, but when searching in the menu in VCDS I found option as in the picture below. "IE04159 - Deactivation of Start Stop Function"
The New Value menu menu has I think 4 options and they don't make much sense to me. I am struggling to remember them and did not noticed they were not captured in the screen pic. 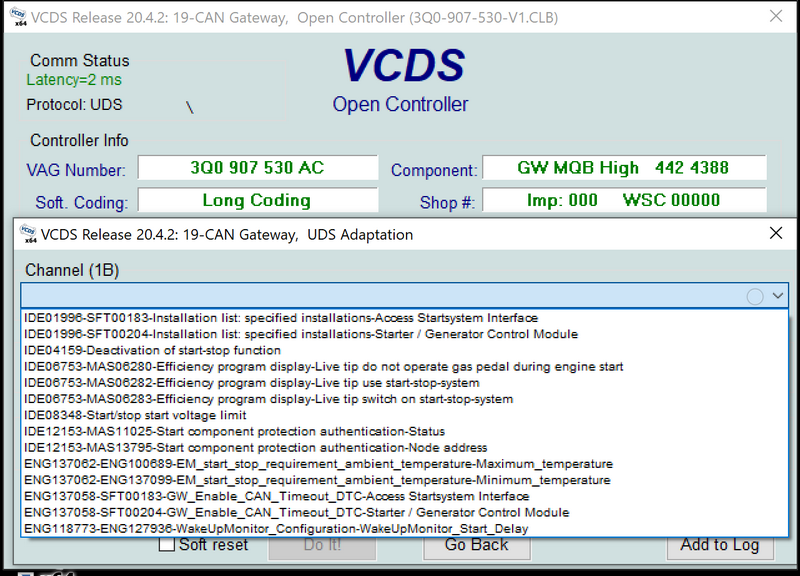 So I guess my question is: Is there more info in this menu item and its options ( is this a preferred way to the voltage workaround) or is the workaround still the best way of doing this.

Thanks in advance for any advice!

also, if anyone knows...
I believe there might be a way to invert the function of the button as well, so by default start-stop is off and by pushing it I can temporarily turn it on?
I would love to to that on both my cars...
Sep 16, 2020 #2

@Ouchie : Hi. I don't know the answer to your question, but your (MQB platform) Crafter uses UDS control modules - so the process for disabling SS on your early Tiggy won't be applicable.

As for your screenshot, the channel IDE04159-Deactivation of start-stop function likely will appear in a number of modules on the Crafter. On my (MQB platform) Audi A3 8V, this channel is reported in the hex19, hex08 and hex05 modules. And, on my early Golf mk7 this channel also appears on the hex19 and hex08 modules - plus, the inverse channel IDE04158-Activation of start-stop function appears on the hex01 module.

I've not fiddled with your pictured channel, but I note that there are also a number of software switches in long code for the CAN Gateway module related to the SS option (i.e. Byte 4 -Bit 0, Byte 3 - Bit 2-3 and Byte 15, Bit 0 to 0). I've not done an extensive check of all modules, but I suspect that other modules will also refer to SS in their long code/adaptation. So, you might consider that there needs to be a consistency between the adaptation channel setting for IDE04159 and the SS long-code software switches - at the very least for the hex19 module.

I am aware that some have claimed success by changing the hex19 long-code values above, but the point of my preamble is to highlight that SS seems to be intimately integrated into a number of modules on MQB platform cars. I suspect that it is because of this complex inter-connectedness that folk have tended to use the "voltage", or "temperature" method (which disables SS by tricking the function), rather than attempting outright deactivation.

Anyhow - if you do experiment with IDE04159, please report your observations.
Don
PS: Another consideration with outright deactivation of SS on MQB platform vehicles is the impact on battery recuperation


Ouchie said:
also, if anyone knows...
I believe there might be a way to invert the function of the button as well, so by default start-stop is off and by pushing it I can temporarily turn it on?
I would love to to that on both my cars...
Click to expand...

It's also been reported that on 2020 MQB vehicles the firmware has been changed so that none of the coding/adaptation methods for disabling SS work any more - allegedly due to WLTP emission compliance.
Sep 17, 2020 #4

PetrolDave said:
It's also been reported that on 2020 MQB vehicles the firmware has been changed so that none of the coding/adaptation methods for disabling SS work any more - allegedly due to WLTP emission compliance.
Click to expand...

True, but a Crafter isn't exactly an MQB, so it's unclear what is and isn't possible here.

Firstly, thank you yet again gents for a prompt and very informative replies!

@DV52 - Thanks for the all the info, I do understand now much ore about the problem now. I don't think I will try to experiment as I lent the van to a friend for a little while and can't risk any issues when not around with my dongle.
I think I might try the voltage workaround as it seems to be the easiest way. I will report back if it still works.

Why do you hold such a belief?
Click to expand...

I have seen a tutorial about it somewhere and the dude in this video seems to have done such a thing (button is lit up by default, so SS is OFF - he did show the light on but not the SS being disabled in real situation)
https://www.youtube.com/watch?v=QNvRfyZJq90

Thanks again for all the info. My Tiggy works just fine and I never had the need to be actually able to turn the start stop on... I was just wondering as you guys are pretty amazing when it comes to figuring this whole VAG enigma out

@Ouchie:hmm......... that particular video happens to relate to a mk1 Audi Q5, or maybe it's an A4 (in any event it's an 8k platform). Alas, it's a very different vehicle to your Crafter and it uses pre UDS controllers