I have had the need in the past to charge my MacBook while being around, and Apple never released a car adapter. so I decided to retrofit the OEM inverter in the car, as it may come handy for something else too, who knows.

the inverter is an option (PR code 9Z3) only available on the Golf Wagon. original part number is 5Q0 907 155, then there are different versions with different index, but all very similar. I chose index F, coming from a Tiguan. rated output power is 150 watts over 230 volts.

the inverter has only 3 wires: GND, a fused Terminal 30 and LIN-BUS. I chose to install it behind the glovebox, I just tied it to a big wire harness that runs from behind the lower A-pillar to the upper part of the dashboard. there is also a GND nut close by, under the door sill, and that is where I connected the GND wire. I chose to dedicate fuse C44 to the inverter, so I ran the wire from behind the cabin fusebox to the inverter. T30/GND wires are 2,5 mm2 section.

LIN-BUS is pin3 on the Gateway, but it can also be found on pin7 of the BROWN connector behind the lower A-pillar on the driver's side. so I spliced in the wire and run a 0,34 mm2 section wire to the inverter.

total installation time took 3 hours. the most challenging task is, as usual, inserting the pin for a new fuse from behind the fusebox. it is struggling, takes a lot of tries and patience, but it can be done without moving the fusebox. removing the knee airbag is mandatory, to gain better access of the rear of the fusebox.

the inverter has a single 2-prong socket, with a red/green LED and a NO limit switch that detects when a plug is inserted. I have scraped the whole assembly, instead I ordered a power strip with 3 CEI 23-50 P40 sockets, this will accept every kind of plug we use in Italy. I will velcro the strip just above the passenger mat, basically on the carpet under the glove box. I don't have a dual color LED, so I will install separate red and green LEDs. for now I bypassed the limit switch by joining the two wires together.

coding is straight forward into the Gateway, BYTE 0 BIT 3 and BYTE 7 BIT 0 need to be ON.

NOTE: with the limit switch bypassed the inverter is always ON (LED is green), even with the car locked, even after one hour. I might install a toggle switch on the side of the power strip, I assume it would act as an on/off switch. I expect the LED to go red when the plug is unplugged, but I am not certain of the behaviour since my car manual does not mention the inverter.

I will post an updated autoscan in the non-broken section. I will add a picture here once I get the power strip and finalise the installation.
Last edited: Aug 3, 2020
Aug 2, 2020 #2

If I remember correctly, your retrofits have been quite OEM but this 3x power strip in the passenger footwell doesn't look very OEM to be honest :/
Aug 3, 2020 #5
F

I have a customer who lost his cabin blower motor on a very cold day. He plugged his hair dryer into the inverter to defrost the windows and POOF it was gone.
Aug 3, 2020 #6

Fred's Imports said:
I have a customer who lost his cabin blower motor on a very cold day. He plugged his hair dryer into the inverter to defrost the windows and POOF it was gone.
Click to expand...

siLc said:
If I remember correctly, your retrofits have been quite OEM but this 3x power strip in the passenger footwell doesn't look very OEM to be honest :/
Click to expand...

not at all, but it will be convenient and useful. also, you basically don't see it unless you put your head down there and look for it.
Aug 3, 2020 #8

Fred's Imports said:
I have a customer who lost his cabin blower motor on a very cold day. He plugged his hair dryer into the inverter to defrost the windows and POOF it was gone.
Click to expand...

here in Italy we have a common saying that sounds a bit like "mother of dumbs and asshoXXXX is always pregnant"...
Aug 3, 2020 #9

this morning I scanned the car again and last night the gateway flagged a DTC, "QUIESCENT CURRENT TOO HIGH", so I assume it would be better to restore the limit switch

I separated the limit switch wires and the LED turned off. so I guess it goes red when there is something wrong.

following Xagico PDF about the inverter retrofit, he enabled two bits with ODIS-E. the two bits I enabled have the same name in experimental coding.

will try disabling. I am not sure what you said about the other bit, your grammar is a little twisted. no offence intended.
Aug 5, 2020 #13
N

I hear you loud and clear. however, if I disable BYTE 7 BIT 0 then the inverter does not work anymore. I am suprised that no other gateway has the same bit enabled.
Aug 8, 2020 #15

I checked all the autoscans I could find in the non-broken section and BYTE 7 BIT 0 is disabled indeed, even in Tiguans with the very same part number of the inverter.

I tried again and the inverter does not work without that bit enabled. what's going on?

darkchina811 said:
I checked all the autoscans I could find in the non-broken section and BYTE 7 BIT 0 is disabled indeed, even in Tiguans with the very same part number of the inverter.

I tried again and the inverter does not work without that bit enabled. what's going on?

Darkchina: We have only met once - but within the first few minutes of our conversation, I was struck by your tenacity and your barracuda-like dedication to problem solving (which is a good thing); it's a trait that is clearly evident in your quest to resolve this problem!!

So - my guess at a possible answer goes like this:
Here's a very much simplified version of the WD for U13: 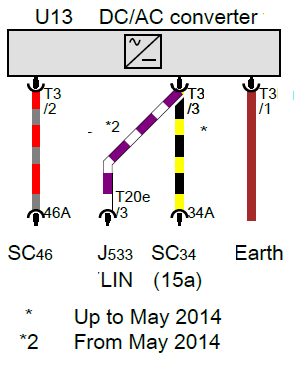 The trick (I think) is in the "*" explanations in the picture. Being a 150 Watt device - clearly U13 needs to understand when the ignition is switched ON/OFF to restrict battery usage. Reading between the lines - my suspicion is that there was a change around 2014 for Golf mk7s in the way that the device understood this condition -as follows:
Now, I understand that for your car and for the particular U13 device that you installed, you connected pin# 3 to the LIN wire and you correctly flipped the long-code switch on J533. But, I wonder if perhaps you might try running a T15 voltage to pin#3 instead (and reset Byte 7, Bit 0)

PS: if my hypothesis is correct - it begs the question as to why your T15 driven U13 module works with the LIN connection? I'm guessing (again) that it might have something to do with the inherent DC Volt component in the LIN message - maybe? It would be interesting to measure this; with a multi-meter set to DC Volts - measure the LIN wire volts with and without the Byte7/Bit0 switch enabled - perhaps? The reading won't be high (again guessing), but if it is elevated with the LIN function enabled - it might indicate that the lower threshold of the wake-up/sleep facility ain't very large - perhaps? Or it might be that the control mechanism in U13 is looking for a voltage "edge", rather than a DC level?
Last edited: Aug 9, 2020
Aug 9, 2020 #17

hey Don. thanks for your insight. however I must confess that the grammar-complexity of your posts often confuses me. I mean, it is quite admirable and it contributes to my ever going smoothing of my english, but sometimes I am like, why is he saying this with 100 words when 20 would be enough?

anyways, I don't actually have... a problem. the inverter works just fine. the quiescent current DTC was flagged because I had bypassed the "inserted plug" limit switch.

I am just curious as to why I need the bit on while ALL other cars have it off. even after 2014, even the SAME inverter, blah blah blah. check these two Tiguans out:

the inverter pin3 definitely needs LIN and not a T15, that is confirmed because it is correctly detected as a subsystem of the gateway.

just for the sake of information, mine works even with the ignition off, the trigger seems to be the limit switch (which I converted to a manual switch).

a friend of mine told me sometimes coding for a retrofit is not the same as coding from the factory. actual example is my footwell lights, which came stock with the car. they are not coded in the BCM, but... they work. here I am facing a similar situation and I am just curious.
Aug 9, 2020 #18

oh, here is the finished job, so now you guys can start with "how horrible is that?" and all related comments