Hello and good morning! Let me start off by posting a link to the car scan from vcds:

Now, my question is this. My gauge lights automatically brighten and dim depending on the ambient light. Personally, I find this annoying and would prefer the gauge lights to be bright all the time and then dim when the headlights come on. Is this tweak possible? AFAIK, this is not a setting that is currently adjustable in the vehicle. Assistance would be appreciated.

Thank you in advance to all the knowledgeable ladies and gentlemen.
Jun 18, 2020 #2

There's a whole bunch of Adaptation channels for "dimming_characteristic..." as well as some for "Illumination_algorithm" in your instrument cluster, but I've got no idea where to even begin to get the results you're looking for. So I might suggest you post an Adaptation Channel Map from your Instrument Cluster so people can see how all those channels are currently configured. Then, hopefully, someone can make suggestions for you to try.

As Uwe has suggested, a hex17 admap is a good start -but in the interim, perhaps a brief explanation as background for the eventual tweak that will be necessary for your wants.

MQB Platform vehicles have at least 2 x light sensors; the more recognized light transducer sits behind the upper windshield and it monitors the ambient light levels -ostensibly to control the cars exterior lights. The second, less known light sensor sits behind the "7" and "8" numerals on the tachometer dial - see below. This second light transducer is a photo-transistor - which is an electronic device whose 'gain' changes with the quantity of light falling on its body. The role of the photo-transistor is to monitor the ambient light level inside the cabin and to vary instrument panel illumination with changing levels - the photo-transistor uses the adaptation channels that Uwe has identified for this specific purpose. If you shine a torch onto the area in the picture below - you should see how the photo-transistor modulates dash lighting. 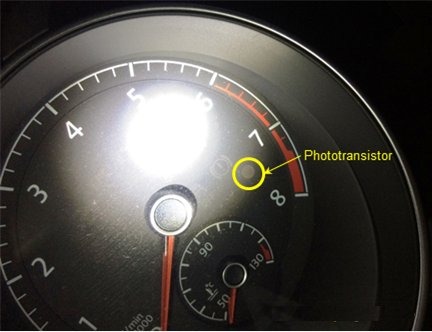 So -with this diatribe as context, you will need to decide what part of the dash illumination you want to modify? For example, you could change the full gamet of cabin lights that are captured by the photo-transistor - by modifying the illumination curve of the photo-transistor, itself. This might sound compelling, but depending on the degree of modification, this approach can have unintended consequences -like making the MIB screen illumination too bright.

The other, more targeted approach is to selectively modify the illumination curve of particular lights. For example, an effective tweak for changing the dashboard lighting can be to modify just the illumination curve for the clock dials on the instrument panel - because these are primarily the driver's focus during the day (and night). But ultimately this decision is yours -and the work-effort (and I suspect the amount of experimentation needed) will be determined by this factor - IMO, of course.

Holy moley! Only the germans would over complicate dash board lighting lol.

I really appreciate the insight and I am going to work on this slowly. I will post the adaptation channel map sometime in the near future.

Also, I’ve seen that second sensor and thought it was a warning light for the DPF lol.
You must log in or register to reply here.
Share:
Link
Top