I thought about this and I think I am gonna pass. too many unknown variables, plus I don't really want to pull down door panels again, tamper with door connectors, all that stuff.

what I am truly interested in is actually just a front camera, I have scratched the bumper while parking sometimes because of a high curb. so now my mind has started thinking about two possible scenarios:

- installing just the front and rear cameras with the Area View control module, but for sure it would complain about the missing side cameras and refuse to calibrate.

- as soon as I go home I need to replace the rear parking camera with the HIGH version (dynamic guidelines). so, what if I mount the old LOW camera on the front bumper and build a passive switch for the video signal into the MIB? like even a stupid DPDT switch, but I wonder if the 5F would throw an error because the camera gets disconnected in that instant while the switch is... well switching from one side to another. maybe there is a cleaner version to do this, like a solid state relay or even a Arduino board...
May 11, 2020 #22
D

I would think there will be problems with that. With low camera back and front it might work but HIGH camera it has the intelligence inside the camera module. There's power, ground, video + and - and can high & low connected to camera module. So just switching the video signal with a switch most likely results in an error.

You would need to combine the video signals somehow from both sources. That is what the area view module does.

I don't mind pulling of the door panels. They're actually quite easy to take off in Tiguan. Now when I have to remove the bass speakers, I will use the opportunity to put some STP silver mat to the outer door panel. So win win

Unfortunately after looking at the wiring diagrams it looks like I need to pull the wiring to rear camera as well as the wiring is completely different so I cannot use it. Well no biggie but more work involved.
May 11, 2020 #23

I just realised that the camera is shown only when I put the shift in reverse, and I would like to see the front camera when driving forward. I guess the passive switch is out of the game.

which seems to be exactly what I want. I asked the seller for more information, since the picture is obviously another product.
May 11, 2020 #24

darkchina811 said:
I just realised that the camera is shown only when I put the shift in reverse, and I would like to see the front camera when driving forward. I guess the passive switch is out of the game.
.
Click to expand...

darkchina: interesting project - I look forward to reading your progress.
Here's the crucial part of the MQB platform WD for the camera that explains your (no-surprising) observation: 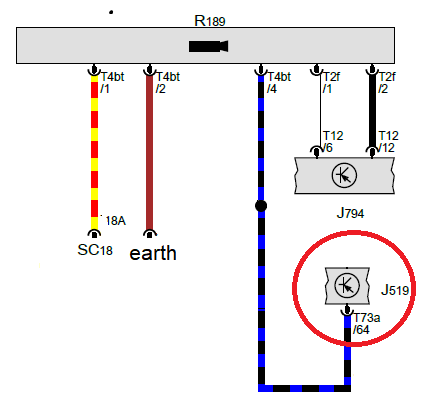 I've greatly simplified the original version of the WD to just include the pertinent bits. Notice the circled section which shows a single BCM pin. The other piece of information that accompanies the WD is the Leuchte-set, Leuchte29RFL RA64, which controls the left-side reverse light. As you already know, the "A64" in the Leuchte-set name refers to BCM pin 64 on socket A. This is the same pin as circled on my cut-down WD.

So, your observation is confirmed by the above WD - in fact, the switch-on signal comes from BCM T73a /64. However, whilst I haven't actually measured the signal form that the camera requires to switch-on, I suspect that the camera looks for a positive rising edge (i.e. zero-to-+ve voltage), rather than an actual DC voltage. I suspect that this is so because the camera switch-off requirement (as distinct from the switch-on requirement) is the forward speed of the car. As you are aware, this is set by IDE03782-Switch-off speed for parking assist in the hex10 module.

I suspect that this all means that the easy part of your project will be switching-on the camera (i.e.add a blocking diode in the left-side reverse lamp circuit and send a signal with a +ve rising edge to T4bt /4 on the camera). The more difficult task will be to keep the camera switched-on after the car achieves the threshold switch-off speed - I think.

Don, thanks for the suggestion but your theory doesn't stand. let me explain.

BCM pin A64 is indeed connected to the rear camera, but it just makes the VW badge on the trunk swiwel out. pin A64 is not connected to the 5F so if I "forced" that command manually I would pop the camera out but I would not see it on the infotainment screen. after checking the 5F wiring, there is no discrete wiring for the camera, and it means that it's all over CAN-BUS.

now, I am nowhere near to be able to design an interface to insert into the CAN-BUS to tell the 5F "show me the damn camera". I could build it and wire it, with instructions, but I can't design it.

Scheisse, the door connectors are different when car is fitted with area view

interesting. well what do you need, 5 pins only, right?

downtime said:
Scheisse, the door connectors are different when car is fitted with area view

But Yout current door connector doesn't have the signal pin for Camera.
It is similar to fakra.
May 25, 2020 #29
D

Yes I noticed that. But, as I have a chinese cable set coming to which I need to do the door breaks myself, I can utilize the existing blank positions. The connector pins that are coming with aliexpress set seem to be suitable for the normal door connector.

if you remove as little jacket as possible from the video cable, and know your shit while wiring, it will work just fine even if the door connector doesn't have a fakra-shaped carrier inside

Yep, that is my plan. Wiring and crimping new connectors is no issue

Well, ordered the new door connectors to doors and to car frame. Were only 9€ per connector so not that expensive.

downtime said:
Well, ordered the new door connectors to doors and to car frame. Were only 9€ per connector so not that expensive.

How much did you pay for the wiring?

When I've did Area View, Blind Spot, Trailer, GSM antenna for MIB2.5, DAB, Tire Pressure I've got it from a complete harness.. I've also have Dynaudio cabels for the interior just waiting to be installed in the car.

I already have blind spot (aka side assist) and Dynaudio in the car so I just need wiring for the area view.

Only real concern is the front camera wiring. I do not want to remove the front bumper. I already got the camera in place without removing anything, so I'm hoping I can somehow pull the wire as well. I just need to remove the wheel arch from driver side.
May 27, 2020 #35

downtime said:
Well, ordered the new door connectors to doors and to car frame. Were only 9€ per connector so not that expensive.

the variety of stuff on Ali is impressive, I just find it difficult to search for things at times, as the descriptions can be spell out in funny ways due to translations.
May 27, 2020 #38
D

even when you use part number directly, it finds nothing. Then you search for a connector as an example, it suddenly shows you the parts you were looking for.
May 29, 2020 #39
D

Ok new door connectors fitted to passenger side. However, not much use if the aliexpress wiring set needs crimping the pins and using standard VAG connectors.

The OEM door connector housings have a slot for the video signal. You put the complete connector to the slot and not individual pins. Aliexpress seems to have more proper kits that have these so you don't need to do any crimping.
I should've done my homework better. Shit!

I will be getting the wiring set on monday but it seems that I changed the door connectors for nothing. Oh and guess what, of course VW has changed the pin sizes on the new area view connector housing and I had to cut and solder. 4 wires per door.
And to make things even more fun, the pin positions are different with area view and without area view.