Mike R said:
I am only seeing data being compared between 2017 and 2018... where are you getting the info from in these links?
Click to expand...

Here's the deep link for the data:

What will be the new face palm?

Another moment of wonder bread oil sandwiches?
Tear down this wall we need cheap labor in Germany for South America?
No new taxes, except all these new ones and wars?
A fine wet cigar is not sex, it's NAFTA and twist of flight 800?
Mission accomplished we recreated the deficit and lost several trillion dollars and used more plane crashes to cover black budgets?
You can keep your plan, just not your coverage to enrich private insurance companies?
Please pass the disinfectant, I just touched a no no in the fish tank that stinks & paid for it?
Apr 30, 2020 #163

Im getting tested for C19 in the morning. Ive already been furloughed for 6 weeks. Although 6 weeks off work with pay sounds interesting Ive ran out of car shampoo the dog is knackered and my sleep pattern is all over the place
Apr 30, 2020 #164


Trump says he has evidence coronavirus came from a Chinese lab, but he can't reveal it

Who specifically and who is on first, what's on second, IDK is on third?

Who as in World Health Organization?

Who as in Woodsy the Owl ....just how many licks does it take?

Jack@European_Parts said:
Trump says he has evidence coronavirus came from a Chinese lab, but he can't reveal it
Click to expand...

Jack: Is this the same "Tump" who amazed the world with his innovative suggestion that scientist investigate the merits of ingesting/injecting disinfectant and UV "C" light as a possible treatment for covid?

On a more serious note: whilst no one thinks more highly of Mr Trump than me - and I think he is a fool (think about it

China's retaliation in threatening economic sanctions to the suggestion that the world needs to understand the origins of the virus is both disturbing and illogical.

On any reasonable basis and given the severity of the pandemic in every country on this fragile planet - not to undertake such an analysis would be a heartless act of disregard for the families of those citizens that have died, and it would be criminal negligence to those citizens who WILL die if/when a similar event occurs in the future.

China can't really believe that the rest of the world (and its own citizens) will be happy to not investigate the origins of the "Wuhan plague" (as a distinguished forum colleague has labelled this virus)?

China can't really believe that the rest of the world (and its own citizens) will be happy to not investigate the origins of the "Wuhan plague" (as a distinguished forum colleague has labelled this virus)?

https://topclassactions.com/coronavirus-covid-19/coronavirus-business-interruption-insurance
Last edited: May 3, 2020
May 3, 2020 #169

These models are laughably bad. I really wish I had screen-shotted some of the "predictions" on that site when Jason posted it back on March 26th.

But let's look at it now. And let's use Georgia as an example, because they're the state with the most aggressive re-opening plan: 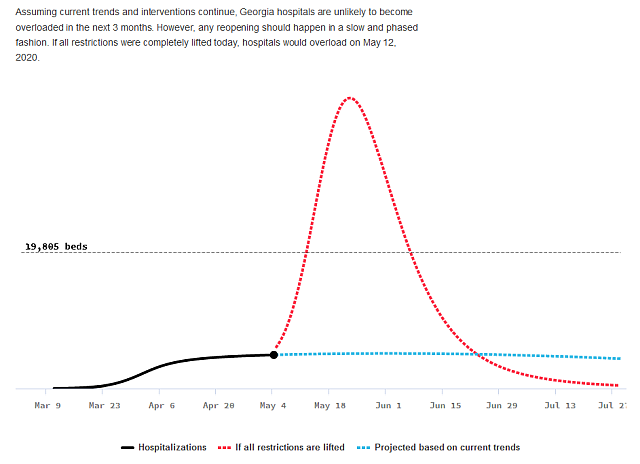 We have two scenarios here. One is "current trends" and the other is "If all restrictions are lifted". The latter is absurd. It predicts hospital bed capacity being exceeded (at roughly four times the current level) by May 12th, which is nine days from now. In light of the fact that that there's an average latency of 5-6 days between the time a person first gets infected and when they begin to show symptoms, and several more days pass after that before those symptoms will get bad enough that people are likely to seek hospital care, there is simply no way that curve can begin to rise immediately as it does in the above chart upon lifting restrictions, nor is it at all plausible for it to reach 4-5 times current levels in a mere nine days.

Moreover, lifting all restrictions does not mean most people will go back to their pre-epidemic patterns of behavior. Many (if not most) will continue to exercise considerable restraint. They'll keep their distance from others, they'll keep washing their hands, etc, etc. In fact, I'm quite confident that those people who are most at risk of needing hospital care as a result of getting infected (older, sicker people) will be the ones who exercise the most voluntary restraint. This means the infection growth rate will not return to the ~2.25 that it was back in mid-March, even if all restraints were lifted, and there's no way you can get a curve that looks like the one in this chart without infection growth rate returning to those levels.

Remember, just because a state allows you do stuff like go to a bar or restaurant again doesn't mean you're required to!

Lastly there's one really interesting thing I'd like to point out on that chart. Look at the very right-hand side. Notice that under the "current trends" scenario hospital bed usage remains nearly flat at current levels until the edge of the graph at the end of July. But under "all restrictions lifted" scenario, they drop below the "current trends" scenario by the third week of June, and by the end of July, they go essentially to zero! Think about that for a bit, and consider what it could mean.

Uwe said:
These models are laughably bad. I really wish I had screen-shotted some of the "predictions" on that site when Jason posted it back on March 26th.
Click to expand...

There's also another fallacy with this. Similar to the idea of overpopulation being a burden to the entire world, where in reality it's going to be regional. Georgia is a big place. Hospital beds aren't evenly distributed throughout the state equally to population distribution. Cities and denser population areas would be the ones at the most risk in such an event. Open up the less dense areas sooner, then in a month or so look to open up the more crowded locations.
May 4, 2020 #172

Mike R said:
Cities and denser population areas would be the ones at the most risk in such an event.
Click to expand...

Uwe: I agree - it's an indisputable fact that contagions that promulgate by human contact will (by definition) be more severe in higher density populations. And yes, history has confirmed this undeniable fact.

But - I wonder whether the covid experience has identified a relatively new (and just as dangerous) factor; the country's federation density? I compare the covid performance between similarly densely populated European countries and America - and I see dramatically different results.

Perhaps the fact that America has 50 x States is a modern extra dimension to pandemic performance. Maybe the fact that in counties that have a federation, the central government's obligation to accommodate the State's rights to take disparate approaches to virus control is just as important as population density? Remembering of course that China doesn't have this same obligation by virtue of it's Communist government

If I'm correct - perhaps it's time to re-write the constitution?

Pretend the EU is a single country. Then you'll have a comparable land area and population compared to the US. Do the results still look dramatically different?

So you can get this or spread COVID, failing to wear a mask, touching, screwing, a door knob or toilet seat but not a mosquito?

Sounds like extreme bullshit to me considering a mosquito transfers fluids and malaria as do fleas and a tick for other disease's?