MK60EC1 ABS modules use a complex soft coding structure that varies from vehicle to vehicle. We strongly suggest everyone run an Auto-Scan BEFORE information is lost.

The MK60EC1 ABS coding has data from the VIN in it, so coding will be specific to the VIN of a car. The following control modules have VIN data stored in them:
The VIN is shown in the [Advanced ID-1A] function of VCDS while connected to Addresses 01, 17 and 25. If the stored VIN data in those modules do not match each other, it is not possible to code the MK60EC1 ABS module. VCDS can not resolve VIN mismatch issues.

If the stored VIN data in address 01, 17 and 25 match each other, but do not match the car's actual VIN data on the dash plaque, then make sure to include a photo of the PR-Code label located in the trunk.

We get asked about installing used ABS modules. For the 2009 and 2010 year models, DON'T! Early MK60EC1 modules fail a lot and we have seen many cases of the used module failing soon after being installed, or just outright worse than what it was replacing.

If you go with a used module... make sure the part numbers match 100%... and accept your fate when the used module is no good. 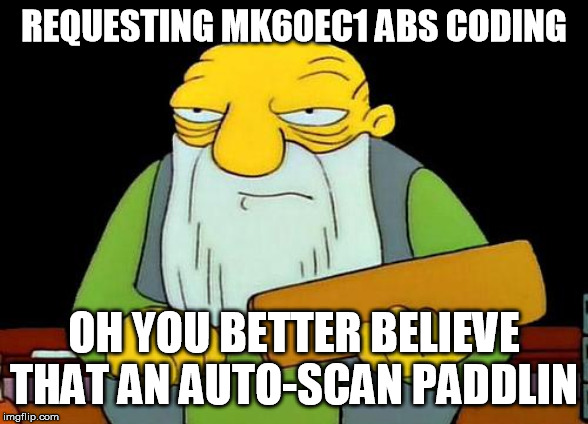 This post is blank for editing purposes. If you are reading this, you've gone too far. The real content ends with Jasper and his made with pride in America paddle.
Last edited by a moderator: Feb 6, 2020