pretty sure it's a settings issue on my end. running windows 10 fwiw.

went to replace a G200 and had to do the log in. enter the log in code and never got the "log in accepted" pop up.

being a new user and not wanting to do anything bad, I had a friend link in with teamviewer to walk me thru the procedure. he said the pop up was working on his end, and that I ran the adaptation just fine.

what do I need to check to correct this? [redacted] is the license # I have. also, I get a communication error when trying to access NAV and Radio but my other scanner will get right in. I can watch the screen on the radio go into DIAG with VCDS, and it will get as far as a radio p/n before it aborts.

Yes, an Auto-Scan and some screen-shots illustrating the problem would probably be useful.

Uwe said:
Yes, an Auto-Scan and some screen-shots illustrating the problem would probably be useful.

pay no attention to the codes in the engine controller...I was playing around causing issues just to play with VCDS

you can see the radio and nav have excessive comm issues...but I can get in using other scanners

here is where the login "bombs" with the pop up that says the controller accepted log in: 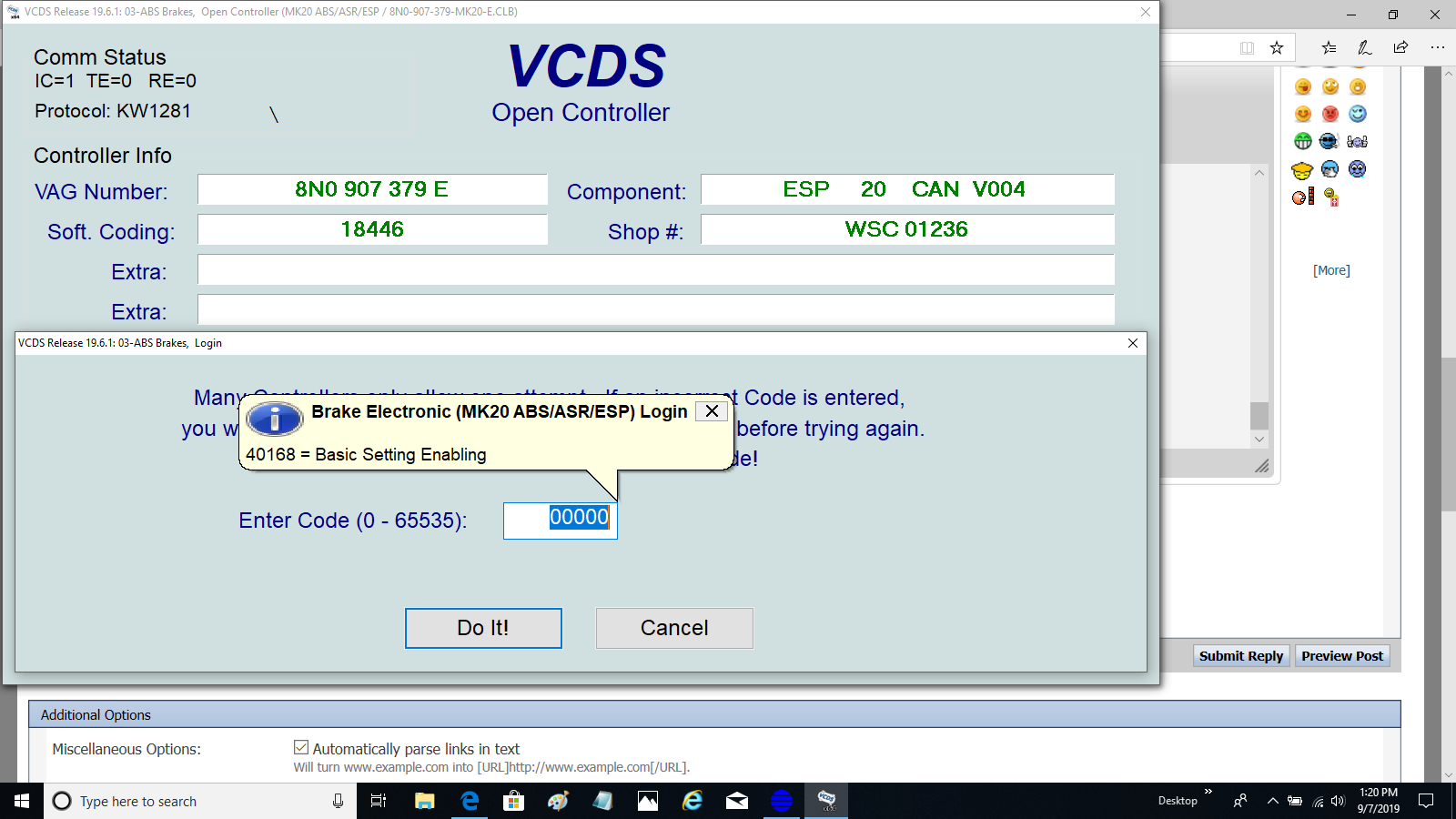 not sure what's going on.

in terms of the nav/radio (which oddly still works fine) I am just nosey, and wanted to play around. I am not chasing an issue....yet

vwparts said:
I can type in 40168, hit "do it!" and it just blinks and goes away, never telling me if it accepted the code or not.
Click to expand...

Ok, that's normal. When talking to a control module that uses the old KW1281 protocol (which this one does), there is no explicit acknowledgement from the module that a login was accepted. There can be a semi-explicit rejection in the form of an generic error in the next packet from the module, but most of the modules in using this protocol don't even do that; they just "hang up" the session. VCDS will then re-start a new session with the module and since it knows you tried a login, it will put a warning in one corner of the scree with the wording "Login lost due to dropped session" (or something very close to that).

As for the errors in the radio and nav (which are the same module, responding to two different addresses), what happens if you access them directly?

Uwe said:
As for the errors in the radio and nav (which are the same module, responding to two different addresses), what happens if you access them directly?

if I do an auto scan and the radio is on, I will hear it cut out, it will try to get read...the radio will display "DIAG" and the fields will populate VAG # and component...then it will bomb. sometimes, it will only display VAG # and never get to component. happens radio on or off.

same thing happens if trying to do a log in with either NAV or radio.

last time I tried it, it went into diag on the screen and failed the same way. however, upon exiting the module the next key cycle all I had was radio static, could not use any of the buttons except for seek and the radio display was "frozen" in the cluster...radio on or off. hitting seek did nothing except "slot machine" the stations, and never stopped...it was like the antenna was disconnected.

the only way I got the radio back was to pull the fuse, re enter the radio code and it all came back to life.

That's quite strange/unique, and I'm not sure what's up with that.

What model year is this car?

like I said, not chasing any issues, I just wanted to "play" now that i'm a hack with VCDS and enough curiosity to get me in trouble

here is a screenshot of how far it will go. this is the farthest I have been able to get. sometimes it won't even populate the "radio" in the component field, just the p/n 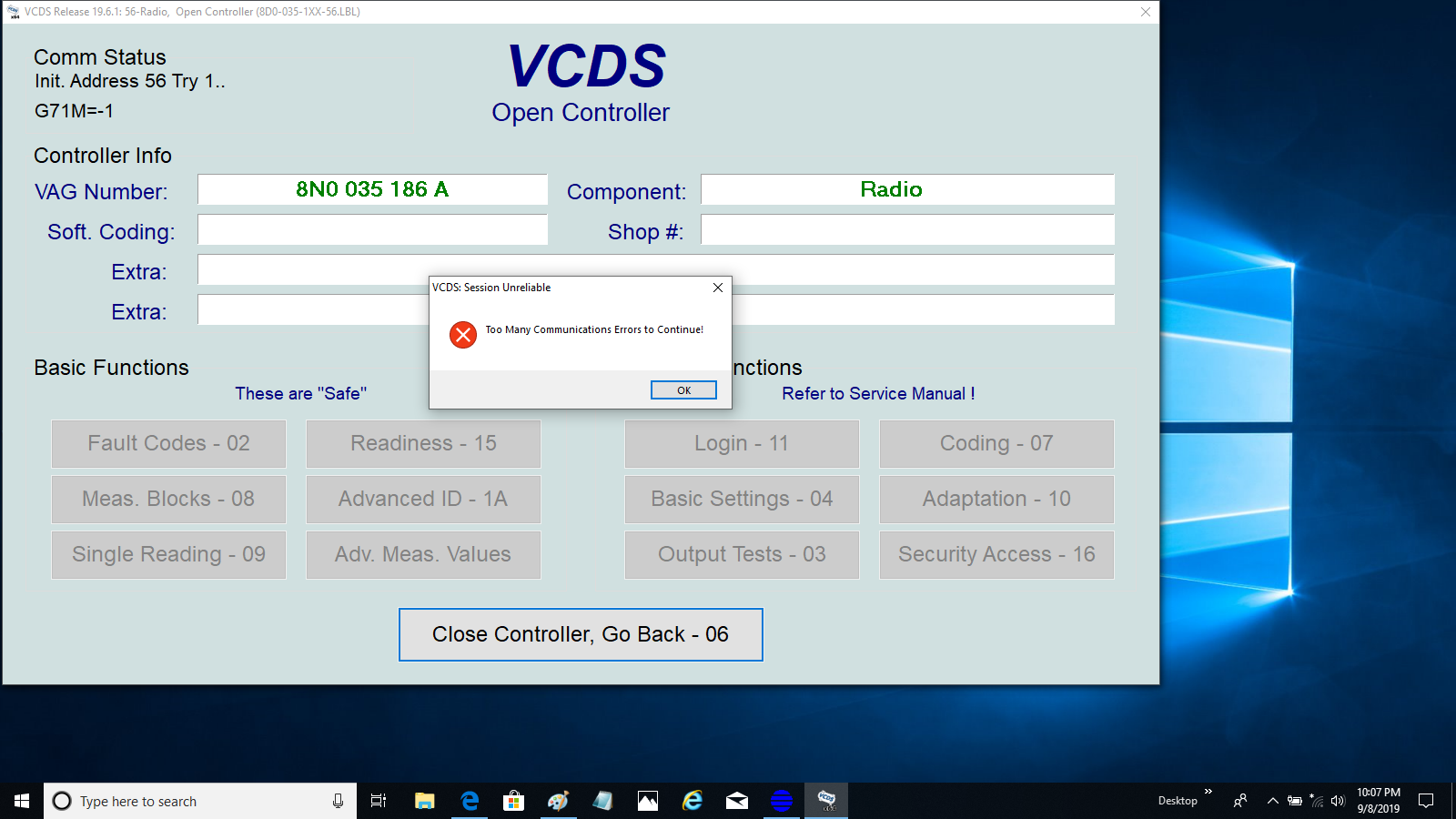 just wanted to bump this up and see if there was any update. I understand you're busy and honestly would be surprised if you put any effort into a 01 audi haha
You must log in or register to reply here.
Share:
Share Link
Top