"... maybe the most important speech I’ve ever made." So, I made myself watch it. It wasn't pleasant. Let's set aside the nebulous fantasizing and just focus on a few of the testable and verifiable claims, in the order in which they appear.

"67 counties in Michigan" with more registered voters than voting age residents: This is from the Russell Ramsland affadavit that already got torn apart in mid-November, because he confused precincts in Michigan with those in Minnesota. Even Trump supporters found that one too hard to choke down. The only thing that tops an embarrassing own-goal like this is to put the exact same thing out there AGAIN, two weeks later, standing at a podium with the seal of the President of the United States.

"in Wisconsin, the State's Board of Elections could not confirm the residency of more than 100,000 people, but repeatedly refused to remove those names from its voter rolls": This is the one where Wisconsin was indeed going to do list maintenance, but due to bad experiences with data from their last round, they were going to do the purge in 2021. To give you a sense of just how garbage that data was, when the Republican suit asked for every member of the Board of Elections to be personally held in contempt and fined for not emergency-purging 209,000 voters from the rolls, by the time it made its way through the court system, the list was already down to 129,000 voters with no other action. And when someone actually looked at that pared-down still-garbage list (see page 6 for a good summary) it turned out at least 26% of the people on that list hadn't even moved, and at least another 38% of them had moved but stayed within the county, and according to both Wisconsin and Federal law, should not and could not be purged.

"Wisconsin, we're leading by a lot, and then at 3:42 in the morning, there was this. It was a massive dump of votes, mostly Biden, almost all Biden, and to this day everyone's trying to figure out, where did it come from?": Absolutely nobody is trying to figure out where those votes came from. Everyone was getting live updates that night, broken down by county or even precinct as counting proceeded, and you can see exactly what was recorded where and when. They came from absentee votes in Milwaukee. I know that's not enough, so here's pictures of the election official copying the tabulation results onto encrypted USB drives, being driven in a Milwaukee Police car down to the county courthouse, and hand-delivering them to be included in the official results, all timestamped after 3AM that morning. As for why they're mostly Biden, consider the possibility that absentee voters residing in the City of Milwaukee don't much care for Trump.

"... and that includes votes that went through when they weren't allowed to be seen by Republican poll watchers": Lots of handwaving here to avoid stating a claim that can be tested and falsified, but something like this actually made it to court in a couple places, so I'll let CBS News and Reuters dispense with it. Suffice it to say, there were hundreds of Republican poll watchers, not all of which were a credit to their party in terms of understanding the process and understanding the rules they were expected to observe.

Dominion blah blah blah "6,000 votes had been wrongly switched from Trump to Biden": Human error. Noticed immediately, fixed immediately. It's a great example of when a result actually DOES look wrong, how we can go back and (dare I say?) audit the work and figure out what if anything went wrong.

"... where are the votes counted, which we think are counted in foreign countries, not in the United States ...": I don't even know how to respond to this.

I made it 11 minutes and 38 seconds into a 46 minute video and I couldn't take it anymore. The above represents maybe 20% of the statements I had a problem with, the other 80% being nonspecific handwavy white-fear dog-whistle noise.

Jack@European_Parts said:
I'm so fucking glad I didn't vote, it's more fun being a spectator!
Click to expand...

I wish you would.

Uwe said:
I'm starting to wish I hadn't either.
Click to expand...

I'm glad you did.

On November 3rd, I do think a very good thing happened for our country, a step forward. It's not something I won, and it's not something you lost, though I know you don't feel that way. I wish there was some way to get rid of DJT without making you feel like you're personally getting stepped on by The Enemy, but that's where he took us and it'll take a long time to bridge that divide.

Disengagement is bad; engagement is good. I don't arrogate to myself knowledge of the One Right Way to run a country. Making a more perfect Union is a messy business. You have input. I have input. It's all important and valid input. It should be heard. There should be consensus on a reasonably minimal role for government in our lives, a relatively high bar to clear before you can tell me how to live my life, or me to tell you how to live yours. Remember the good old days when countrymen could debate policy in good faith? We can do that kind of thing again.
Last edited: Dec 3, 2020
Dec 3, 2020 #863

I don't partake in a function which is pointless, I find other means to stand up for what I believe in and will focus on those matters if possible to do so by using the regulation.

Just like alledged contingency school budget's?.....Why if you vote it down they still get what they want and never a cut, I take issue with it, don't you?

Don't you have a better shot at a specific lawsuit or opposition hearing at purposed regulation, just like reading the Federal register versus trusting any news agency for a spin?

Country is bought and paid for by special interests and it takes money or fear of losing money to get a real say vicariously no?

jyoung8607 said:
On November 3rd, I do think a very good thing happened for our country, a step forward.
Click to expand... 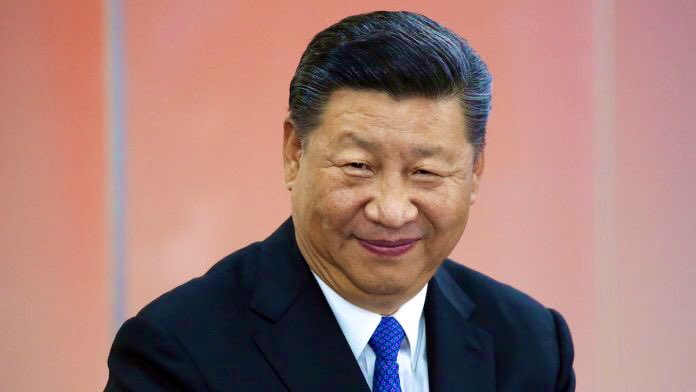 For a minute there I was thinking about how to present a cliffnotes version of the whole proven chain of events, the mountain of actual evidence, the actual legal proceedings carried out by competent professionals, the stack of successful prosecutions and guilty pleas, but then I realized...

That's not what this is about. You're reaching out from somewhere deep inside and trying to communicate. "Russia, Russia, Russia" is the term for BS in your lexicon. And you're putting The Donald's latest antics on that same level. I think we may have come to some weird sort of agreement? Sokath, his eyes open!


And neither one of us had to die. You can keep the tablet if I can keep the dagger. I'll treasure it as a souvenir of this moment.

You are absolutely incorrigible.

jyoung8607 said:
You are absolutely incorrigible.

Federal judges appointed by Republican and Democratic presidents alike have struck down the Trump campaign’s allegations of widespread voter fraud in every case on which they have ruled, according to a Yahoo News review of post-election federal complaints.

The president on Thursday suggested his attorney general has not looked hard enough at purported evidence of voter fraud brought forth by his campaign.

The president on Thursday suggested his attorney general has not looked hard enough at purported evidence of voter fraud brought forth by his campaign.

Someone" open a book" quick

jyoung8607 said:
Remember the good old days when countrymen could debate policy in good faith? We can do that kind of thing again.
Click to expand...

OK. Would you agree that it's terrible policy to hide cases of ballots under a table until after observers have been told "We're gonna stop counting now, go home!" and then start counting them?


Stuff like this really makes people who voted for the candidate that supposedly lost wonder....

Uwe said:
OK. Would you agree that it's terrible policy to hide cases of ballots under a table until after observers have been told "We're gonna stop counting now, go home!" and then start counting them?
Click to expand...


Uwe said:
Stuff like this really makes people who voted for the candidate that supposedly lost wonder....
Click to expand...

If such a thing ever happened, I'd be standing right alongside you and holding a pitchfork of my own. 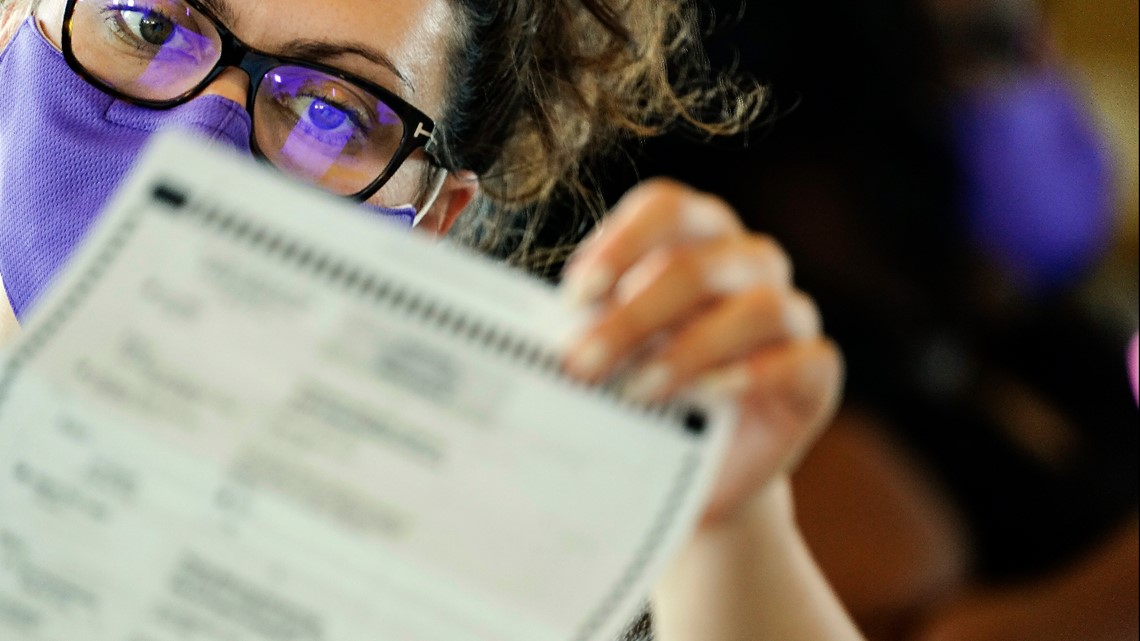 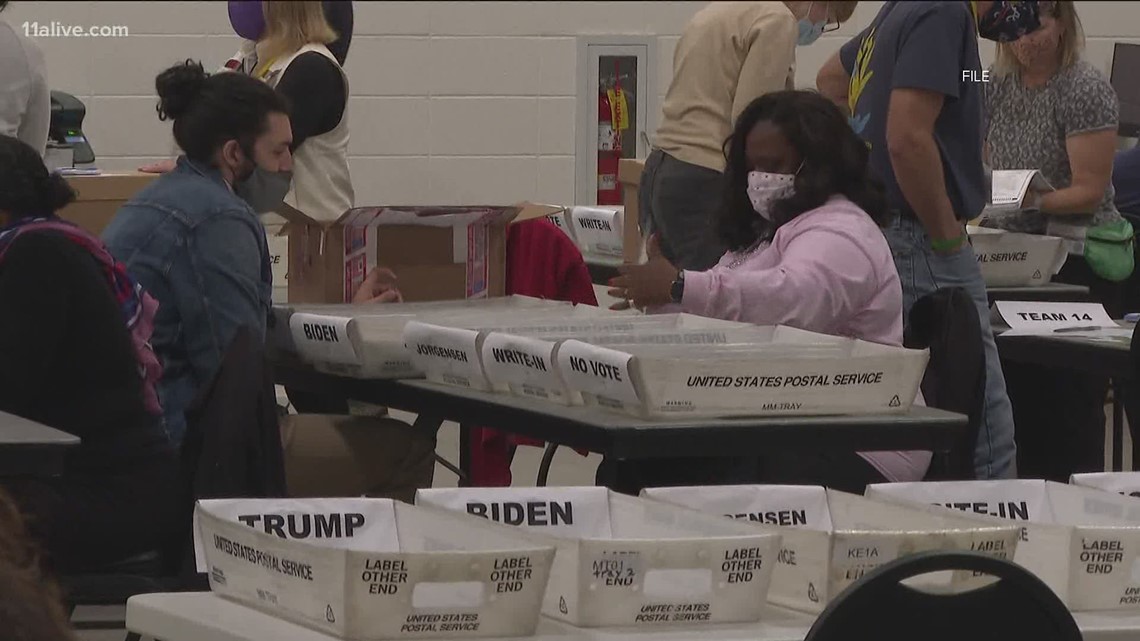 Raffensperger's office sent a news release that said the secretary requested the additional assistance on Friday, and Kemp agreed quickly the same day.

Here's a news story from WSB-TV in Atlanta that came out tonight at 6PM. One of their reporters went to the State Farm Arena with someone from the Republican-controlled Secretary of State's office, and together they went through the original security footage, from all angles, walking through the entire chain of events for the "suspect" boxes. 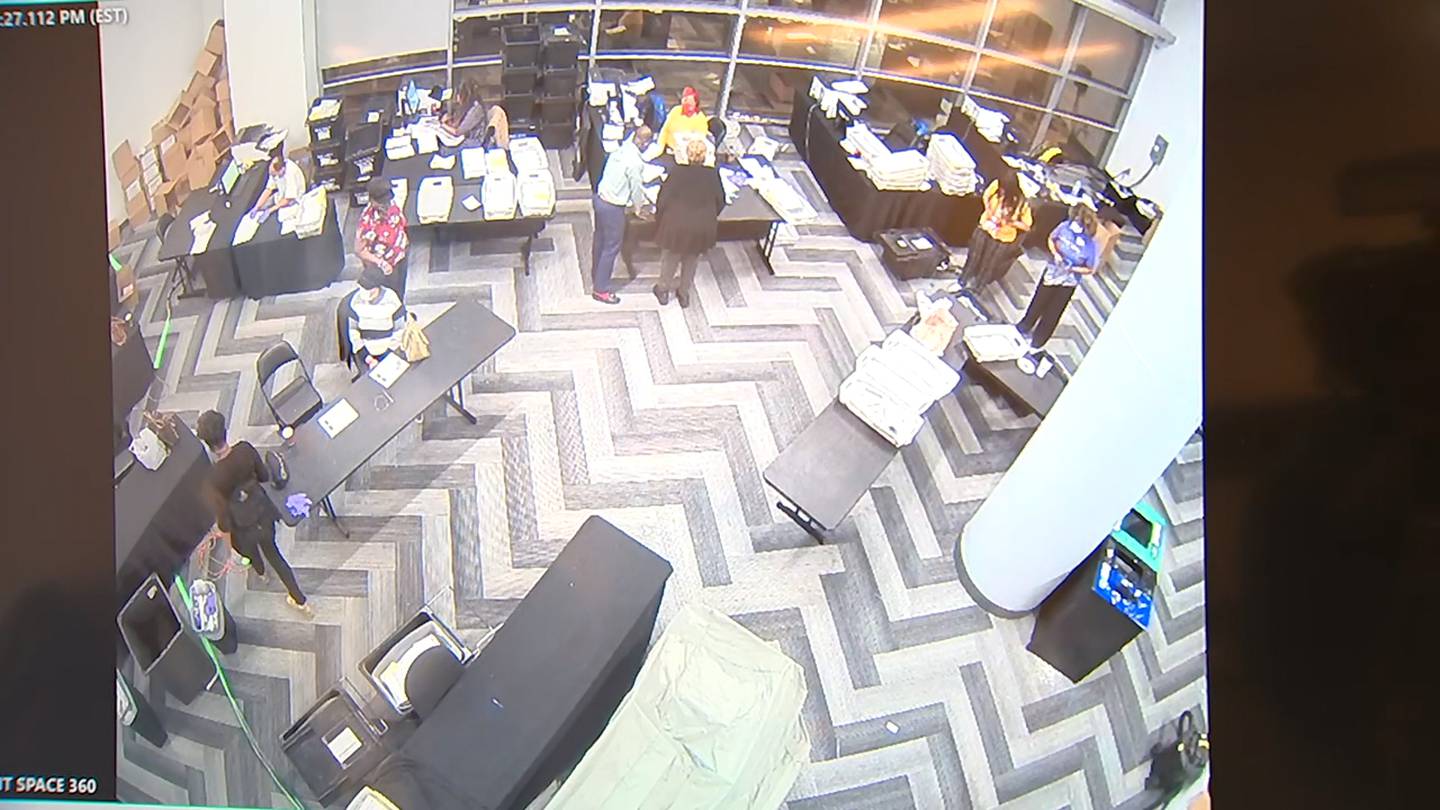 For the third time, counties across Georgia have certified votes from November's presidential election. 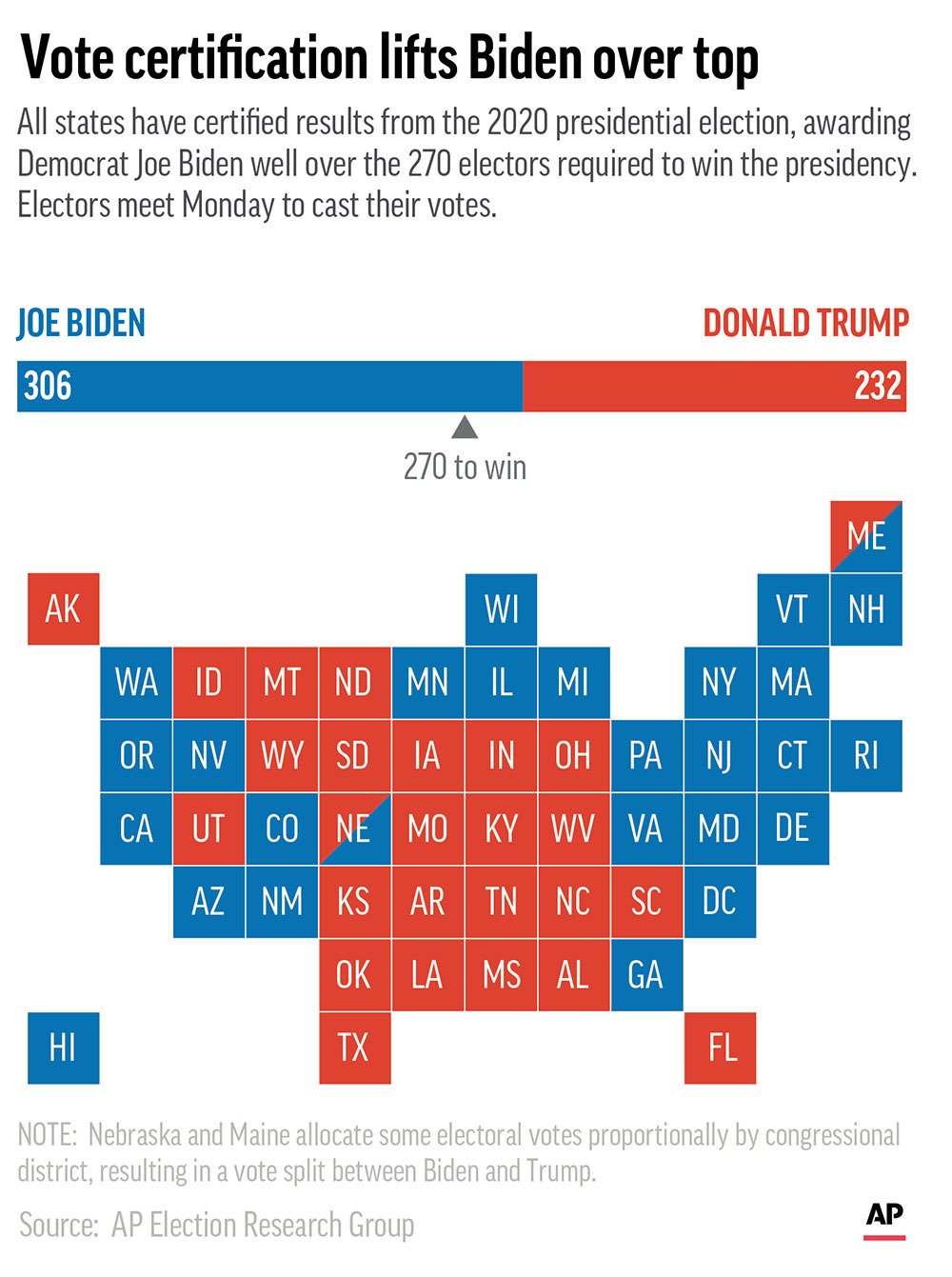 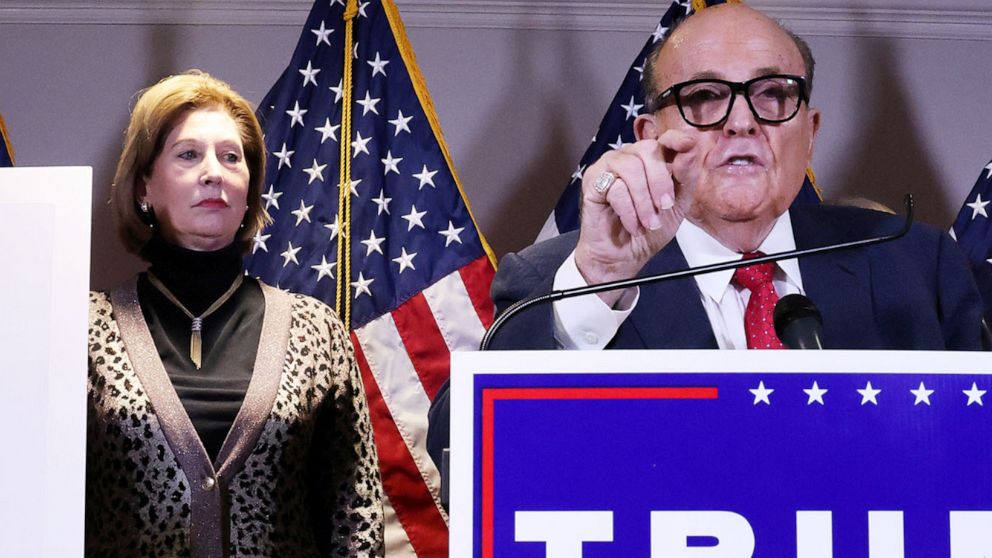 As President Donald Trump and his allies continue to bring legal challenges in an effort to overturn the election, some election officials are starting to cry foul. 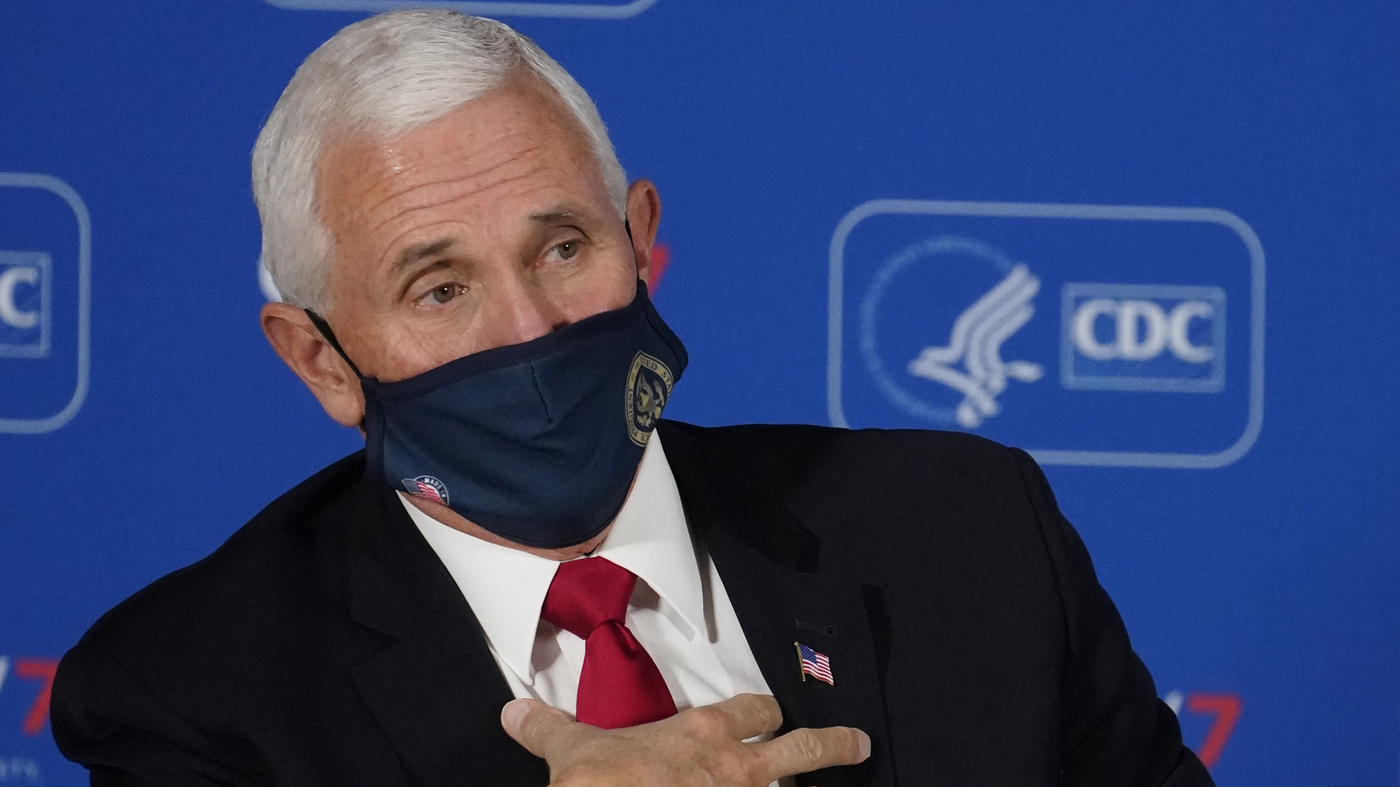 Pence Says It's A 'Season Of Hope,' While CDC Officials Warn Of COVID-19 Surge

Pence visited the Centers For Disease Control and Prevention to highlight promising vaccine developments, but he received a grim assessment of the current state of the pandemic in the U.S. 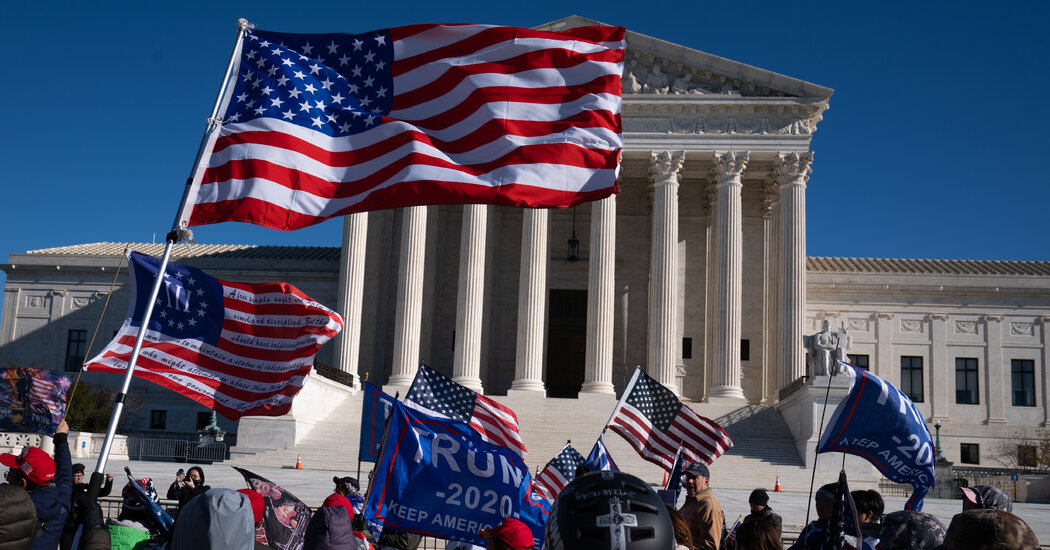 In a one-sentence order, the court refused to overturn election results that had already been certified and submitted. 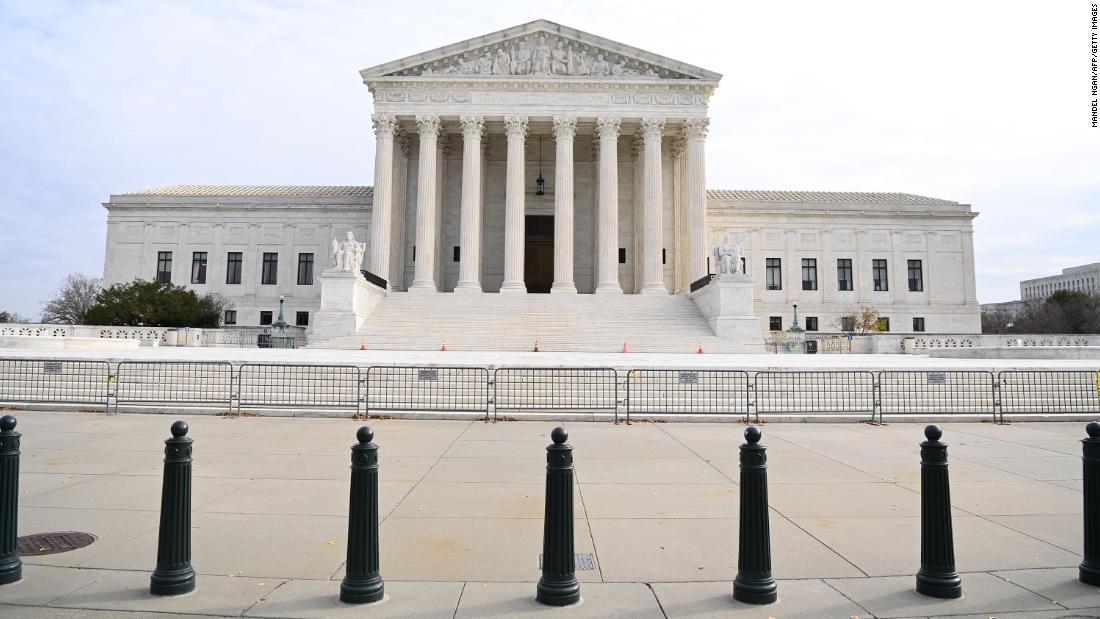 State attorneys general went to battle at the Supreme Court on Thursday, taking sides on President Donald Trump's bid to pull off an unprecedented legal victory that would bring the election to a screeching halt. 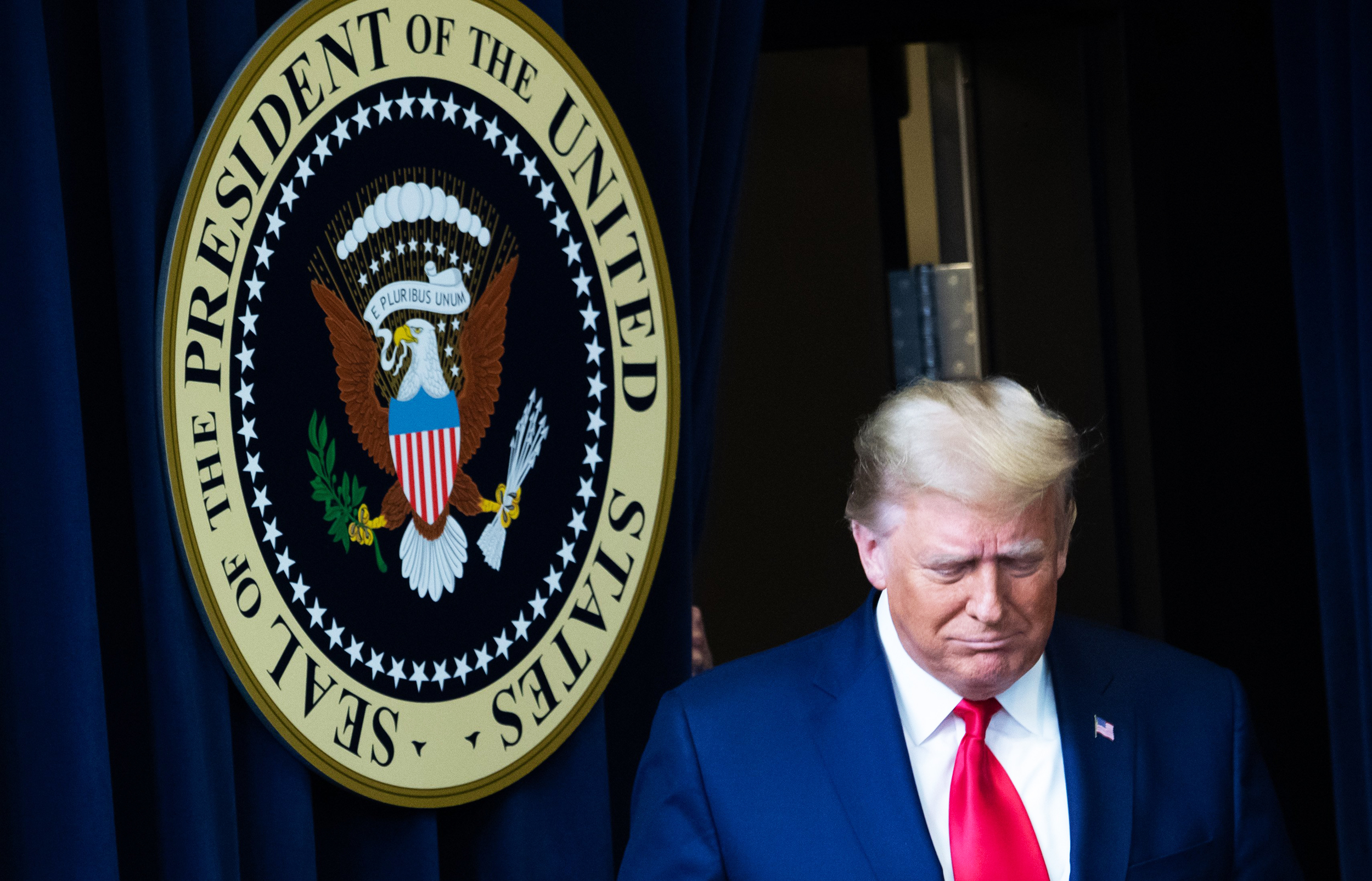 "The Supreme Court has decisively and speedily rejected the latest of Donald Trump and his allies’ attacks on the democratic process," said Biden campaign spokesman Mike Gwin. 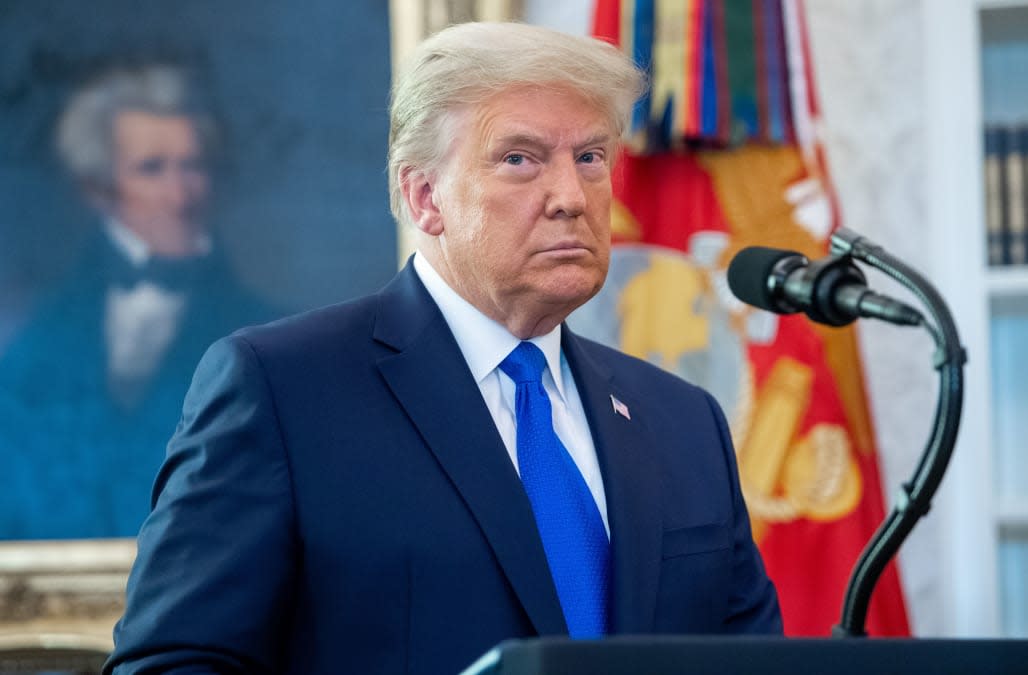 As he rails on election, Trump largely mum on toll of virus

Of Trump's tweets over the past week, 82 percent have been focused on the election and just 7 percent on the virus.