Jef said:
Rules for posting here in the How-To's and Tips section:
...
4 If you did a work on your car and what to share what you learned, it goes in this section.
...
Click to expand...

Thanks Jef, I'll have a go with something I've recently done on my car. When driving, the Auto-Lock (above 10mph) and subsequent 'Locked' lamp in the door switch wasn't working. The fault can manefest itself on any one of the doors; and I've experienced it on all four of mine. A greater annoyance is being unable to open the door from the outside handle. An example of the code thrown:


Code:
This occurs because the actuator mechanism, ultimately the motor, doesn't complete its travel. You'll find out why as we go along. So, I dug into the door by RTFM to release the prize: 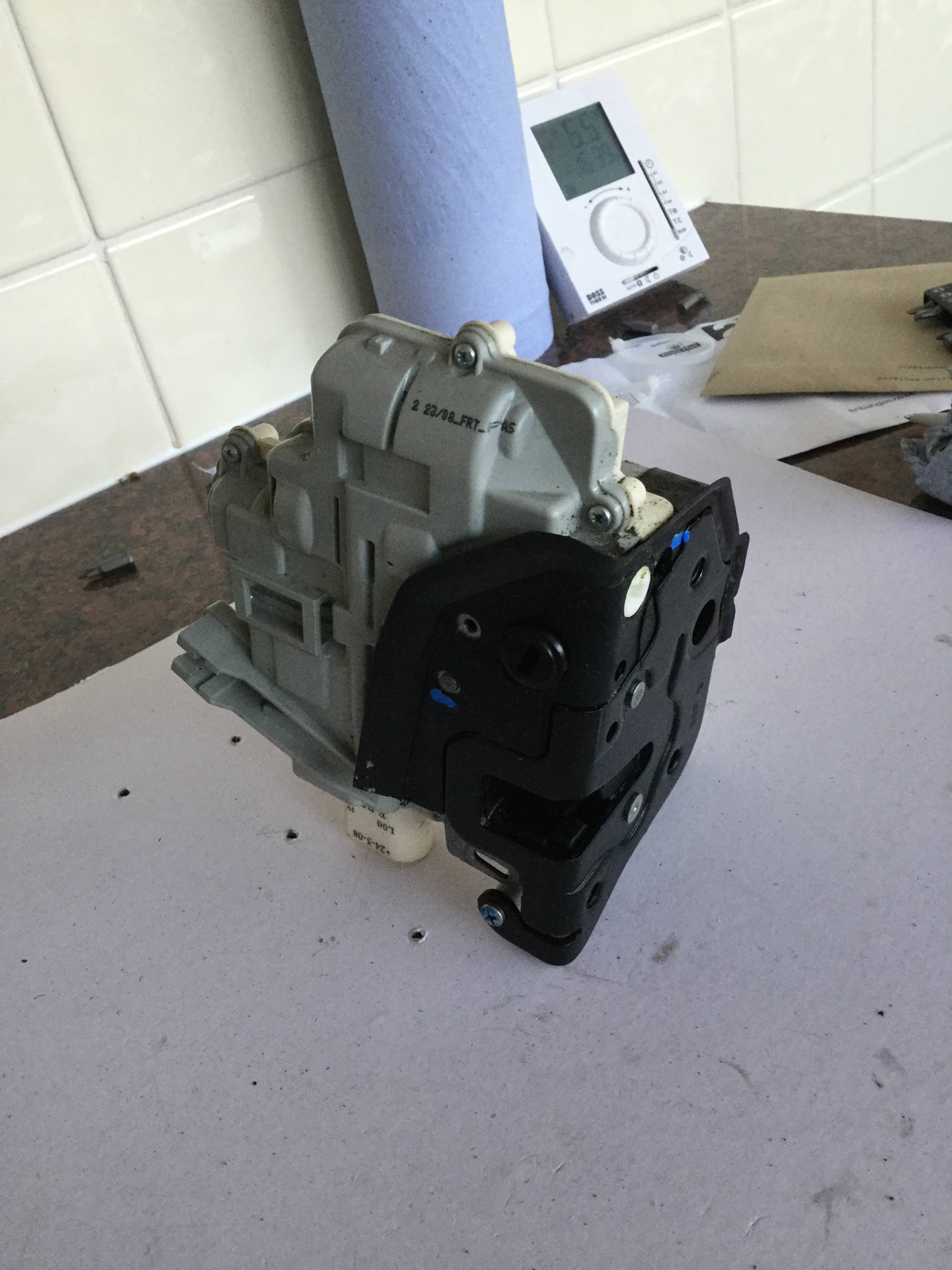 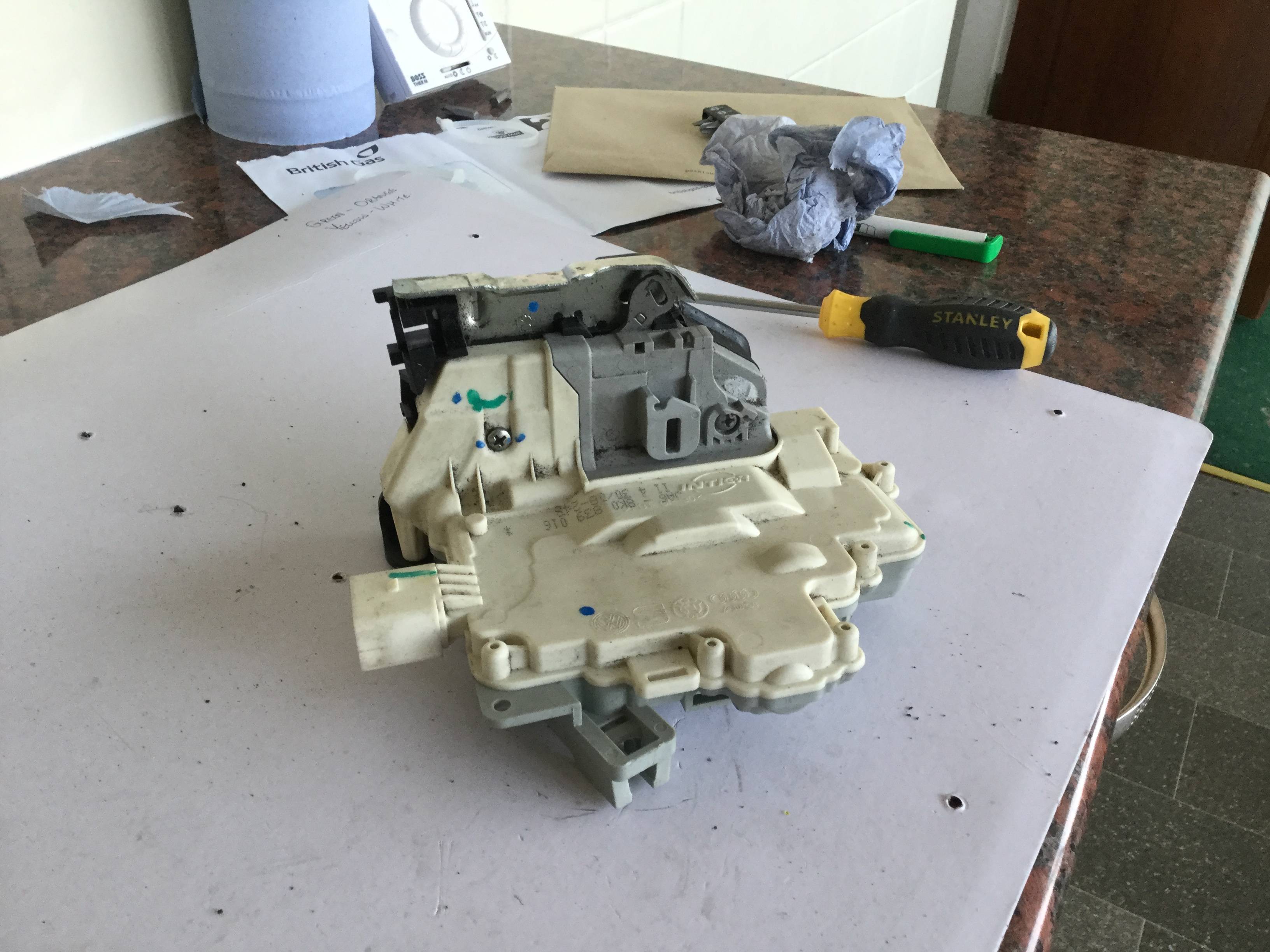 From this point on, it gets quite delicate and fiddly; if you don't have the dexterity or your fingers are of the sausage variety, I'd back away now... : 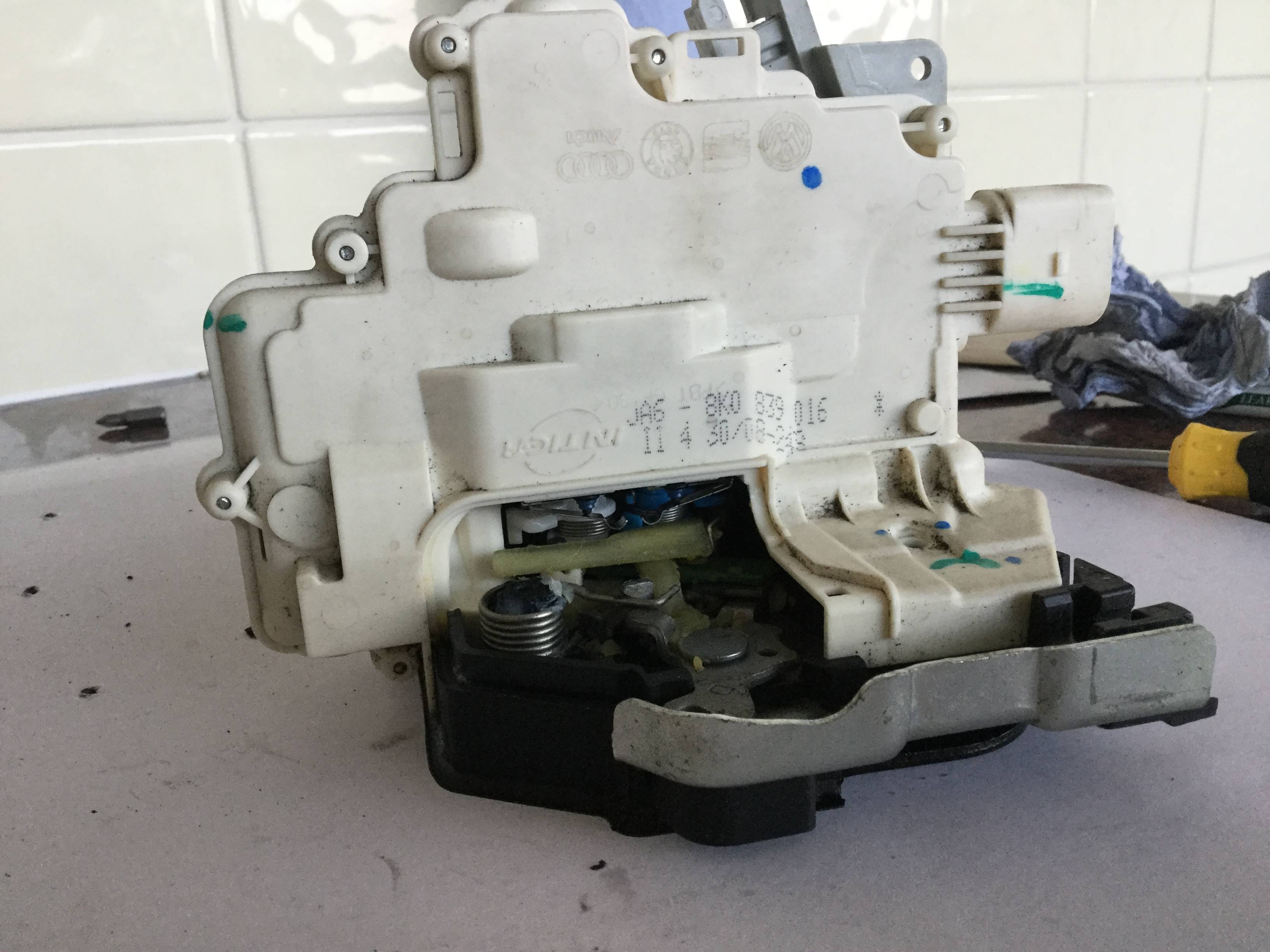 Still with it? OK. With gentle finger pressure only, move the relay lever back about 45° - it'll hold itself on the spring hardware. We're looking at the white and blue eccentrics together with the attached green and neutral relay levers attached: 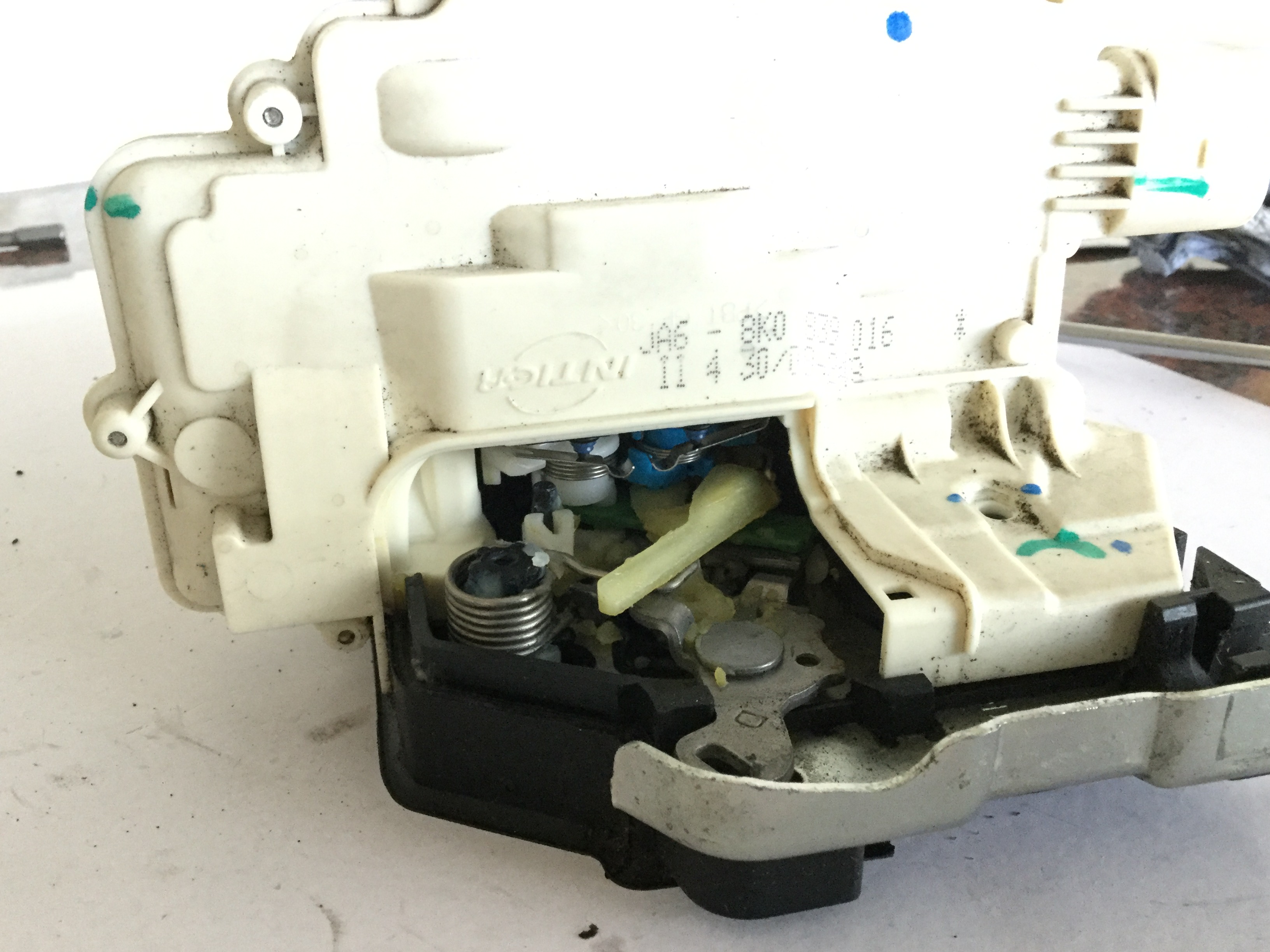 So to split the halves of the door lock, we need to remove the other three screws that are the same size as the one holding the access door on, then disconnect the green and neutral relay levers from the eccentrics. No matter how tempting, don't just pull the two halves apart!! Holding the first relay lever at 45°, reach in with a long thin terminal screwdriver and gently pry the lever from the eccentric. GENTLY!! When your heart returns to a normal pace, you should have achieved separation: 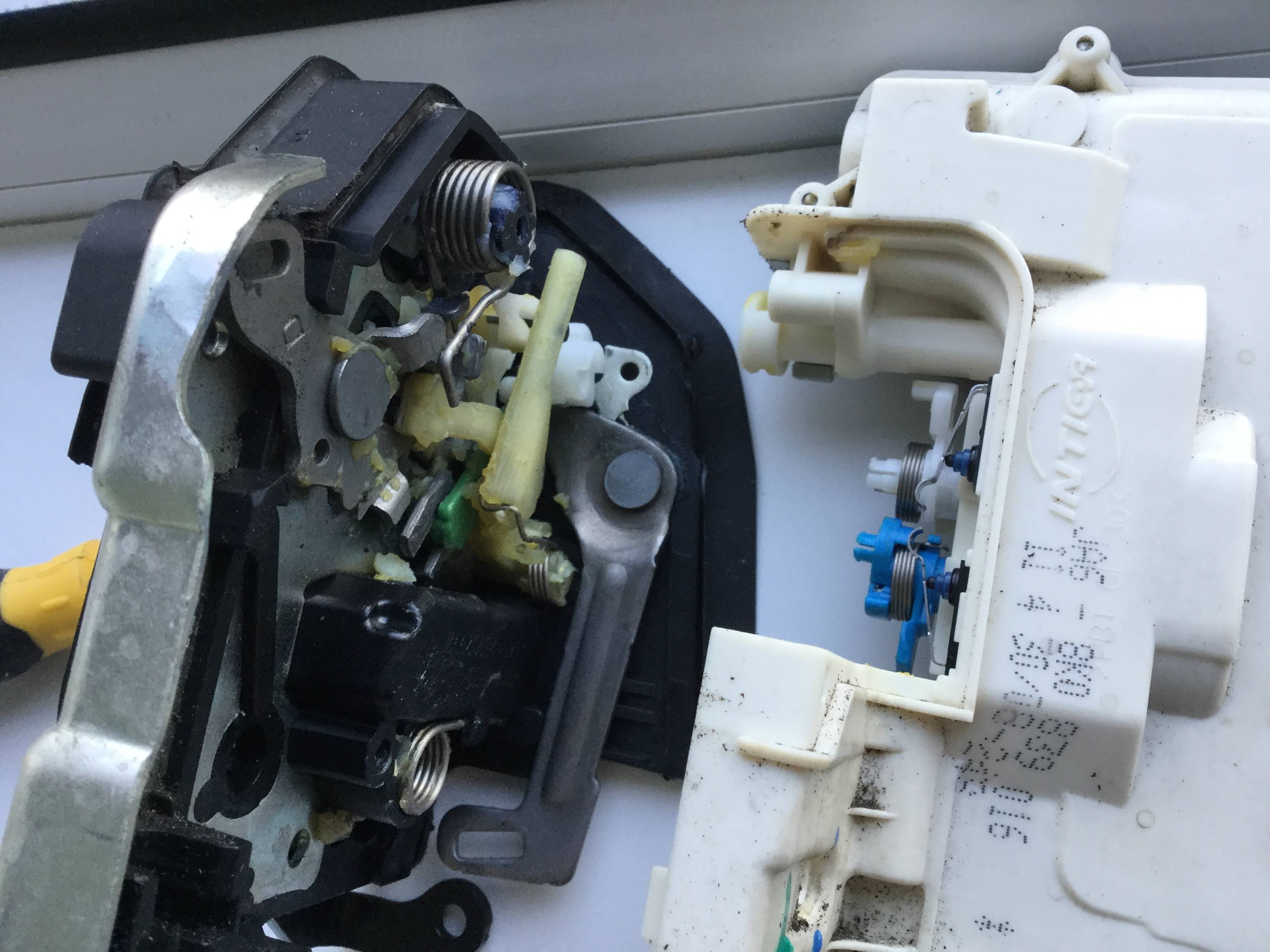 Remove the eight small screws from the motor housing: 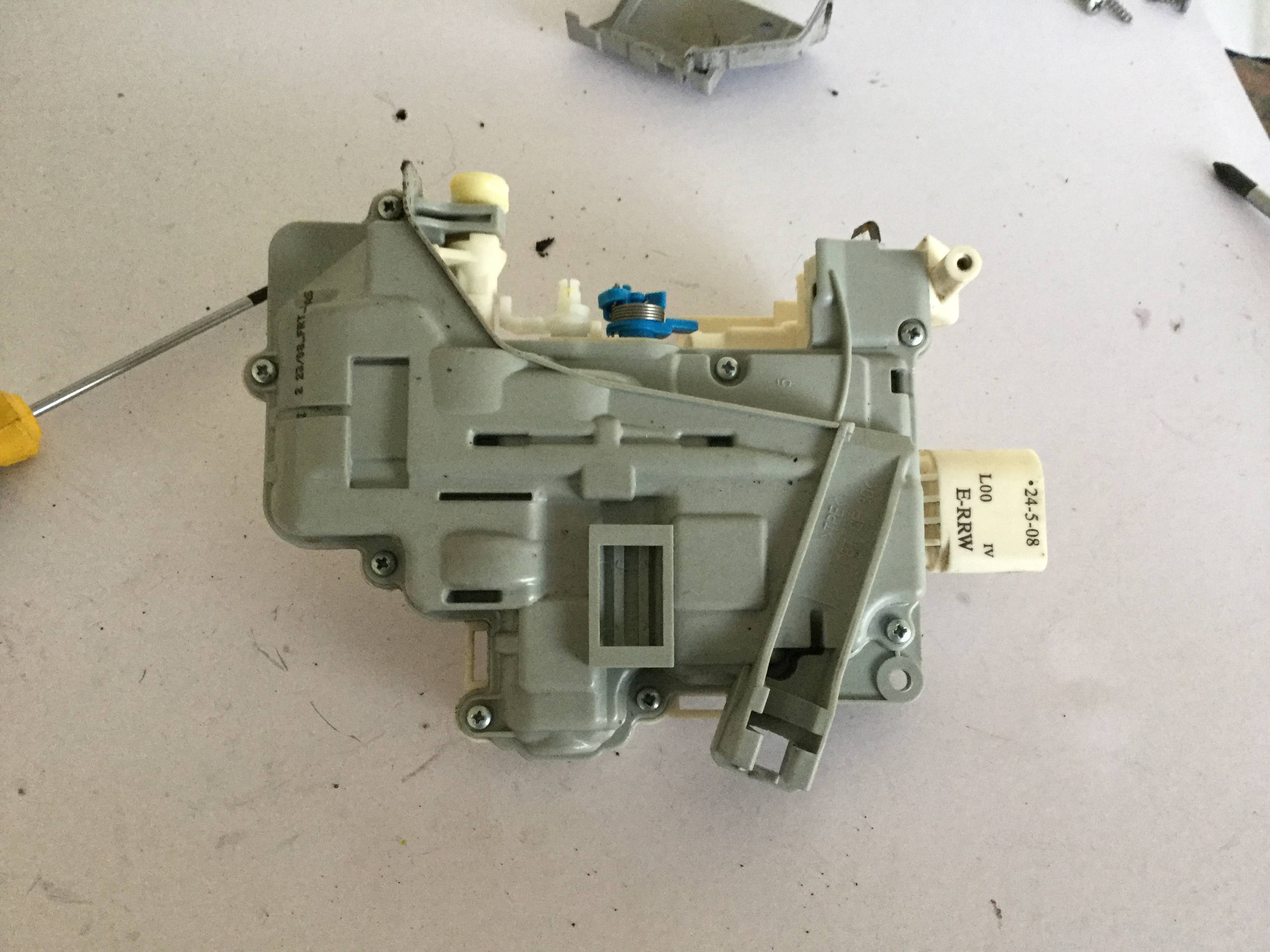 Then gently pry the housing apart. The gasket wants to stick to both halves, so follow round with your terminal driver and push it back into the predominant half: 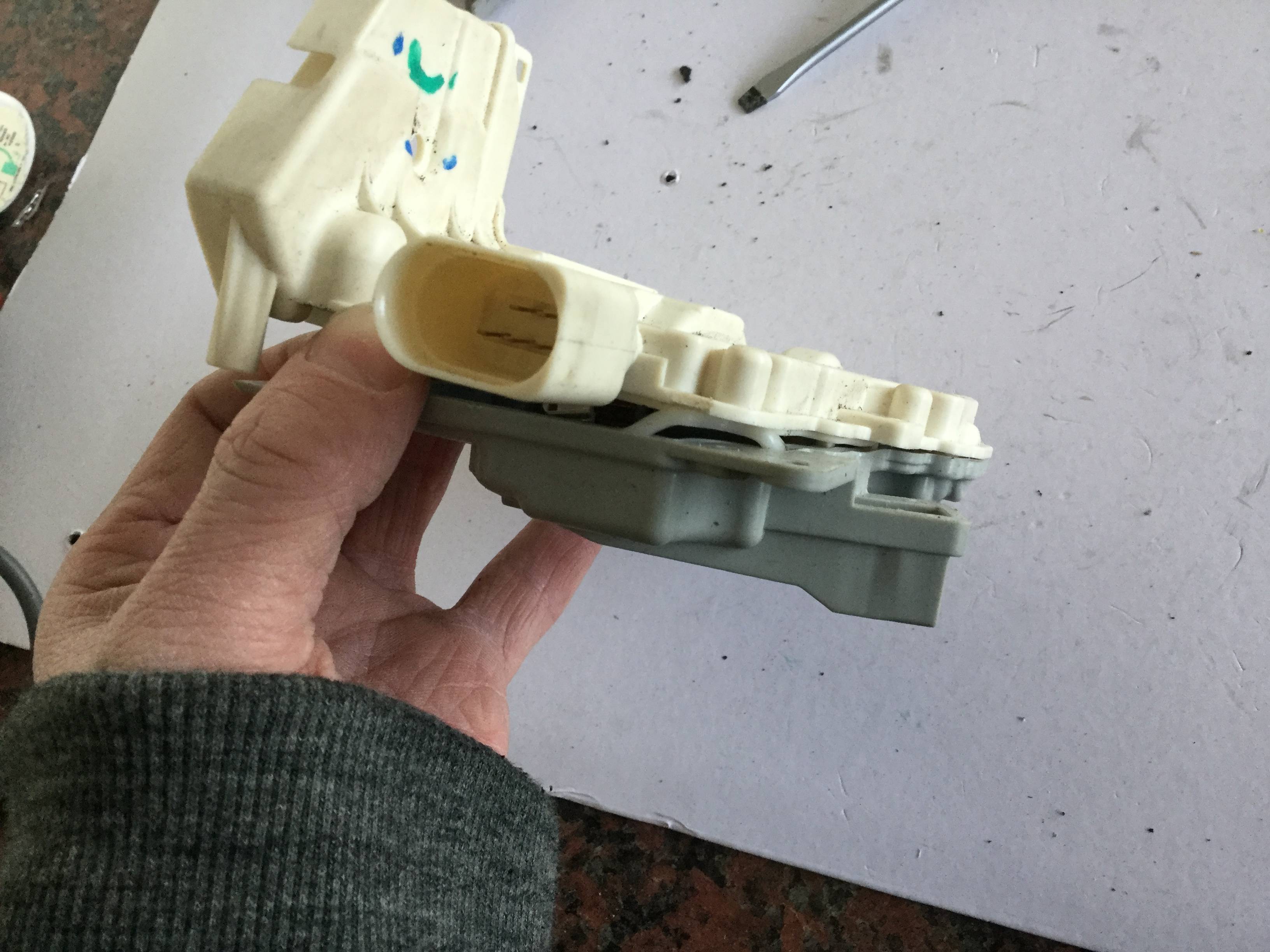 We're in!! USA models just have the one motor; but I think pretty much the RoW have two. The larger motor locks/unlocks the outer handle and the smaller is the 'SAFE' motor that locks the inner door handles. For USA folk, a method of unauthorised entry into the vehicle is popping a window or using a thin strap through the door seal, to fish for the handle and pull it. SAFE prevents this, but unfortunately VW/AoA were frightened of lawsuits of people getting locked in the car: 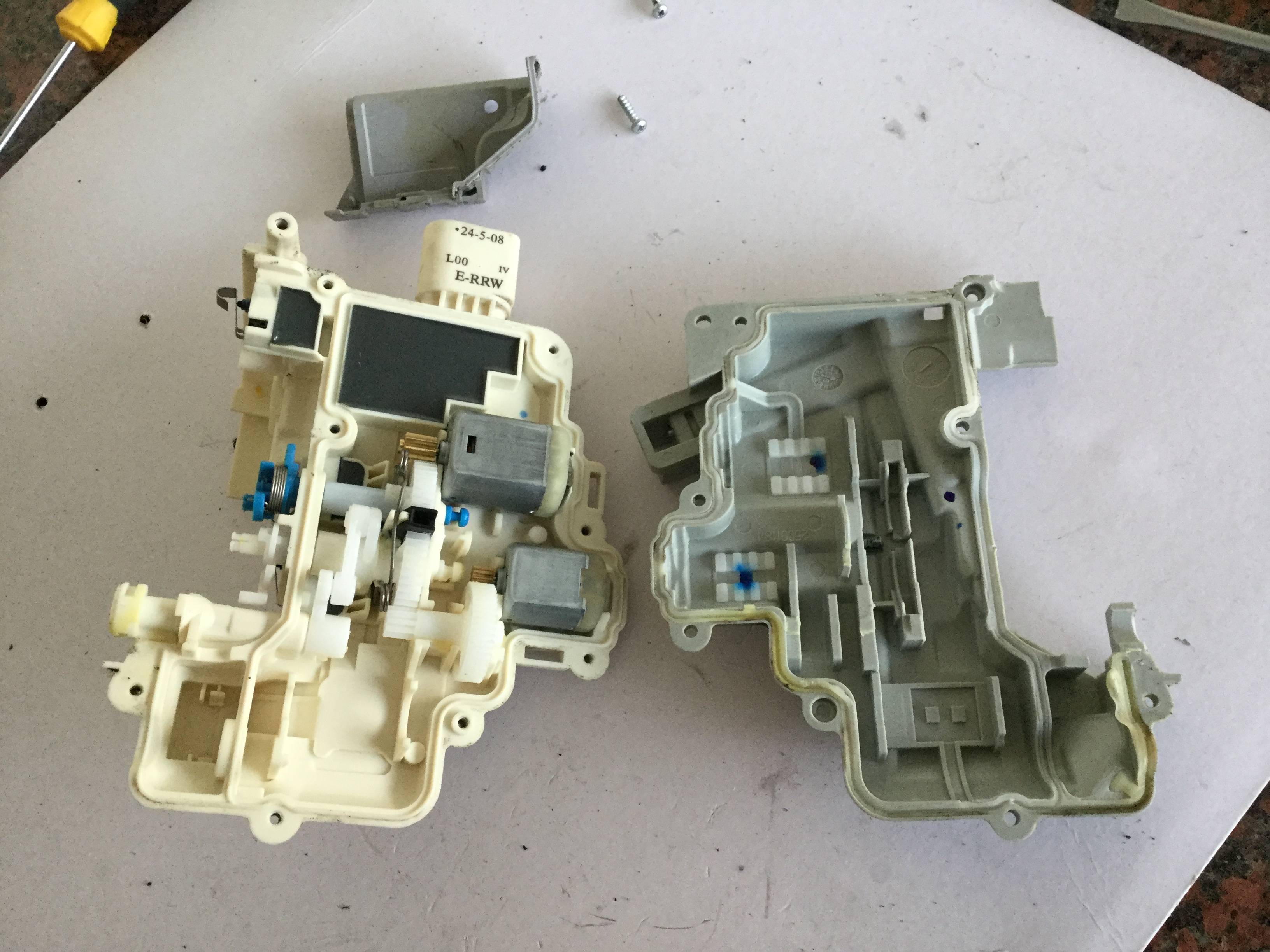 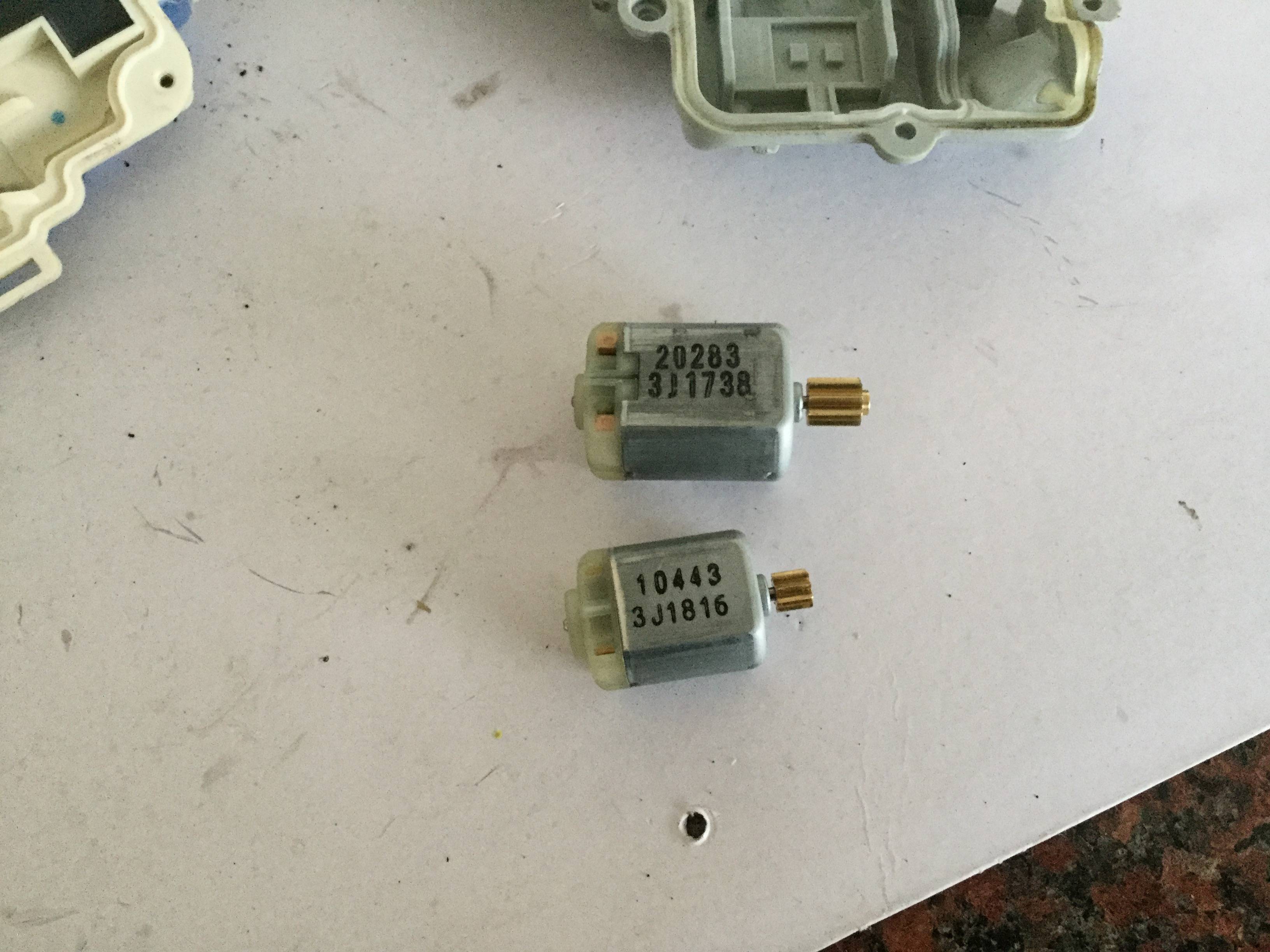 Notice I've removed the Lock motor. The motor is driven by a timed pulse, not to a stall or any form of limit switches. The microswitches are for overall lock status feedback only. Counting the active teeth on the quadrant cog, we get about seven or eight in use. Guess how may are on the cog of the motor...

So stupidly, really stupidly, in use, the motor never completes a full turn. Carbon and other debris build up on the commutator so bit by bit, it turns slightly less of its full turn, eventually the door lock is not released and the microswitch doesn't get activated and the plausibility code is thrown: 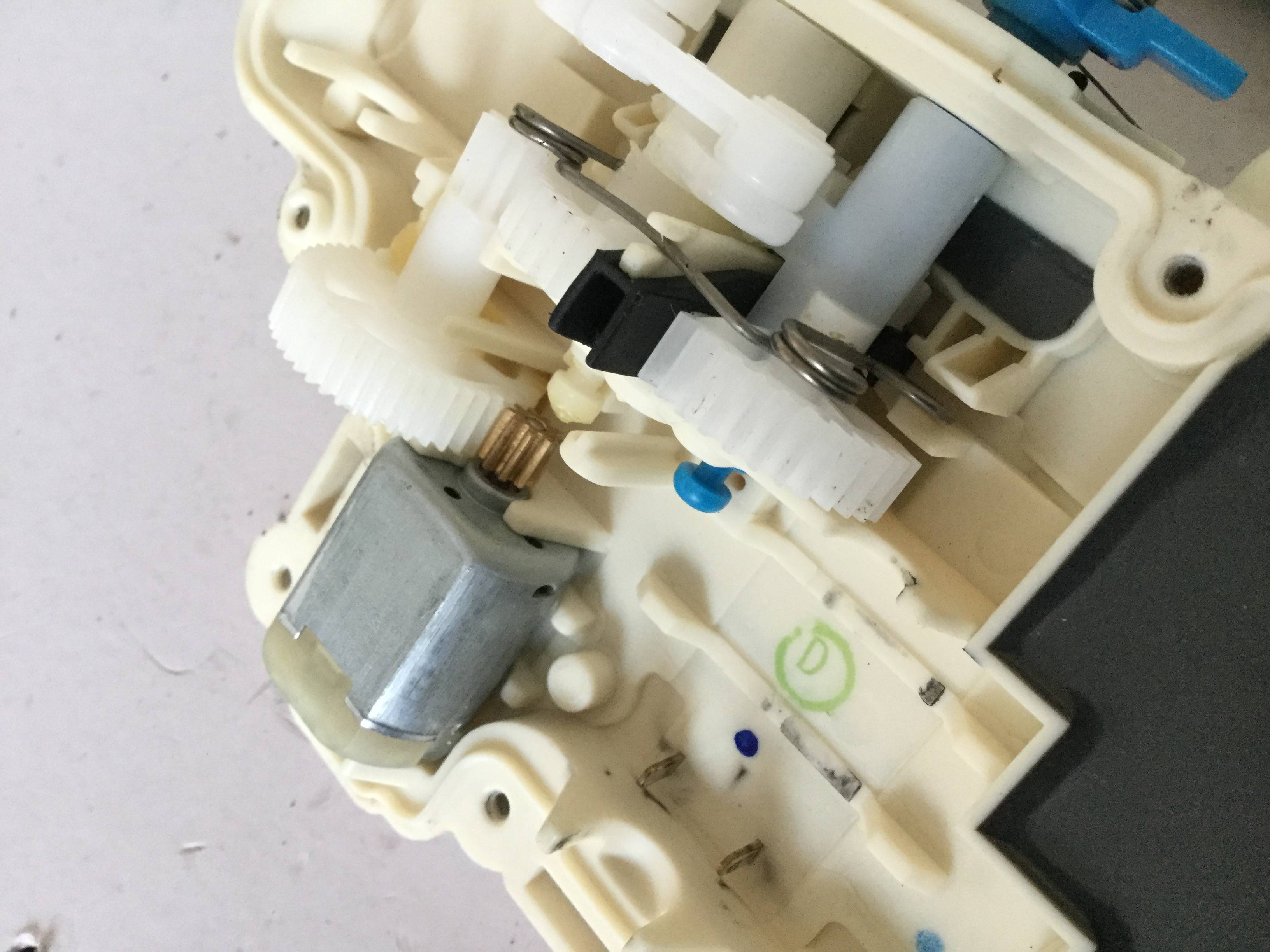 With the motor out, now is the time to put an ever-so-slight bend on to the motor contacts. The Lock motors need a bend outwards, the SAFE motor contacts inwards. Also please note that the SAFE motor has reduction gearing - I didn't count, but it spins many turns to work. It always seems to work too, and so by releasing the inner handle, you can pull that once to allow someone to use the outer handle subsequently.

Give the commutator a squirt of isopropyl alcohol then connect to 12V and let it spin for a good few minutes. Flush again with IPA and air dry. When all of the IPA has evaporated, give each end of the shaft a drop of lube. I use a PTFE 'dry' lube to not attract dust: 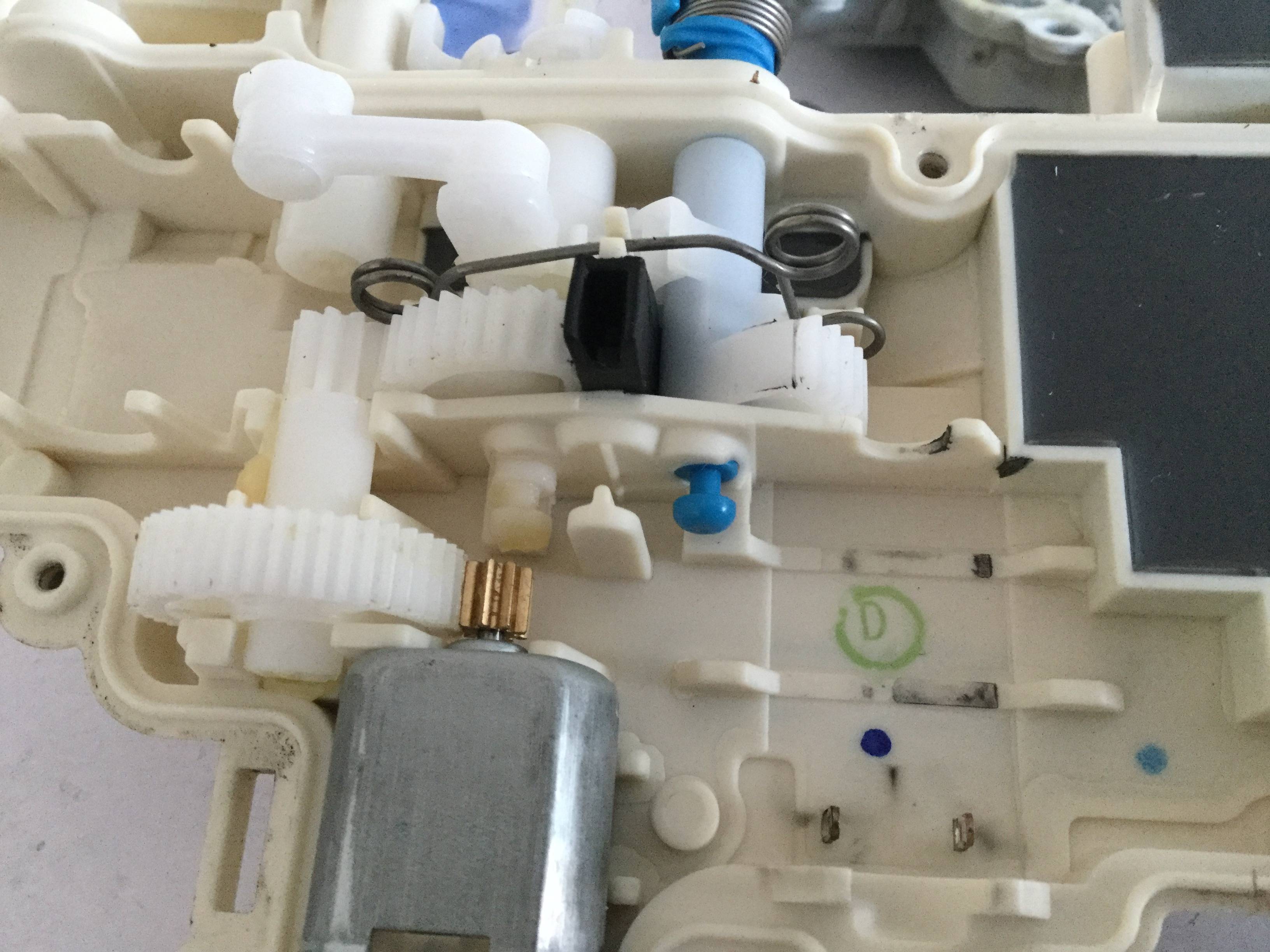 Reassembly.
My white eccentric had separated on removal, this photo shows the spring orientation. Although, sorry, it doesn't. It's a polar bear on snow. Sorry, a Polo mint on a pillow. (I'm not going to dismantle again just to get another picture): 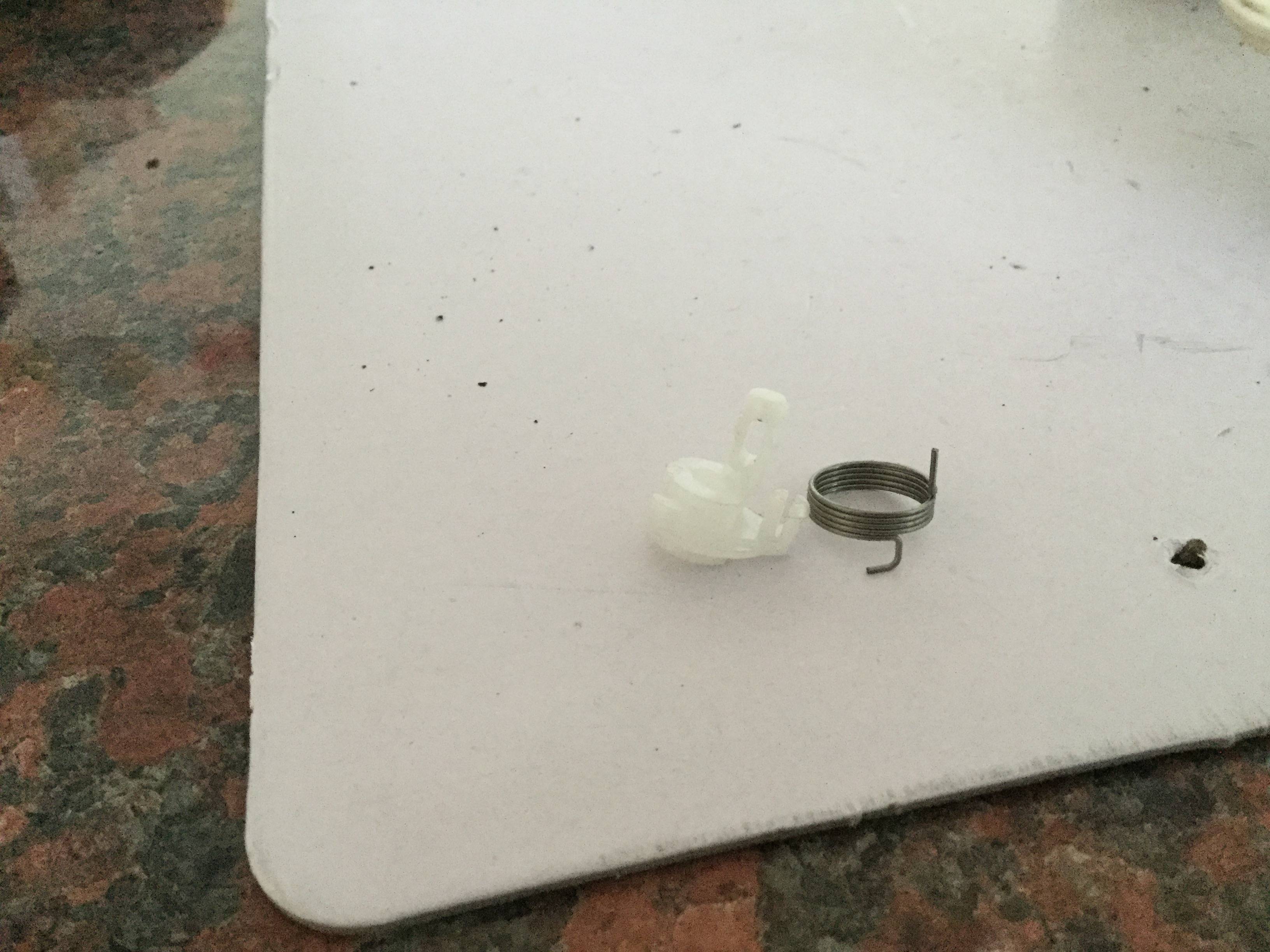 The spring hooks around the eccentric; then the other bit hooks the spring, turns through 90° and clicks in. You'll see for yourself if this happens to you: 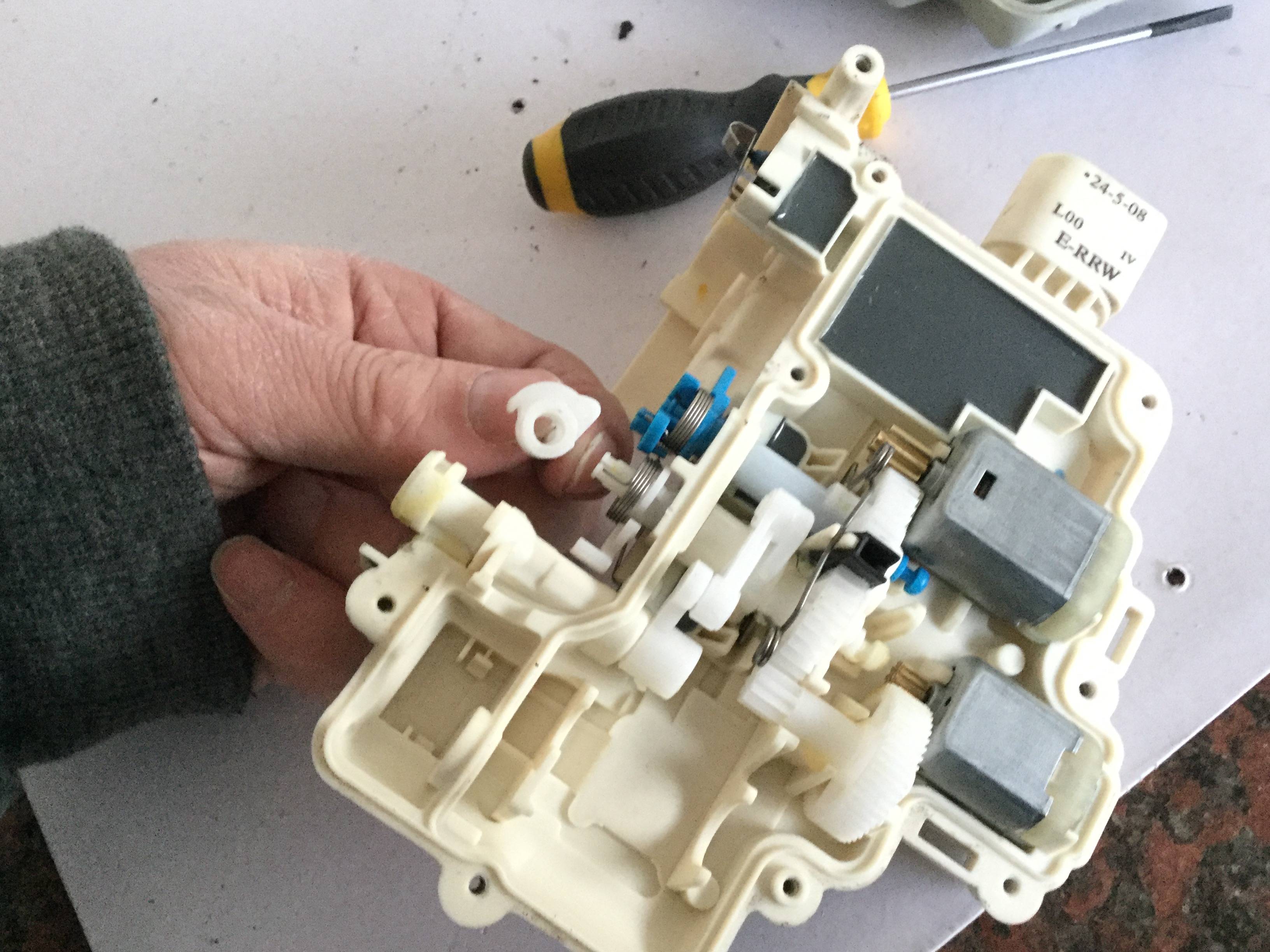 There. Ready for assembling back to the mechanical part. It is best to do this in the unlocked position. When offering up, the two halves of the assembly are held with moderate pressure as you 'pop' the actuating levers back on to the eccentrics: 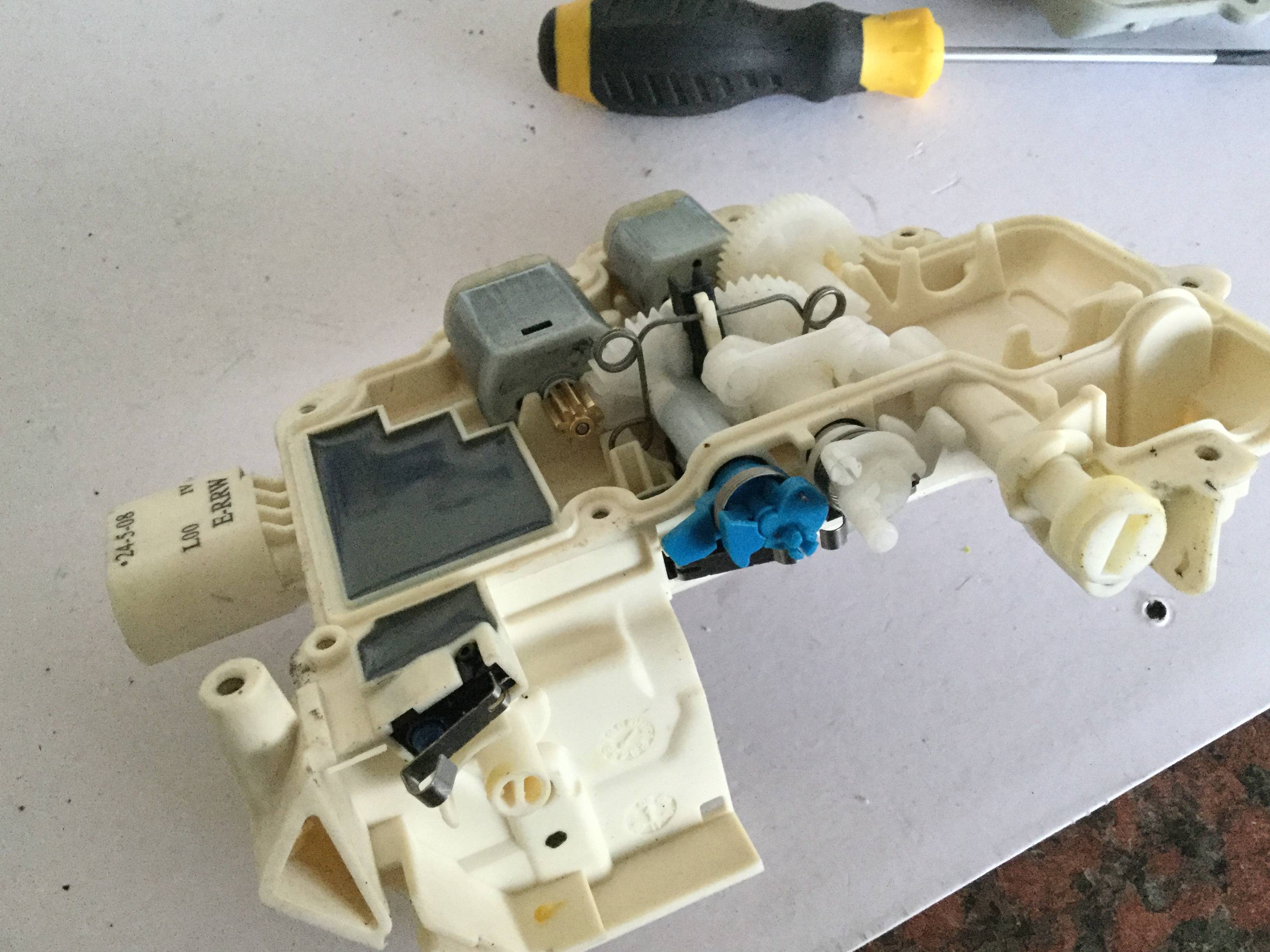 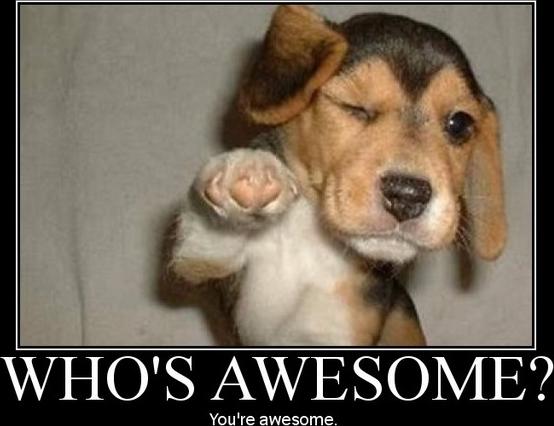