Wow, those are dangerous stocks to try to jump on... sub-penny. I mean as a general rule, OTC pennies are a dangerous place to dabble... even moreso those that are sub-penny.

'Rumors' start circulating that so and so is going to buy that ticker, do a 'reverse-merger' or turn the dead ticker into a SPAC, and people want to jump on it while it's still a fraction of a penny whether or not the rumor is true. Or, it's just a bunch of people purely playing pump and dump.

Most brokers won't even let you put money on those stocks for a reason... At least the non-current ones. Caveat Emptor.

I will say I do understand the attraction... IF you get on one early enough that does genuinely take off because it's actually not a total trash company like most OTC pennies, the multiplicative effect of your investment from being a fraction of a penny to even getting to worth a couple cents is actually quite large... let alone making it all the way to a whole dollar.

If you want a good, semi-recent example of this, look up TSNPD. It was TSNP, a defunct tile company called Tesoro Enterprises. A Fintech company called Humbl took it over as a reverse-merger as a cheap way to get themselves listed instead of doing an IPO, have filed for a ticker change as well, it ran from fraction of a penny to above a dollar in a hurry... If you were on that train early, you made a lot of money...

But the OTC is filled with wild rumors like that, 99% of which don't turn out like TSNP->HMBL. They shoot up on the rumor, then the price selloff is sometimes just as rapid... and the bottom is very, very low for these stocks... as in hundredths of a penny low. Generally speaking, if you buy while it's spiking up, you're almost certainly too late to the party and it will likely blow up your account quickly if you buy at that moment. You have to be pretty dang deep into watching that market for filings, news and rumors for it to actually pay off. Very easy to get burned.

US economy poised to grow more than previously thought due to stimulus, fast vaccine rollout

The OECD expects the gross domestic product in the U.S. to grow 6.5% year over year, up from 3.2% in annual growth it forecast in December.

^^^^ Jack: Only in the land of fairy-tales is there the concept of free-money!!

@Bruce: Yes, I had forgotten about the paltry sum in the previous "stimulus" packages.

Similar to COVID, there seems to be a world-wide pandemic that infects decision makers with an almost religious-like belief in Keynesian economics!!. Our generation is piling-on ever increasing amounts of debt that our children will need to service - only time will tell if the debt was efficient

Jack: This type of debt isn't expunged by kids claiming bankruptcy - what occurs when this happens is that the unpaid amount is simply spread over the rest of the taxable community.

The fundamental Keynesian principle at play from these hand-outs is that a depressed economy is more likely to be the result of a lack in demand (and, it's OK for a country to run a deficit in bad times). Hence throwing more money at the populous should stimulate demand and therefore increase GDP - which therefore has a multiplier effect that increases wealth in sufficient quantity to allow the community to pay-back the hand-out (+ interest) through increased taxes.

Very good in theory - if the ducks are all aligned and if Americans don't simply put the money in their bank accounts, or spend it on the dark-economy, or even worse -spend it on overseas goods (the money has to be actually spent on the official local economy for the exercise to work). You are in a far better position to judge what Joe/Jane average will do with the extra money - but in an environment where the community lacks confidence and is concerned about the future, increased savings has to be a consideration!

I hadn't thought about it before, and I'm not sure of Keynes's political leaning, but the entire concept is very Marxist because it says that capitalism doesn't work without intervention by the people's representatives!! Very much at odds with the idea that in a free market, the economy will, and should be allowed to solve its own problem without government interference!
Don
Last edited: Mar 14, 2021
Mar 14, 2021 #468

It's a rigged game isn't it?

Jack@European_Parts said:
It's a rigged game isn't it?

haha!! Don't matter if it's rigged, or not rigged - it's the game that we must all play (unless there is a revolution, comrade!!

DV52 said:
The fundamental Keynesian principle at play from these hand-outs is that a depressed economy is more likely to be the result of a lack in demand (and, it's OK for a country to run a deficit in bad times). Hence throwing more money at the populous should stimulate demand and therefore increase GDP - which therefore has a multiplier effect that increases wealth in sufficient quantity to allow the community to pay-back the hand-out (+ interest) through increased taxes.

Very good in theory - if the ducks are all aligned
Click to expand...

... and you don't do it continuously! My understanding is that Keynes advocated for deficits during economic downturns, and surpluses during better times. However, that's not what has happened over the last 50 years. The US government has run a deficit every single year. Yes, they claimed to be running a surplus between 1998-2001, but that claim was bovine excrement, made possible by creative accounting; the national debt has increased every year since 1970. I blame Nixon; by ending convertibility of the US dollar to gold in 1971, he removed the last restraint on government spending of money it doesn't have, and politicians use government spending to "buy votes".

Uwe, I'm certainly no fan of Nixon, but it might be a tad harsh to identify him in particular. Let's not forget about the more recent contributions to your country's astonishing debt levels by successive Presidents on both sides.

Like Clinton's (popular at the time) repeal of the Glass-Steagall act - which subsequently permitted Wall Street to indulge in a string of very questionable practices. And didn't Clinton also spend lots of money that America didn't own on the government enabling home ownership?

And so that I don't paint a picture of blame on the Democrats - didn't Bush-the-younger's incompetent decision to finance an entirely unjustified war result in an almost doubling of America's debt?

Seems like very successive President seems to think that it's not thier problem to spend money that future Presidents must pay-back!!

DV52 said:
Let's not forget about the more recent contributions to your country's astonishing debt levels by successive Presidents on both sides.
Click to expand...

The President does not control how much money is spent. Congress (mainly the House of Representatives) does. Presidents are required to submit a budget, but that requirement is a joke; those budgets are a merely a suggestion, and every time a President has submitted a "lean" budget, Congress has effectively rejected it and done their own thing. Moreover, once Congress passes a spending bill, the money must be spent as allocated; the President cannot unilaterally decide not to spend it.

DV52 said:
Like Clinton's (popular at the time) repeal of the Glass-Steagall act - which subsequently permitted Wall Street to indulge in a string of very questionable practices.
Click to expand...

Don't even get me started on the modern banking system. All I'll say about it right here/now is that its very premise is fraudulent.

Did America's debt almost double during those eight years? Yes. But you cannot attribute all of that to the wars, and again, Congress could easily have curtailed spending on them.

Manhattan’s largest employers are starting to plan for the post-COVID future of work, and it seems most of them are giving up on the traditional way of doing things. Just 22 percent of the island’s large employers will require all workers to return to the office full-time when they do eventually...

@Jack, This is what I was expecting. So many have learned how to work remotely. Businesses have seen efficiency from many. My wife's company told her not to come back to the office - the rest of her time with the company, she will work full time from home. 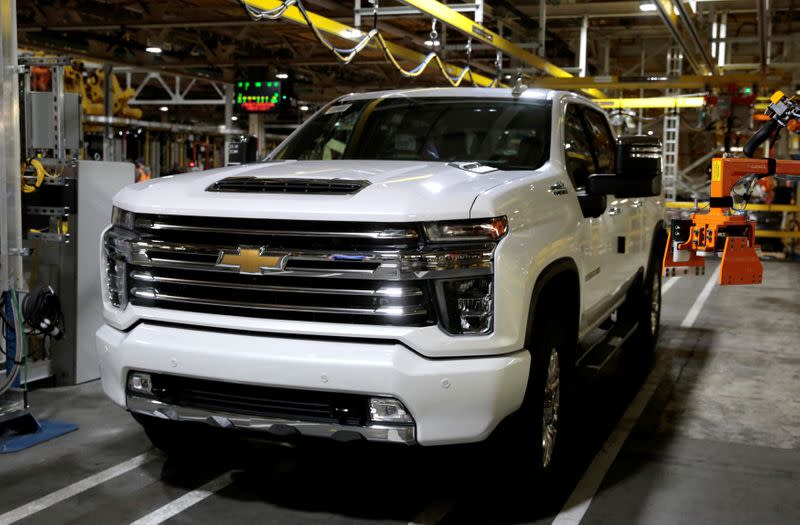 General Motors Co said on Monday that due to the global semiconductor chip shortage the U.S. automaker is building certain 2021 light-duty full-size pickup trucks without a fuel management module, hurting those vehicles' fuel economy performance. The lack of the active fuel management/dynamic...
finance.yahoo.com

Are you saying Jack that the chip shortage is bullshit?

I assure you. It is real. We are struggling to keep our lines running to keep parts in those lines.

The wafer fab operations in the far east are supposedly running at full capacity and the demand for electronics is just over the top. Also given the number of fabs that shut down owing to the pandemic, all are behind, trying to produce product that was ordered last year. We are being quoted 55 to 99 weeks on new orders.
Mar 16, 2021 #479

Nope the chip shortage is NOT bullshit but the claim you lose 1 MPG as a result of your fuel economy fleet is bullshit unless re-certified!
Mar 16, 2021 #480

Jack@European_Parts said:
the claim you lose 1 MPG as a result of your fuel economy fleet is bullshit unless re-certified!
Click to expand...

Could it be that they have already certified that engine both with and without the cylinder-deactivation system?