When I purchased my 2016 VW Passat B8 Variant it came with error code 'B137A31' in the air conditioning controller. One of the first things I did was to clear the error but it returned fairly quickly. It appears that the code is related to a problem with the air quality sensor known as 'G238' (3Q0 907 643) which detects noxious substances in the outside air and can automatically enable cabin air recirculation. Please note that this function must be enabled within the infotainment system (by pressing MENU on the air condition controller and going in to settings).

Having performed a number of tweaks on my car I didn't want to undo them in order to take the car back to the dealership for what seems like a simple fault. Herewith the steps I took to resolve the problem which has since stopped the error code from reappearing:

1) Gain access to the plenum chamber
You need to gain access to the plenum chamber by first removing the scuttle tray. To do this you need to carefully remove the foam block running along the bulkhead as highlighted as step 1 in red. Next, you must lift the rubber seal until you uncover the split between the two halves of the plenum chamber, as highlighted in green. Finally you must remove the two spring clips securing the black scuttle tray to the bulkhead so that you can move it out of the way (don't drop them down the back of the engine)! 2) Remove the rain guard to the cabin air intake
Once the scuttle tray is out of the way a little you should be able to see the rain guard (pictured below). This is secured with two clips towards the front of the car and some cutouts at the rear that hold it in place over the cabin air intake. I found the best way to remove it was to gently pull the tabs at the front forward and then once you're able to wiggle it, slide the whole thing backwards and then up to clear the air intake. 3) Remove the sensor
To remove the sensor you need to rotate it as shown in the picture, two studs will then align with holes that allow you to withdraw it from the holder. 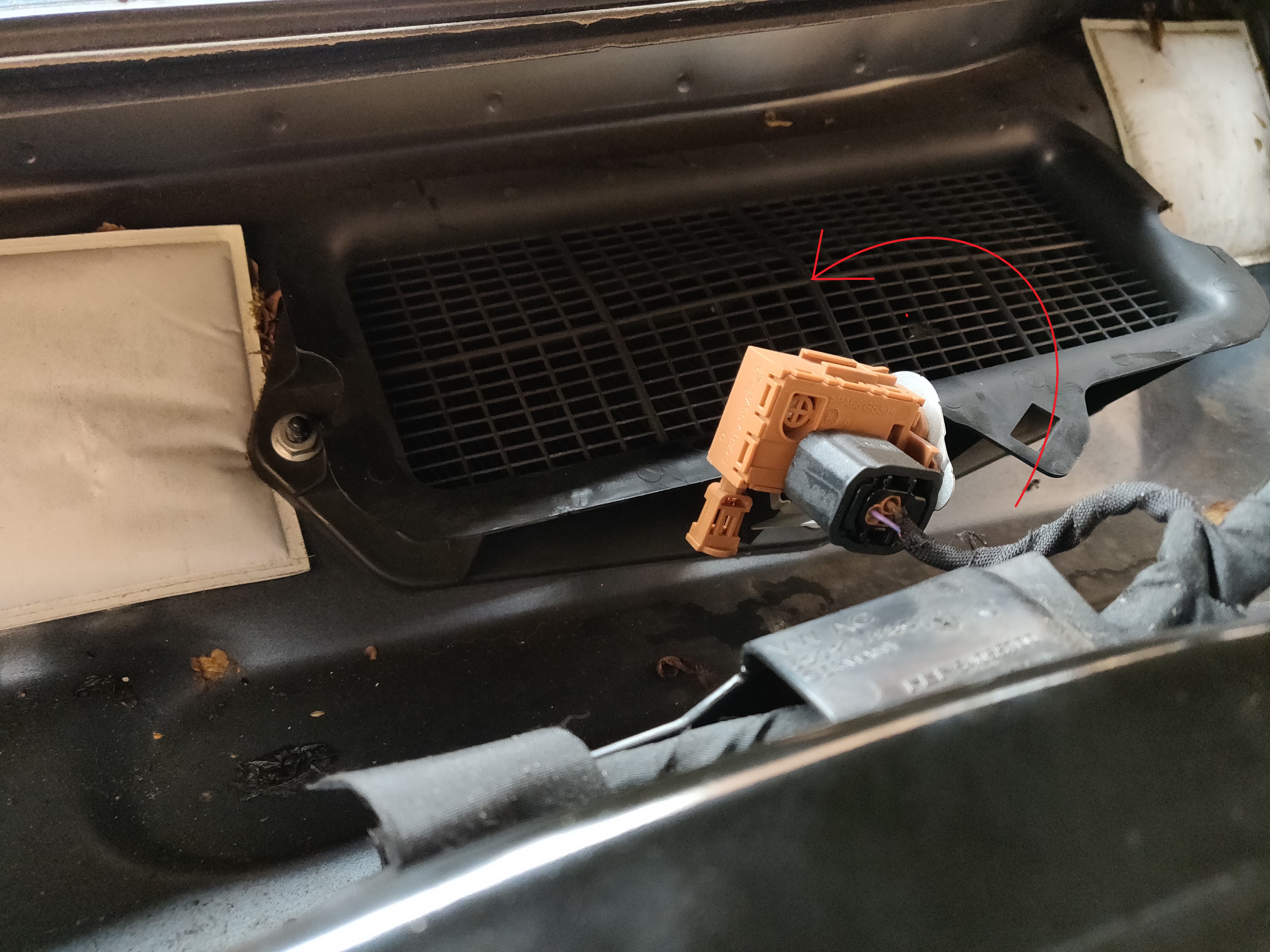 4) Clean the sensor and multiplug
Once removed I cleaned the external probe of the sensor with a clean rag, sprayed switch cleaner on to the electrical pins and did the same on the multiplug. Inserting the plug in to the sensor and removing it a few times should also help by removing any corrosion on the pins. At this point you should be able to try clearing the error code and seeing if it reappears - it didn't in my case which tells me that it was a bad connection. If you're still struggling then you may want to turn the ignition on and check the following on the multiplug: Pin 1 should have a terminal 15 supply on it (i.e. +12V), Pin 2 should be GND (i.e. battery negative), Pin 3 should be floating as it's used as in input to the air conditioning controller (pin 16 allegedly). 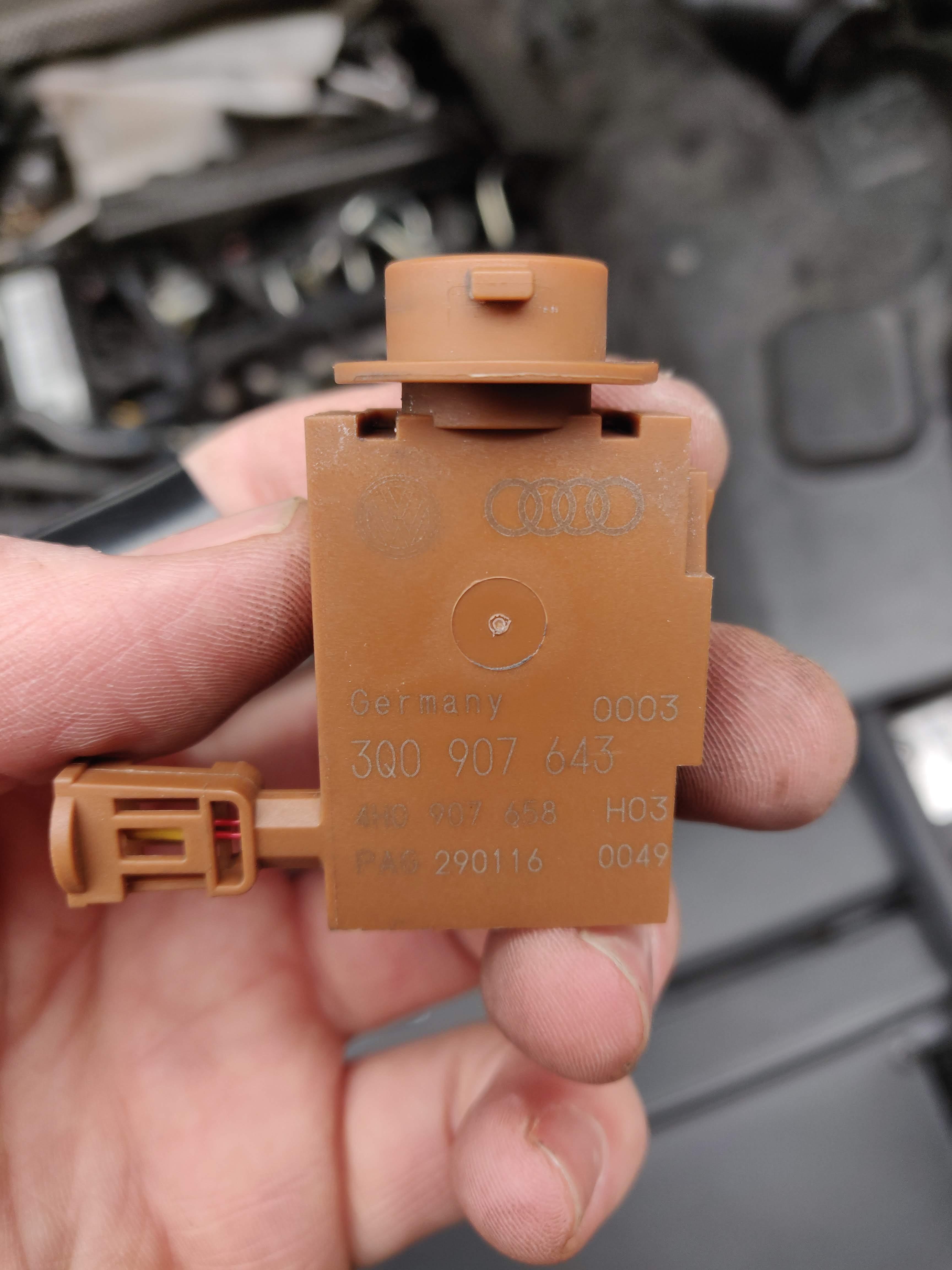 4) Reassemble
You should be able to work this one out. Just note that I had great difficulty in reattaching the rain guard with the end result being that I snapped both tabs on the front. I think I wen't wrong by not first locating the air intake within the groves at the back which means that I put an undue amount of force on the tabs at the front, doh! Nothing a healthy dose of epoxy won't put right though!
Jan 6, 2019 #2

Nice post OP but no auto-scan and this is not the how too section, it should go here.

An autoscan would add nothing to this repair procedure, so I did not include one.

I believe this post belongs in the 'Car Repair Support' section and not the 'How to's and Tips section', based on the latter's description: "How to get the best use out of Ross-Tech software and hardware". Clearly this repair procedure has nothing to do with VCDS.
Jan 15, 2019 #4

You're both wrong. Since it has nothing to do with VCDS, it belongs in General VW/Audi Repair.

Thanks for posting it though!

Please help me also with pictures with detailes about location of the sensor.
i have problems too with this sensor on my passat b8
Thaks in advance
Feb 14, 2020 #7