Unable to connect after update (release 18.9)

After updating the VCDS (release 18.9), I am not able to read codes anymore. An error windows appears (VCDS Release 19.9: Port test) with the message: Port Status: OK, Interface: NOt found! Press [OK] to open the config utility for a firmware update, Press [cancel] to abort. The system is updated though.

I was able to connect to the car and read error codes before the update, by selecting "Select Control Module" and "01-Engine". The VCDS was factory new, without any update.

Does somebody know where the problems is?

Should be a HEX-V2 and the server concurs that it's up-to-date.

Please also tell us about the PC being used. Make, model, CPU, RAM, version of Windows.

it would be strange that the PC is the problem, since I was able to read error codes before the update (same PC without internet connection).

The HEW-V2 is connected to the car and PC. Before the update, both leds were blinking in green, after the update just one led is blinking green.

I do not remember the version before the update, but the HEX-V2 is relatively new (around 3 month), so the version that comes out of the box.

bernat said:
Before the update, both leds were blinking in green, after the update just one led is blinking green.
Click to expand...

I was following the instructions from the link you sent, without success.

I send the error message: 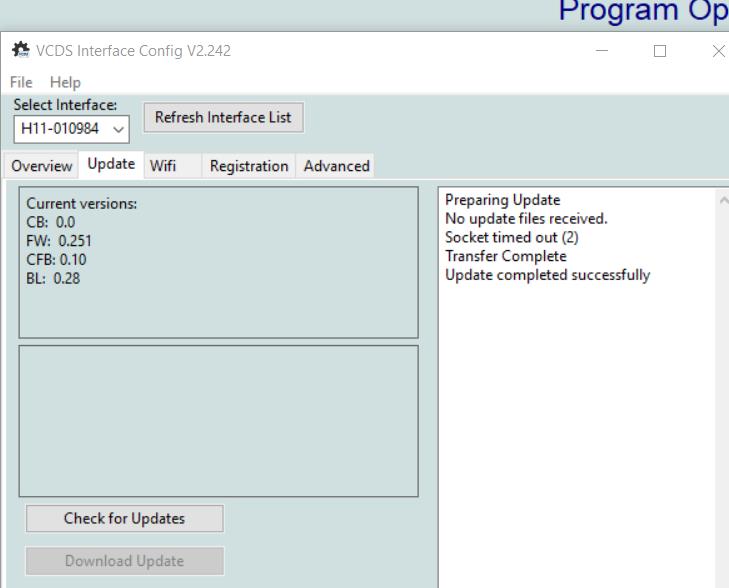 You can't link to an image on your local drive.

You need to upload that image to a server that will allow linking to it.

OK, the server thinks this interface already has a current version.

I've temporarily put that interface on the Beta channel in an attempt to get the server to give you something newer.