Can: not ready in can Car

I have issues with a HEX-USB+CAN cable. In the settings I get the error that the can is not ready, although a friend with a diffrent cable is able to do so. VCDS runs on Windows 7 and my car is a Golf MK 5, so it definitely has CAN. Did I miss something?

Thanks for your time!

If another one works and yours does not, then it seems yours is likely defective. If it is the one with the serial number you provided when you joined the forum, it is over 10 years old....

Open it up. Check connections between pins 6 & 14 of the diagnostic plug and the main circuit board.

I was not sure how much of the PCB I can show in public, so I framed just the pinheaders. There is "HEX-PRO_4" etched on the PCB. Is it normal the PCB is fixed by hot glue?
I measured the following connections:
Green connects to pin 14 and red to pin 6. All measured connections have around 4 Ohms, which is probably the measuring inaccuracy of my multimeter. Yes, hot melt glue is normal on those. It keeps the back end of the board from moving around.

You have two pads on the main board circled in green. Only one should connect to pin 14. Is it possible there's a short somewhere?

It seems like I have a short from Can-Low to Vehicle-Ground. Unfortunately, I can't spot an obvious reason on first sight. Do you have any hints?

b00nSai said:
It seems like I have a short from Can-Low to Vehicle-Ground. Unfortunately, I can't spot an obvious reason on first sight. Do you have any hints?
Click to expand...

I don't have one that old handy for reference. I suppose it could be a failed CAN transceiver...?

I can try to locate it on the PCB and replace it with another one, IF I can find another one online.
So I would conclude that I spent 270 € for a faulty cable and I should never again buy special hardware second-hand. Nevertheless, thank you for your support.

Post detailed pics of both sides of the board please. I should be able to identify the CAN transceiver.

Here is the board from both sides. 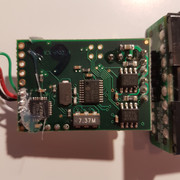 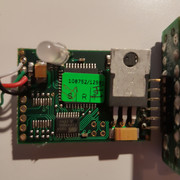 OK, so the MCP2515 in the first pic is the CAN controller. But I doubt that's where the problem is; it only controls the CAN "logic" and is not the transceiver. There should be another, separate transceiver chip, as well as two 60Ω terminating resistors. I don't see those in the pic, so I suspect they are hiding under that big TO220 package 5V regulator. Bend that up and out of the way and show us what's under it.

The MCP2551 was indeed hiding under the voltage regulator, but no sight of any resistors in the 60Ohm range. 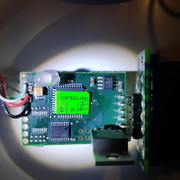 Looking at your picture in full-size, I'm wondering whether this bit of solder should be there: 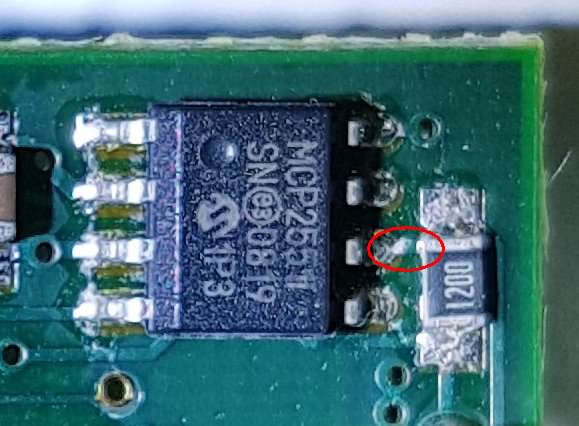 That's the CAN-L pin. You might take a dental pick or, if needed a fine-tipped soldering iron to that and see what happens.

Judging from the copper color that appears after scratching, I would say this is a valid path. I need to get myself a magnification glass, as I don't have one here. I've ordered the MCP2551 but it will take 2 weeks to arrive.
Dec 8, 2018 #16
B

I've desoldered the MCP2551 and a 120Ohm resistor between CANH and CANL on the right side. I still have a short to ground for CANL. I'll resolder the chip but I don't know where this short is coming from... 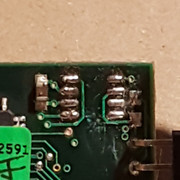 I have resoldered the chip and desoldered the plug board. I still have that contact from CAN-Low to vehicle ground. I don't know what to think of this. I cant spot any components on that board. 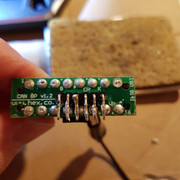 I've now resoldered another plug that doesn't have that short between CanL and VG. I matched the pinout from the old plug-board to the new one, so there should be no issues. If I connect it with the car I see the LED lighting up. If I ask VCDS to test the Interface it finds it, sometimes it tells me it is not connected to the car, or it wants to update the firmware version. It can not see the current firmware version ("Version Unknown") and from my first screenshot the most recent version should be on it (1.96). If I want to flash the firmware it hangs at 0.81%. The first 4-5 times it seemed the flash was successful, but it still could not see the firmwareversion. VCIConfig just shows a empty list..
I even resoldered the original MCP 2515, but it didn't change a thing. That was expectable because I guess the firmware runs in the ATMEL and not in the CAN-Tranceiver.
Do you have another idea or is it now finally a nice brick? 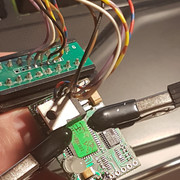 It would be great if you would take a bit of time again, even if it is only to tell me its garbage.

I ran out of ideas a while ago, sorry.

All right, then I will contact a distributor here in Germany and get a new one. I consider it "learning the expensive way" ;P
Thanks for the support!
You must log in or register to reply here.
Share:
Link
Top