Uwe said:
Yes, I can see your interface should be getting an update. I believe the problem is on our end. We migrated the update database to new hardware and a newer version of MySQL yesterday, and I've seen a couple of similar reports. So I've tried some updates here myself and get the same thing, "You are up to date" when I can see the interfaces in question clearly are not.

I'm confident this can be fixed, but I don't know what or how long it's going to take to fix it. I would hope we can get it resolved by Monday. A temporary work-around would to to uninstall the VCDS you currently have and install an older one that will work with the firmware currently in your interface. Shoot me a PM if you need help with that.

I have the exact same issue with the same response as Alex P above,


I un-installed 19.1 and reinstalled 18.9 and the temporary workaround worked.

On another note, Tank you to Uwe and others that continue to help us in the field with their work on the forums. As a result, I havn't needed to post until now.
Dec 15, 2019 #102
K

Managed to connect to the server this morning and it found the update and proceeded to update the interface just fine,
All seems to be up and running again.
Although I hoped to connect to a 2003 Ford for the generic OBD II diagnostics it would not allow this. I wasn't aware that Ford would be non OBDII compliant.
Many thanks to those who have advised on this issue.
Alex.
Dec 15, 2019 #104
M

Uwe said:
We think this is fixed now.

Hello Uwe
I don't think so :-)
Getting network error... Can't connect port 11000. Test on two computers, removed firewall, put in DMZ... nothing help.
When I returned back to 18.9 or 18.2 - program doesn't see the interface and doesn't give me ability to save config....

MoSerg said:
Hello Uwe
I don't think so :-)
Getting network error... Can't connect port 11000. Test on two computers, removed firewall, put in DMZ... nothing help.
When I returned back to 18.9 or 18.2 - program doesn't see the interface and doesn't give me ability to save config....

That would be an entirely different problem. I can verify it exists. Let me see what I can do. Stand by.

Quick trip to the office and... It should be working now, at least it is for me.

I don't see any obvious problems at this time, nor any gaps in things that happened overnight.

I also seem to have trouble updating firmware

I've been trying form vcds-mobile, the downloading works and the unit reboots but after some time Alert: Update Failed!

The self test and the advanced network test are successful. Tried several times both powerd by USB and by car. Same result ("Update failed" after the hex net reboots)

charlie_fd said:
What can I do ?
Click to expand...

You could start by telling us what versions it has in it now.

You could also try updating it by connecting it to a PC via USB and using VCIConfig.

Code:
The PC option is difficult for me (I don't have a PC running windows). If this is the only way I guess i can set a windows virtual PC for this specific task. (I've purchased the HEX-NET interface precisely because I wanted to avoid M$ Windows)
Last edited: Aug 7, 2020
Aug 7, 2020 #113

OK, I would suppose with the FW at zero, it's going to fail to update via VCDS-Mobile. Find a machine running Windows. Surely you know someone who has one. Put VCIConfig.exe and hidapi.dll on it (you don't need to install VCDS). Then update it via USB. Using a VM is quite tricky, since there is some temporary re-enumeration that happens during the update, which VMs generally won't pass to the guest OS.

I'm getting "failed to connect to server" error when trying to update firmware on hex net v2. Tried the interface updater in vcds, and the independent one in the program folder. Are there any server issues at your shop?
Oct 17, 2020 #116

Yes, there were some server issues for a while this evening. They should now be resolved.

Hi
I have a problem after update firmware. After update, I can not use my cable.

How can I solve this issue? 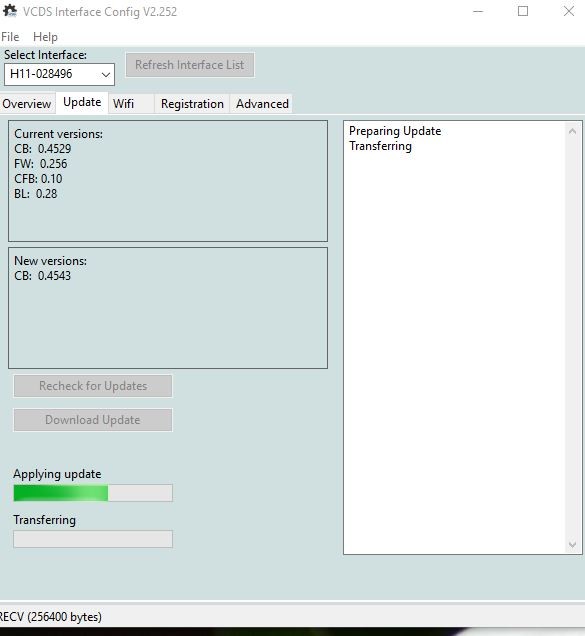 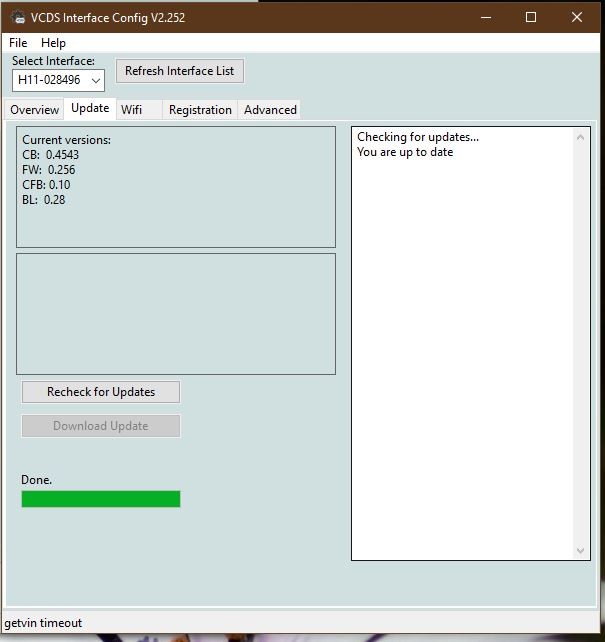 It was flashing red. I tried firmware update again. The update is finished and its color is blinking blue. I think it's ok now. Thanks for you help.


Mike@Gendan said:
If you power down the interface, then plug it into USB only (not the car), what colour are the LEDs?
Click to expand...

Long time user of mi Hex V2 cable. In fact, had a 19.x version working but since last week got a new VW group car, dusted the laptop and cable and having the same kind of errors that many other people in the past.

Seemed that cable needed a firmware update with the 21.3.0 version I just installed and... it say it cannot connect to Outgoing TCP Port 11000

This is what it throws:

Tried everything, rebooting, uninstalling, reinstallling, different internet connections (wifi from home, thetered from mobile phone and such with no luck), deactivated windows firewall and many more.
You must log in or register to reply here.
Share:
Share Link
Top