Anyone search for 'VCDS-Mobile' in the App Store recently?

Love the beeper function too !

I have one request for Shaun though... I'd like it to play this as a 'ringtone' when you press the button:

I like it.... Now for the first "serious" enhancement request (with all due respect to jakematic

) - Can you guys make this work when the iDevice is sourcing the WiFi network via the built-in iOS7 "personal hotspot"? It worked great on my home network (where of course I already know the IP) but says it's not connected when my phone is in hotspot mode. 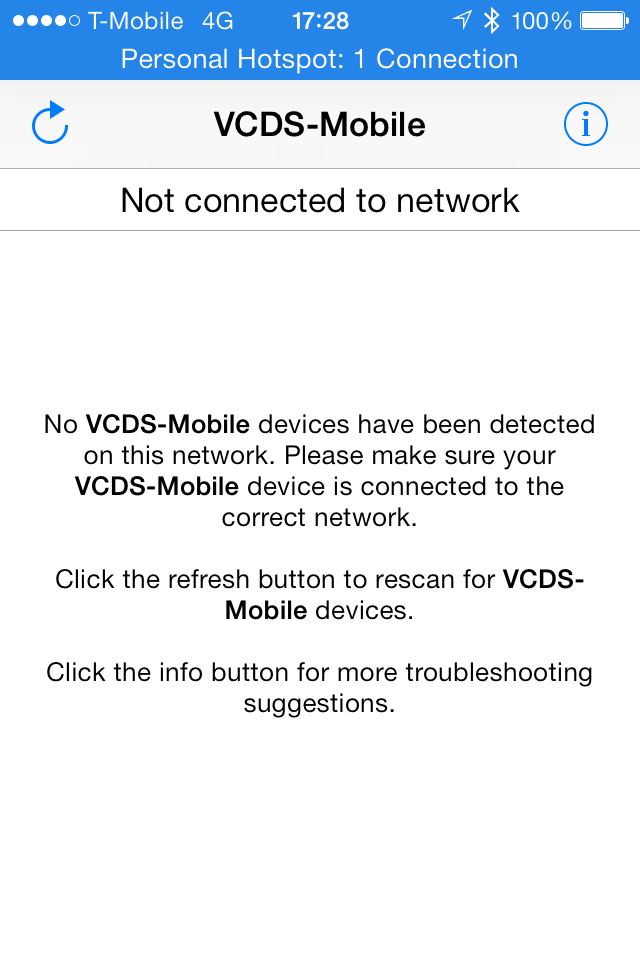 Honestly, I'm not sure that's possible.

Huh, I haven't had a chance to try with hotspot yet.... good catch solomon.

Having used Fing and iNet in hostpot mode before I do know:

I bet if the broadcast packet was sent to the 172 network it would pick it right up.

That said, it would mean hardcoding the app... which as a programmer gives me the shivers.
There should be a way to find the subnet of the broadcasting hotspot and check it though.
Last edited: Aug 26, 2014
Aug 26, 2014 #9
S

jakematic said:
the DHCP range is 172.20.10.X with iOS 6 and later
I bet if the broadcast packet was sent to the 172 network it would pick it right up.

That said, it would mean hardcoding the app... which as a programmer gives me the shivers.
There should be a way to find the subnet of the broadcasting hotspot and check it though.
Click to expand...

I've not tried playing with ifconfig or similar (my iPhone is jailbroken) to see, but I'd imagine there are well-defined networks corresponding to WiFi and Cellular. Whether Apple allows mere userland apps much access is another story

I tried hotspot first (well Ok, second - I did try WiFi to be sure it worked) because that's exactly the usage model that limited me in Germany

I foolishly (I was really busy, the dog ate my homework, etc) didn't try the setup in the US and then found in Germany that I didn't know the IP of the Hex-Net on my hotspot

Plus I could see this being a common "help a buddy" mode where I just use my own phone hotspot network to connect Hex-Net.

I *think* the iPhone is .2 for some reason but can't find anything to corroborate that.

Ooooh... look what just showed up in the App Store romad said:
So, did it improve your hotspot problems?
Click to expand...

Sorry it took me a few days to get a round tuit, but I was able to test 1.0.1 in hotspot mode and it simply works! The app shows "Connected to network: Not Found" but auto-detects the HN and connects up to it quite easily.

Thanks Ross-Tech, this makes a HUGE difference in the usability on iOS HotSpot!!!!

without a hex net to test yet, does the ios app scale in resolution according to the device used? i.e.,will the icons and text on a larger device such as an ipad air look more grainy compared to smaller device such as iphone?
Oct 1, 2014 #18

Not having a HEX-NET doesn't prevent you from downloading and installing the app.

Remember, the app doesn't do much except locate the HEX-NET for you on your network and then open a browser, either separately or in the app itself, so in the end, what really matters is the browser.

thanks for the quick reply uwe! I've download the app to both my iphone and ipad already, but without a hex net device, it won't allow me to proceed to the browser.

as a comparison, with a Lenovo thinkpad 10" tablet running windows 8 running vcds (not mobile), I found the user interface windows could not be maximized to fill the entire display. I was hoping vcds mobile browser would allow the screen real estate to be fully utilized.
Oct 1, 2014 #20

Did you tweak the window size in the options screen?