Old vid but a neat installation:

I would rate both of them equally.

So range and cost are a trade-off. You can make a reasonably priced EV with a range of 100-200 miles, which would be entirely adequate for 90-some percent of use cases; commuting, grocery getting and so on, but it would suck horribly for any kind of road trip, so people generally won't buy that. They want something with the range they're used to, which means at least 300 miles. But to get 300 miles of range, you need something like 100 kWh of batteries, which will cost $10,000 to $15,000 to make. That's an expensive fuel tank!

Tesla has built out an extensive network of Superchargers in the US, so at least for them, infrastructure isn't really a problem. They're located along major interstate highways too. This one is at a "Truck stop" on Interstate 81 in rural Virginia. IIRC, it has ten or so charging bays. My wife sent me this picture earlier today when she stopped there for fuel. There were actually four Teslas looking forlorn while charging, 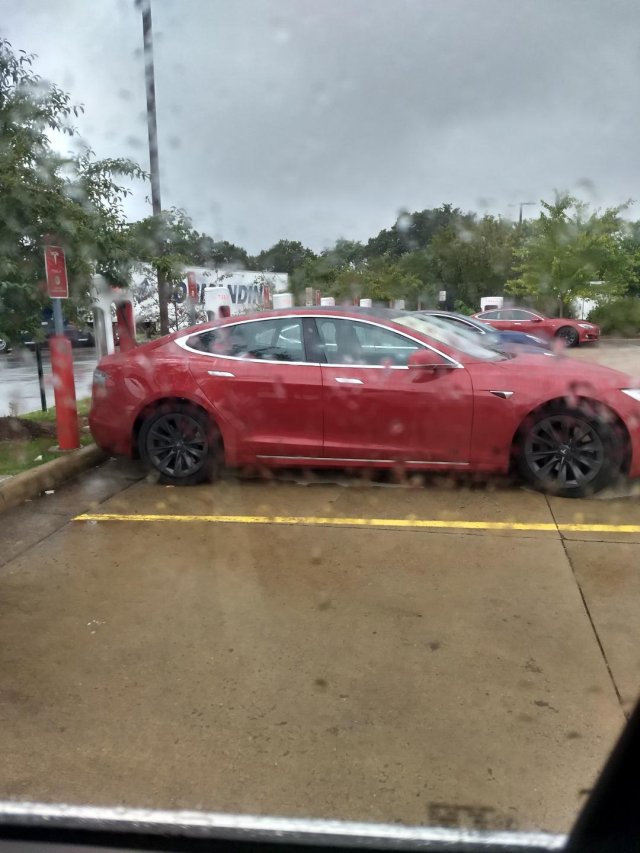 We stop there fairly often because that place has some of the cheapest diesel fuel anywhere our regular road trips. We've never seen more than one Tesla charging there, and more often it's none.

When we stop there, we get up to 700 miles of additional range in under 5 minutes.

Wow, so this is a thing:

A dating service for people wanting to charge their electric cars for money. Vehicular prostitution if you will.
Aug 24, 2019 #588

I really don't see how this is different than all the other for-pay ev chargers?

If I am charging my vehicle at home, I am either paying the electric company, or paying the solar panel company.

If I am out and about and looking to charge, I am either using the goodwill of some free charging station, or paying through one of the existing ev charging networks.

This incentivizes people to more readily share their home chargers (which again are not free unless perhaps you have already paid for the capital investment into solar), so that people on the move can access them in a convenient manner.

Sure beats running an extension cord, or the whole vehicle into someone's yard so they can plug in the car.
Aug 27, 2019 #590

in case you want to order one right now

this should be interesting

In the case of the Taycan, the actual voltage sits somewhere between 610 (depleted) and 835 volts (when full)
Click to expand...

With 198 cell strings, they are not babying these cells. That's 4.22V per cell full, and 3.08V empty. Pro-tip: If your Taycan spends a lot of time sitting the the garage, do not keep the battery full. It will last a lot longer if the cells are down at or below 4.0V when just sitting around doing nothing.

Uwe said:
With 198 cell strings, they are not babying these cells. That's 4.22V per cell full, and 3.08V empty. Pro-tip: If your Taycan spends a lot of time sitting the the garage, do not keep the battery full. It will last a lot longer if the cells are down at or below 4.0V when just sitting around doing nothing.

Coming from a TDI where we vent the tank and fill them all the way up the filler neck and don't think twice about it... that's got to be one of the most annoying things about battery powered vehicles.

The range is already meh, but to protect the crazy money you spent on the vehicle and ensure a properly long battery lifetime, you have to reduce the range even further by not charging the batteries above a certain point.

Yep, we get about 700 in our Touareg V6 TDI. I don't care how fast an electric car is in theory; the moment a trip length exceeds that car's range, I'll get to the destination sooner. My wife and I did a 600 mile run on Saturday. We stopped twice; once for fuel & potty (~10 mins) and once just for potty (~5 mins). The trip was under 9 hours, door-to-door.