I did some logging on the way home (flooring it lots) and it's interesting to see the relation between "E-machine current actual value" and rpm: 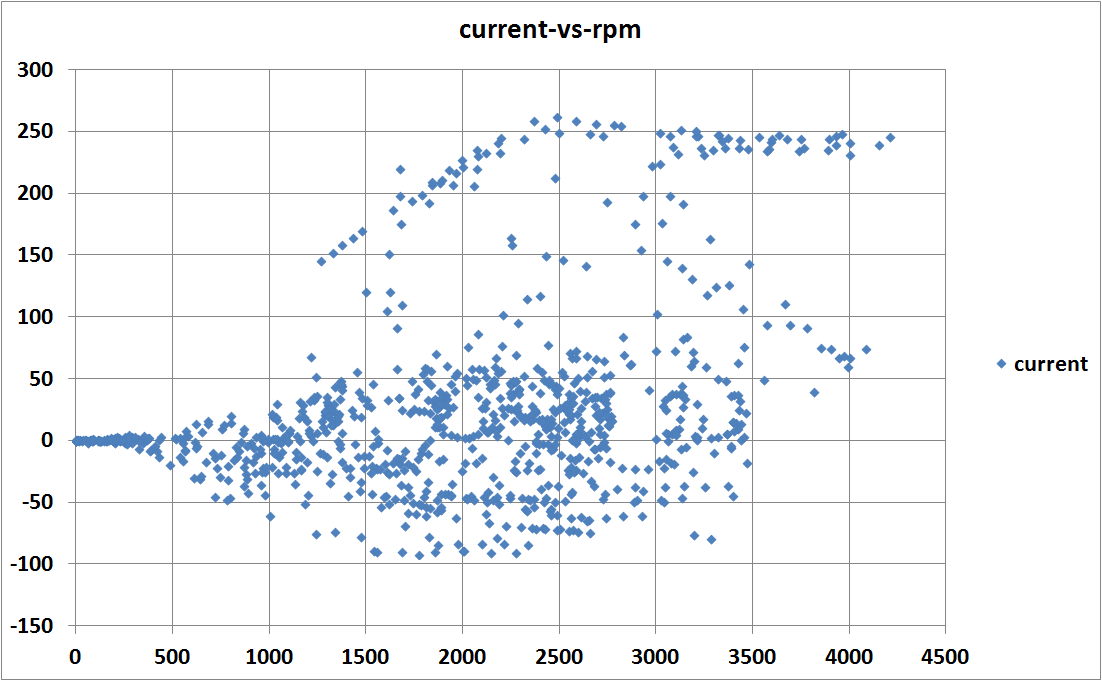 World's first electrified road for charging vehicles opens in Sweden
Stretch of road outside Stockholm transfers energy from two tracks of rail in the road, recharging the batteries of electric cars and trucks


The world’s first electrified road that recharges the batteries of cars and trucks driving on it has been opened in Sweden.

About 2km (1.2 miles) of electric rail has been embedded in a public road near Stockholm, but the government’s roads agency has already drafted a national map for future expansion.

Sweden’s target of achieving independence from fossil fuel by 2030 requires a 70% reduction in the transport sector.

The technology behind the electrification of the road linking Stockholm Arlanda airport to a logistics site outside the capital city aims to solve the thorny problems of keeping electric vehicles charged, and the manufacture of their batteries affordable.

Energy is transferred from two tracks of rail in the road via a movable arm attached to the bottom of a vehicle. The design is not dissimilar to that of a Scalextric track, although should the vehicle overtake, the arm is automatically disconnected.

The electrified road is divided into 50m sections, with an individual section powered only when a vehicle is above it.

When a vehicle stops, the current is disconnected. The system is able to calculate the vehicle’s energy consumption, which enables electricity costs to be debited per vehicle and user.

The “dynamic charging” – as opposed to the use of roadside charging posts – means the vehicle’s batteries can be smaller, along with their manufacturing costs.

A former diesel-fuelled truck owned by the logistics firm, PostNord, is the first to use the road.

Hans Säll, chief executive of the eRoadArlanda consortium behind the project, said both current vehicles and roadways could be adapted to take advantage of the technology.

In Sweden there are roughly half a million kilometres of roadway, of which 20,000km are highways, Säll said.

“If we electrify 20,000km of highways that will definitely be be enough,” he added. “The distance between two highways is never more than 45km and electric cars can already travel that distance without needing to be recharged. Some believe it would be enough to electrify 5,000km.”

At a cost of €1m per kilometre, the cost of electrification is said to be 50 times lower than that required to construct an urban tram line.

Säll said: “There is no electricity on the surface. There are two tracks, just like an outlet in the wall. Five or six centimetres down is where the electricity is. But if you flood the road with salt water then we have found that the electricity level at the surface is just one volt. You could walk on it barefoot.”

National grids are increasingly moving away from coal and oil and battery storage is seen as crucial to a changing the source of the energy used in transportation.

The Swedish government, represented by a minister at the formal inauguration of the electrified road on Wednesday, is in talks with Berlin about a future network. In 2016, a 2km stretch of motorway in Sweden was adapted with similar technology but through overhead power lines at lorry level, making it unusable for electric cars.

This article is part of a series on possible solutions to some of the world’s most stubborn problems. What else should we cover? Email us at theupside@theguardian.com
Click to expand...

I hope electric charging roads, and electricity generating roads, along with wind generators along highways will become the standard infrastructure of the future.
Apr 18, 2018 #224
D

VW's Electrify America is installing (PDF) EV chargers at more than 100 Walmart stores across 34 states, with the rollout finishing by June 2019. And these won't be frugal installations, either -- they're some of the first 150-350kW DC fast chargers built to handle next-generation EVs. They should be three to seven times faster than the 50kW chargers you typically see today, so you may come back to a completely recharged car if your shopping trip is long enough.
Click to expand...

Eric said:
Based on the picture, looks like a choice between free(?) electricity and a cart-dent free car.
Click to expand...

I seriously doubt it will be free. I understand some places offer free charging at present, but that situation is not sustainable as the number of BEVs and PHEVs increases.

Heck, even Tesla no longer offers free charging on their own network for the cars they're selling now.

Vehicles capable of charging at that higher rate aren't on sale yet, but by sheer coincidence that matches the specs of forthcoming Battery EVs from... Volkswagen Group.
Click to expand...

MMMM = No charge needed and on demand power unit.

Laugh at me now .....world is about to make a transition!

Laugh at me now .....world is about to make a transition!

It isn't battery or solar or wind either .......it's rare Earth or Hydrogen!
Click to expand...

Be careful what you're asking for there mate

Trade Member said:
Be careful what you're asking for there mate

Exactly! You're in the UK, so there may be enough time to figure out how to seal the black hole before the event horizon reaches that side of the pond. I am about 1.3 km from ground zero, and pretty much a goner within seconds.....

For me it is more about proving over educated technical people wrong & who fail to see something right in front of them for shear simplicity dismissed.
May 18, 2018 #235

What does Bosch know maybe?

^^^ I wonder what the range is under those "extreme temperatures"?

I also wonder how they got the electricity to recharge it. Can you say, "Diesel generator"?

still a cool video. I love the vw/audi arctic promo's of crazy drifting.

My Aunt and her partner recently bought a new Tesla model S P100D, and a new e-Golf... and a 67 Corvette and a new Holden Commodore SS Redline 6.2 V8.

I'm not convinced they went electric to save the planet