Been reading about the incredible rise in the exchange rate for bitcoins, but as an investment- it seems far too good to be true. Not sure if it's a demand driven phenomenon - by those who are paying ransom ware, or if it's the result of those who just want to avoid their country's tax laws - but the chart below is interesting (from Wikipedia): 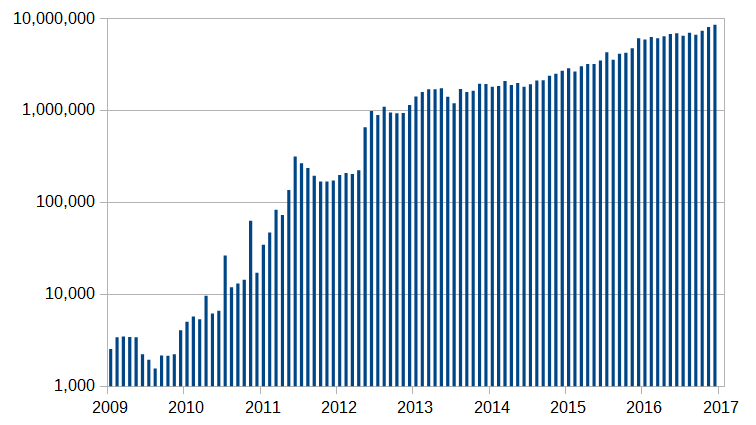 Bitcoins as a concept is blurring the line between currency and commodity!

Total Bullshit /\.........totally speculative and I look forward to the short of it once again!

Trading bit coin now would be like me going to sell cars at the auto-auction & with no bidders in the lanes other than phantom bidders.

That's what happens when you store your data on a cloud or hard-drive you scan the web with.

DV52 said:
by those who are paying ransom ware
Click to expand...

I don't think too many people have actually paid ransom:

DV52 said:
Been reading about the incredible rise in the exchange rate for bitcoins, but as an investment- it seems far too good to be true.
Click to expand...

Can you say speculative bubble?

Can you say speculative bubble?

If you think this is a good investment, I have some tulip bulbs for sale...
Click to expand...

At least the flowers come up every year and bit coin might not.

Fun fact, during the Dutch tulip frenzy, a wealthy merchant had a sailor waiting in his office who found what he thought was an onion. The sailor peeled and was eating it when the horrified merchant walked in to discover his "valuable" tulip bulb had just been consumed.
May 26, 2017 #7

Jack@European_Parts said:
Want something safe put it on a DVD and a mirror drive that is isolated.........for fuck sake, get a raid.....
Click to expand...

RAID will not prevent a drive-encrypting malware from doing it's thing. On the contrary, the increased number of available spindles for the re-writes will speed up the infection process!

As for Bitcoin, it is the preferred cash of the underworld. If you think that the black market, piracy, terrorism, and narcotics trades will continue to grow, you might want to add some to your portfolio's asset allocation.

If you want another opinion, the frequency of the keyword "Blockchain" (an important part of Bitcoin's function) has been increasing in both investor and non-technical professional newsletters over the past month. This could be a good sign for continued growth in Bitcoin, since they are now targeting investors and the public.

Help me with my hyphosis. Did you recently see an article about Bitcoin investing on a web site or newsletter mailing?????
May 26, 2017 #8

^^^ vreihen: I agree with your skepticism about the legitimacy for bitcoins as an investment, but your second point appears to be true - the currency (commodity?) does appear to be maturing and what was a narrowly traded item seems to have now broadened its appeal. I would personally not invest in the thing at this time, but it's still an interesting dynamic to watch. Maybe you are correct - the increased interest is bitcoins comes from those who want to launder money - so maybe the graph in my first post mimics the increasing activities of the black market.

But if the famous vreihen millions are just shoved in the sock drawer (doing nothing) and you don't want to pay tax on the interest (and if you are prepared to take the risk)- perhaps ?

PS: As to whether the tulip analogy is appropriate , or whether a better comparison is the early days of Google share price - only time will tell!
May 26, 2017 #9

DV52 said:
PS: As to whether the tulip analogy is appropriate , or whether a better comparison is the early days of Google share price - only time will tell!
Click to expand...

That comparison might have been valid when bitcoin was worth a few orders of magnitude less than it is today.

My skepticism with bitcoin as an investment (as opposed to a speculative play) is that that it's overly dependent on technology, while at the same time, advances have the potential to kill it completely and instantly.
May 26, 2017 #10

EMP with a twisted solar storm says your bit coin isn't worth a coil snake in the tall lawn land mine field.

Speaking of "pump and dump" and growing pains.....

A dramatic rise in the value of bitcoin caused the world's largest cryptocurrency exchange to grind to a halt and fall offline.

Bitcoin rocketed from $1,250 (£970) per coin to just under $2,800 in the space of a month, and gained by some $300 on 25 May alone. This, along with media coverage tracking the surging value, brought huge numbers of users to online exchanges, where bitcoins are bought and sold for fiat currencies like pounds and dollars.

As a result, Coinbase, the world's most funded bitcoin exchange, which operates in 32 countries, could no longer cope with demand. The site became slow, new accounts could not be created, and eventually it fell offline.

Customers new to bitcoin, but keen to invest due to stories of early investors earning millions, also flooded the exchange, setting up new accounts and throwing speculative cash into what quickly became a bubble ready to burst. Hours later, with bitcoin knocking on the door of a record high of $2,800 and Coinbase offline, bitcoin tumbled to $2,300.

A partial recovery has taken bitcoin back up to $2,600 at the time of publication, but the fall acted as a stark reminded of the turbulent days of 2013 and 2014.

Coinbase told TechCrunch: "The market cap of digital currencies has increased ~50% to $91bn in the past week. As a result, Coinbase has seen a dramatic increase in traffic and trading volume. The Coinbase engineering and support teams have been working around the clock to keep up with this unprecedented volume.

"However, Coinbase.com has suffered a few outages including degrade performance and deposit/withdrawal delays for some users. We are actively working on resolving these issues and restoring our site to normal performance."

According to the exchange's support website, almost all functionality has been restored. However, at the time of writing Coinbase's credit and debit card handling system is suffering from "degraded performance".

Kraken, another cryptocurrency exchange, was also unavailable for several hours on 25 May as traders fought to earn a quick buck on bitcoin's gains. A status page reports degraded performance for the site and customer support system.
Click to expand...

It seems that the currency (commodity?) price spiral is entirely a demand driven dynamic.The modest price drop after the exchange fell-over is symptomatic of this effect. But assuming the demand is still there, the lower value is the signal to buy (for profit takers to sell when confidence in the exchange is re-established). With the new market cap of $91bn, bitcoins are starting to attract a "too-big-to-fail" status. Not that any government will step-in if the price tanks, but at this capitalized value, there are many bitcoin holders with a vested interest to make the currency (commodity) secure!!

Of course the real signal that bitcoins are an acceptable investment will be the introduction of a futures market - this normally happens in exchanges when a currency (commodity?) experiences this level of price volatility.

As I have said previously, the strategy for a wise investor is always to "get-in before the hoarders"!

Ethereum is the latest balloon they've started to blow... Small-time miners have bought all the top-tier AMD VGA cards (all the x70..x80 card from the the current and previous generations) so PC builders are left without options but lower-end cards or GTX 1070s, 1080s not worth to buy unless you play big time ..

I'll have to postpone my build, since the very few new pieces left now sell for nearly double the price.

Jack@European_Parts said:
This high-school dropout who invested in bitcoin at $12 is now a millionaire at 18
Click to expand...

Not really, not until he cashes out, and then he has to pay capital gains taxes...
Click to expand...

True but we don't know what he did or if he put in an IRA or SEP linked to a brokerage and if it was me I'd sell half at the very least and invest it in other markets......all the while not paying a dime to the tax man until I had to.
Jun 21, 2017 #18

The difference between bitcoin and a cake is that a cake is delicious, even if it's only you eating it. At the very moment a certain amount of BTCs contingent is on sale, rates will drop, which will make others sell too, ending the spiral somewhere deep.
The trap in BTC is that its value is coming from actually owning it, but not selling it. Since you can't print new bitcoins like money (supply is fixed), deflation eliminates any goods or services to be offered for pretty quickly.

So I'm not impressed when I'm looking at how much those bitcoins would worth if... After all, these currencies look something apparently invented for terrorists, blackmailers, tax evaders and speculators.
Jun 21, 2017 #19

^^^ You forgot drug dealers, arms brokers, organized crime syndicates, and anyone else who does not want to leave a paper trail behind.....

vreihen said:
^^^ You forgot drug dealers, arms brokers, organized crime syndicates, and anyone else who does not want to leave a paper trail behind.....

Yeah, I missed a lot out of these groups, so cryptocurrency owners can be proud to be a member of this prominent group... 24/7 NSA surveillance included in service